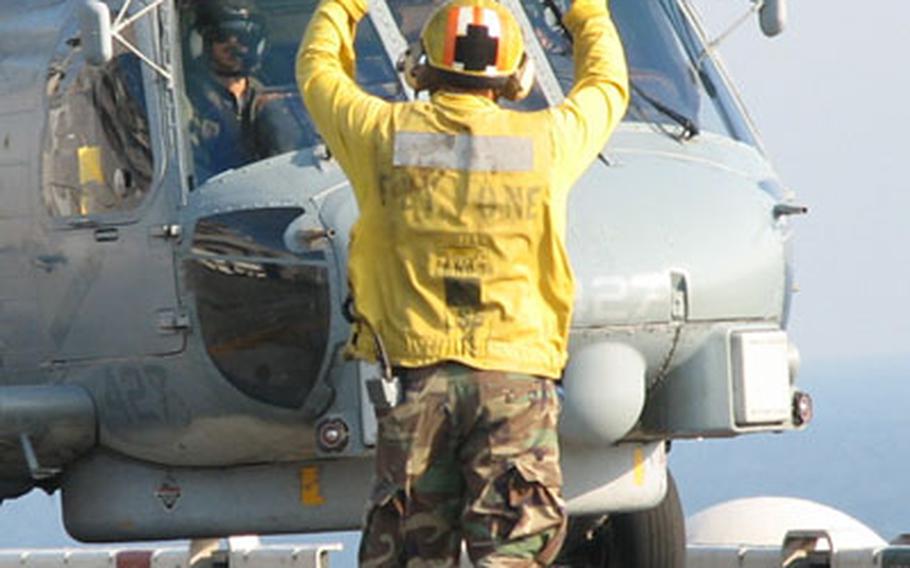 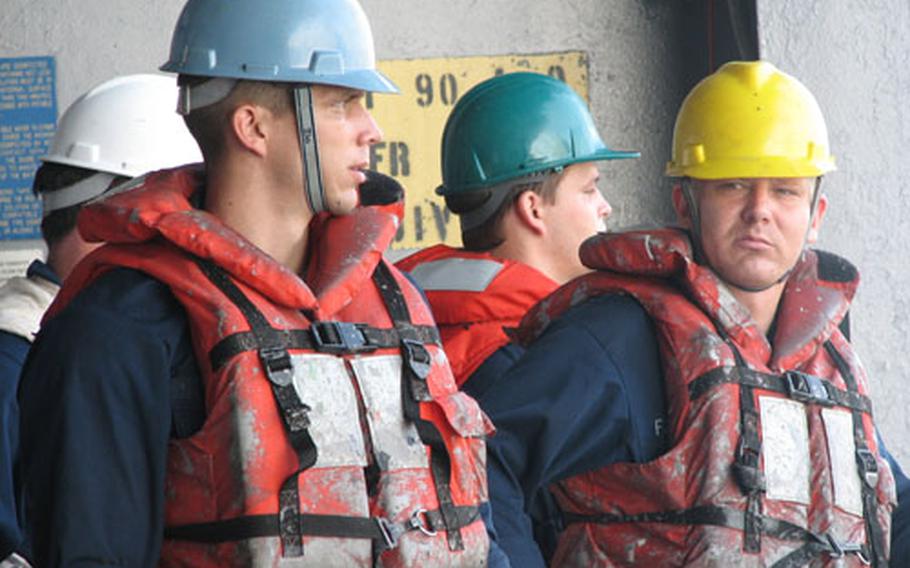 Sailors take a break aboard the USS Kearsarge in the Persian Gulf during an underway replenishment with the USNS Leroy Grumman supply ship. During the operation, pallets of supplies are transported between the ships via cables while the ships are steaming through the water alongside each other. (Scott Schonauer / S&S) 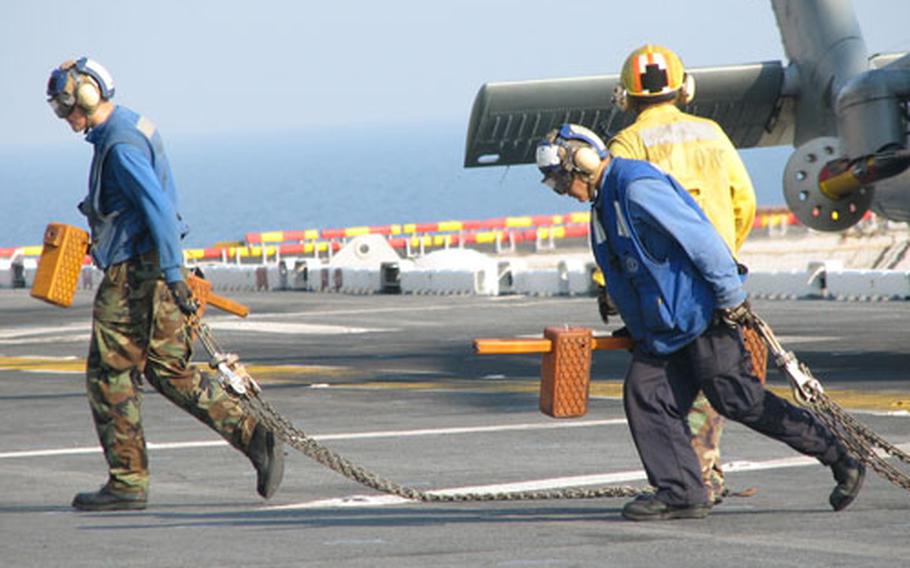 A pair of sailors haul away chains and landing gear blocks before a SH-60 Seahawk helicopter takes off from flight deck of the USS Kearsarge in the Persian Gulf last week. (Scott Schonauer / S&S) 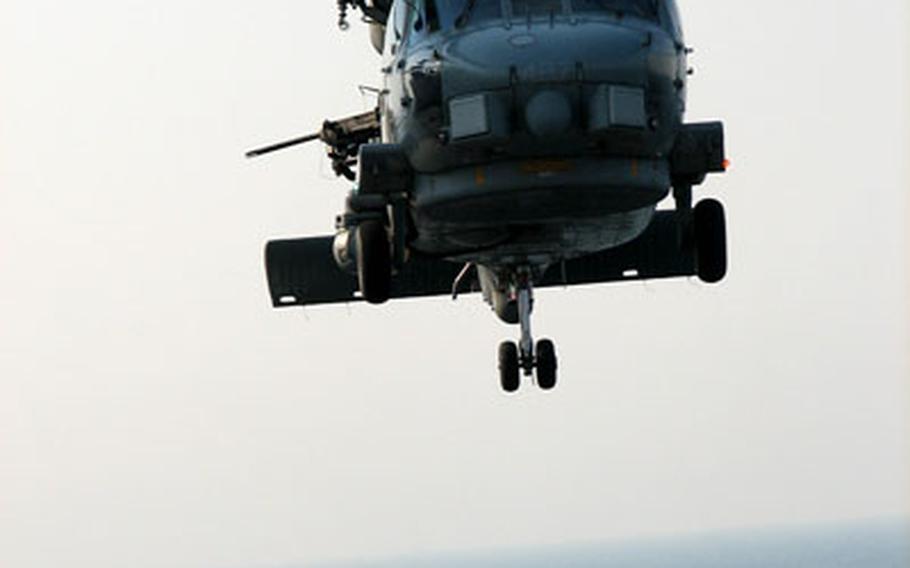 An SH-60 Seahawk helicopter prepares to land aboard the USS Kearsarge in the Persian Gulf. (Scott Schonauer / S&S)

ABOARD THE USS KEARSARGE, Persian Gulf &#8212; The United States and Iran have publicly clashed over numerous issues and political tensions between the two adversaries remain high.

But in the crowded Persian Gulf, U.S. and Iranian warships go out of their way to avoid any provocations.

While political leaders for both countries aren&#8217;t exactly on speaking terms, sailors on U.S. and Iranian naval ships talk all the time. That&#8217;s because the ships often come within miles of each other in the gulf&#8217;s international waters.

It can be tense sometimes, but commanders aboard the amphibious assault ship USS Kearsarge say interactions with Iranian ships are brief and &#8220;professional.&#8221;

The reason it happens so much is because the gulf is not that big &#8212; about 615 miles long and 230 miles at its widest point. Considering the dozens of oil tankers and cargo ships along with warships from various nations sharing the same space, it is easy to see why ship drivers must be alert and able to communicate.

He doesn&#8217;t mean the ships literally bump into each other. But they do get close enough to require a slight change of course. To avoid an accidental collision, U.S. sailors keep in close contact with their Iranian counterparts much like they would any other military or commercial ship operating in the area, commanders say. They will even let the Iranians know beforehand when they will be conducting flight operations.

While interactions between the U.S. and Iran warships have been cordial, they both routinely conduct surveillance on each other. Last week, an Iranian P-3 spy plane circled above the Kearsarge and its ships. But it hardly caused a stir among some of the unsuspecting sailors below the top deck.

Commanders say that in the past three months the Kearsarge group has been in the area it has had only &#8220;benign&#8221; interactions with Iranian ships. Although Iranian navy ships will occasionally ask a U.S. ship for its hull number while in transit, communications have been courteous.

American warships bring considerable firepower to the gulf, but officers said the important thing is they are not looking to escalate matters. The Kearsarge Strike Group consists of eight ships, six AV-8B Harriers and attack helicopters. Not too far away in the Gulf of Oman is the USS Enterprise and its complement of F/A-18 fighters.

&#8220;While we&#8217;re here, we are not looking to start a war or start any aggression with Iran, by any means,&#8221; Gregorski said. &#8220;We are just going to continue to operate like we would operate in any ocean in the world, and when we have encounters with the Iranians they will be professional and there will be some cooperation on both sides like there has in the past.&#8221;

President Bush warned last week that a nuclear-armed Iran could lead to World War III. But Vice President Dick Cheney said Sunday the United States and other nations will not allow Iran to obtain a nuclear weapon.

American commanders also point out that there is a difference between the Iranian navy and Iran&#8217;s Revolutionary Guard Corps, which has been more aggressive against the United States and its allies. In March, Iran&#8217;s Revolutionary Guards seized 15 British sailors and Marines patrolling in the gulf, accusing them of illegally entering its territory. They were released two weeks later.

Navy Lt. Pete Pascucci, the staff judge advocate for the Kearsarge Strike Group, said U.S. ships adhere to international law when it comes to territorial boundaries, staying 12 miles off shore in international waters. Iranians might not like having American warships so close to their coast, but, Pascucci said, &#8220;we both have the right to be here.&#8221;