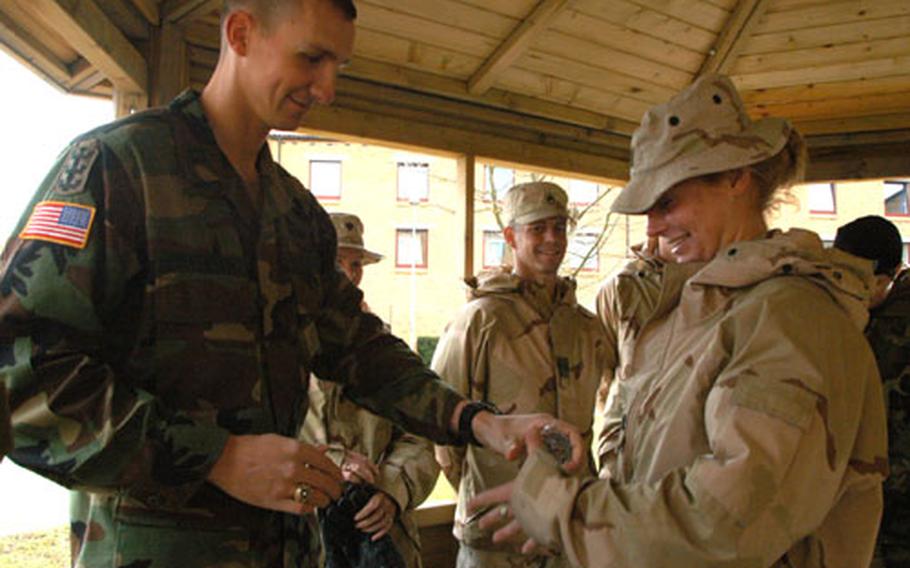 Editor&#8217;s note: Stars and Stripes reporter Rick Scavetta is embedded with the 94th Engineer Battalion, a Vilseck, Germany-based unit that has returned from Iraq following a yearlong deployment. This is the last in a series of articles about the soldiers&#8217; return to Germany.

VILSECK, Germany &#8212; Before soldiers from the 94th Engineer Battalion signed out for a well-deserved vacation, they completed the U.S. Army Europe reintegration program &#8212; seven half-days of briefings geared toward the soldiers&#8217; finances, health and well-being.

Most troops were glad to see an Army plan to care for their needs after returning from a combat zone.

&#8220;The information was pretty good and it got us slowly integrated back into real life,&#8221; said Staff Sgt. Tinitali Tupuola, 33, of Samoa.

While some found the briefings helpful and informative, others were just glad they didn&#8217;t have to head right back to their normal Army life.

At the USAREUR level, senior leaders have planned for months to receive returning soldiers. They published pamphlets and launched a Web site to assist soldiers. Experts on everything from personnel issues to medical and behavioral health contributed to USAREUR&#8217;s plan for the first week of reintegration. From Bamberg to Baghdad, Gen. B.B. Bell, USAREUR commander, drilled the concept into his commanders&#8217; heads.

In many cases, the plan in action was similar to what USAREUR staff officers discussed several months ago.

But soldiers also had plans of their own.

Younger troops, a mostly single crowd who had few opportunities to blow off steam during the past year, often found the half-day of work a hindrance to their party schedules. Married soldiers found themselves juggling family commitments.

The briefings were short. The medical screenings and records checks were streamlined. Soldiers quickly fulfilled their required duties and left to run personal errands.

Like other veterans of past conflicts, Wheeler was pleasantly surprised to see the Army&#8217;s new attitude toward returning troops. At least, there was something for them this time, veterans said.

After Operation Desert Storm, when Wheeler returned to Fort Hood, Texas, with the 1st Cavalry Division, his leave form was already signed when he marched into a base gym for his unit&#8217;s homecoming.

In 1994, when Sgt. 1st Class Darnell Davis returned to Fort Eustis, Va., after a four-month tour in Haiti, little was done to help soldiers adjust, he said.

A 17-year Army veteran from Washington, D.C., Davis had never before deployed with a family waiting for him. Now he has a wife, Shashana, and their sons, 3-year-old Jalen and 1-year-old Javon. He said he wished he had brought his wife to some of the sessions, such as the chaplain&#8217;s briefing.

The biggest hurdle faced by many troops was fighting a hangover the next day after each night of partying. Coming home, it seemed, was the perfect reason to drink.

Davis counseled some younger soldiers who were overdoing it. At least one soldier was found driving under the influence. A few off-duty soldiers got into fights. Some showed up to work in bad shape.

Nevertheless, two privates from the battalion wound up drunk on duty and were sent to the military police station. Both soldiers were flagged, which means they are not allowed any favorable actions, to include signing out on leave.

Overall, most soldiers understood that the USAREUR program is part of an Armywide effort to avoid problems like the killings at Fort Bragg, N.C., where in summer 2002 four soldiers returning from Afghanistan murdered their wives.

While the soldiers returning to Europe remain on duty for a week, they can be monitored while they adjust to garrison life.

After a year in combat, the engineers were more than willing to follow orders to fulfill USAREUR requirements and head home on leave.

Cpl. Stanley Osinski, 24, of Boston, wanted more than anything to visit his wife, Richelle, and their son, Nathaniel, who was born March 19 as Osinski was crossing into Iraq.

He took the USAREUR program in stride.