Rehabilitation machine on its way to Texas medical center, via Landstuhl 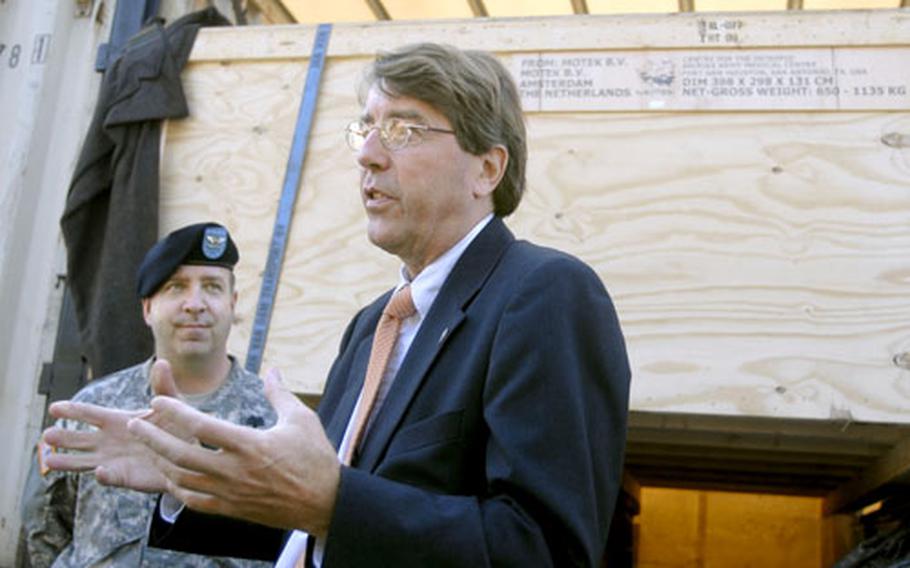 LANDSTUHL, Germany &#8212; A high-tech piece of machinery that will be used to rehabilitate wounded troops is on its way to Brooke Army Medical Center in Texas.

The Computer Assisted Rehabilitation Environments, or CAREN, made by Motek Motion Technology of Amsterdam, will be part of the Center for the Intrepid, a state-of-the-art rehabilitation facility at Brooke set to open in January. The roughly $1 million machine arrived at Landstuhl Regional Medical Center on Tuesday where it was officially received and became U.S. government property.

CAREN is a high-tech, domed machine that is used to test and improve human balance through a series of video game-like exercises. A motion platform, on which the person stands, enables manipulation of the ground while a motion capture system measures and registers the subject&#8217;s movements, according to Motek&#8217;s Web site.

The machine will be particularly helpful for patients with prosthetic legs, looking to improve balance.

&#8220;Every day, we see patients that can use this equipment come through this hospital,&#8221; said Army Col. John Collins, Landstuhl&#8217;s acting commander. &#8220;We have people right here that maybe someday will be using this. This will really help our wounded warriors.&#8221;

The machine bound for Brooke will be the first CAREN used in the military system, but Motek signed a contract about a week ago with Walter Reed Army Medical Center to place a second CAREN at the Washington, D.C., facility.