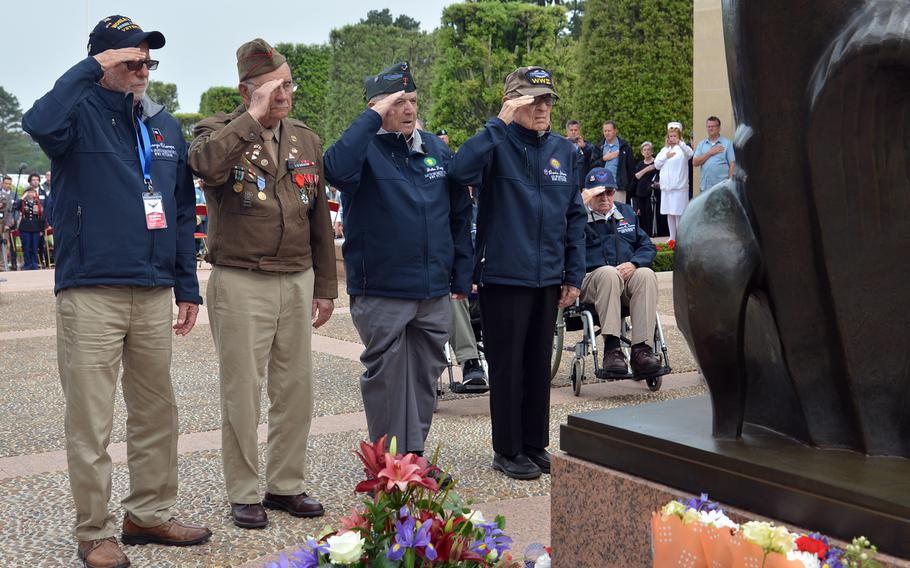 A group of World War II veterans salutes after laying a wreath at the foot of the ''Spirit of American Youth Rising from the Waves'' statue at Normandy American Cemetery at Colleville-sur-Mer, in June 2018. (MICHAEL ABRAMS/STARS AND STRIPES)

Registration is open to attend the 75th commemoration of D-Day at Normandy American Cemetery in France.

There are about 5,000 registration spots for the June 6 ceremony, according to the American Battle Monuments Commission.

Normandy American Cemetery, which sits on a cliff overlooking Omaha Beach, covers 172.5 acres and includes more than 9,300 graves. More than 1,500 Americans who were missing in action, or lost or buried at sea also are honored by name in the Garden of the Missing. Most of the Americans buried at the cemetery lost their lives in the D-Day landings and the subsequent fighting.

“Remembering the courage, sacrifice and heroism of those who fought to free Europe and ensure that tyranny did not find footing on our shores isn’t just a personal honor, it is the sacred duty of the American Battle Monuments Commission,” Matz said.