Registering newborns overseas is for more than just presents 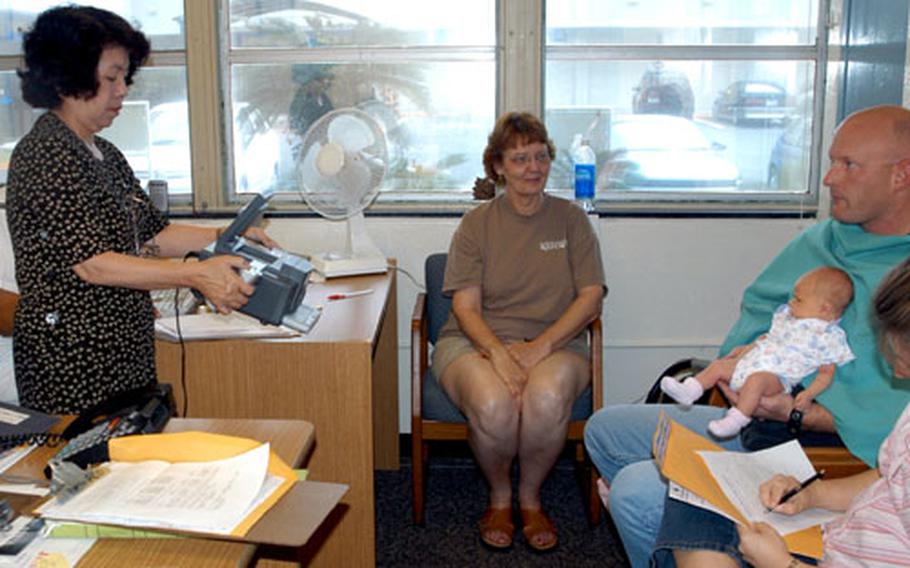 CAMP LESTER, Okinawa &#8212; With the summer&#8217;s busy moving season under way, U.S. Naval Hospital Okinawa is reminding new parents of steps they must take before traveling with a newborn.

Before a child born on Okinawa to at least one U.S. parent can travel off the island, the child must be registered as a U.S. citizen and have a passport, according to Keith Williams, a supervisor at the hospital&#8217;s Patient Administration Department.

Williams said the first step in getting a baby registered is picking up a birth registration packet at the hospital&#8217;s maternity ward.

The packet lists requirements to register children and sources to obtain needed documents, he said.

Proof of parents U.S. citizenship, which can be a passport, birth certificate, naturalization certificate or certificate of U.S. citizenship.A marriage certificate, which if issued in a foreign language must have an English translation.Divorce or annulment decrees if applicable.The baby&#8217;s passport photo, which can be taken at the hospital&#8217;s Birth Registration office.Two money orders also are needed for fees &#8212; one for $65 to cover the Consular Report of Birth Abroad, and another for $82 to pay the passport fee. Williams said a no-fee passport can be issued if a DD Form 1056 is brought in from the individual&#8217;s personnel office.

All official documents from the parents must be original, meaning they must have a raised seal of the official government office of record.

Filing the birth registration and passport should be done as soon as the baby is born, Williams said.

&#8220;A major problem is when they come in a month before they are about to PCS, or in some cases they receive a Red Cross message to leave tomorrow and they have not completed, or even started, their package yet,&#8221; he said. &#8220;The Consulate is accommodating to a certain degree, but will not make PCSing grounds for doing an emergency passport.&#8221;

Williams said he has seen parents get extended on Okinawa because the paperwork was not done in time for them to move back to the States.

Among &#8220;show stoppers,&#8221; Williams said, are not having the right documents, no money orders, not having the no-fee passport form &#8212; if needed &#8212; and not having both parents present at the photo/oath appointment. He added that a special power of attorney can be given to complete the process if one or both parents are deployed.

The completed package is sent to the local U.S. Consulate or Embassy. Kaoru Agena, who registers births at the consulate on Okinawa, said her office in Naha receives more than 100 packages each month. She said it typically takes about a month to return the Consular Report of Birth Abroad paperwork and passport to the parents.

Agena said the consulate is very strict about issuing emergency passports and examines each request to see if it&#8217;s more a case of poor planning. They are usually reserved for dire situations or Red Cross emergency messages.