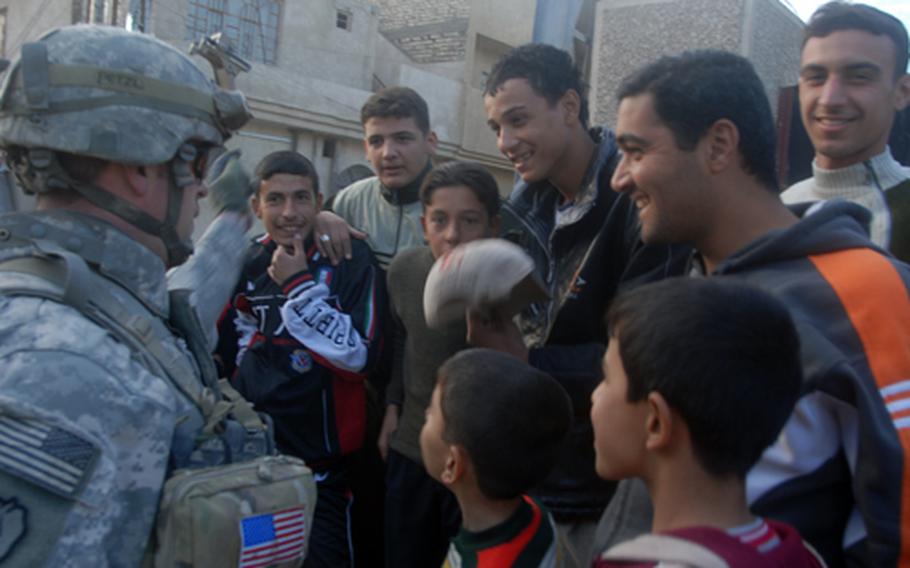 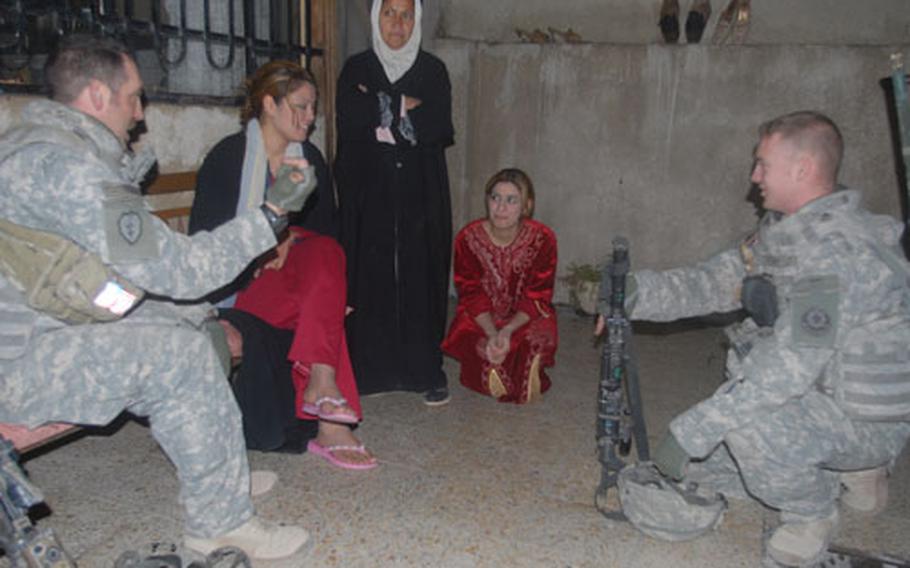 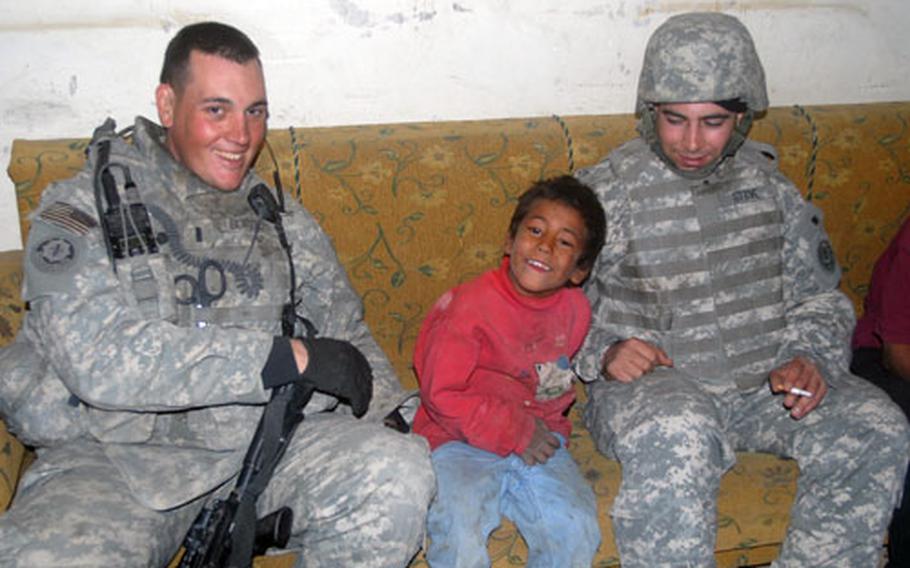 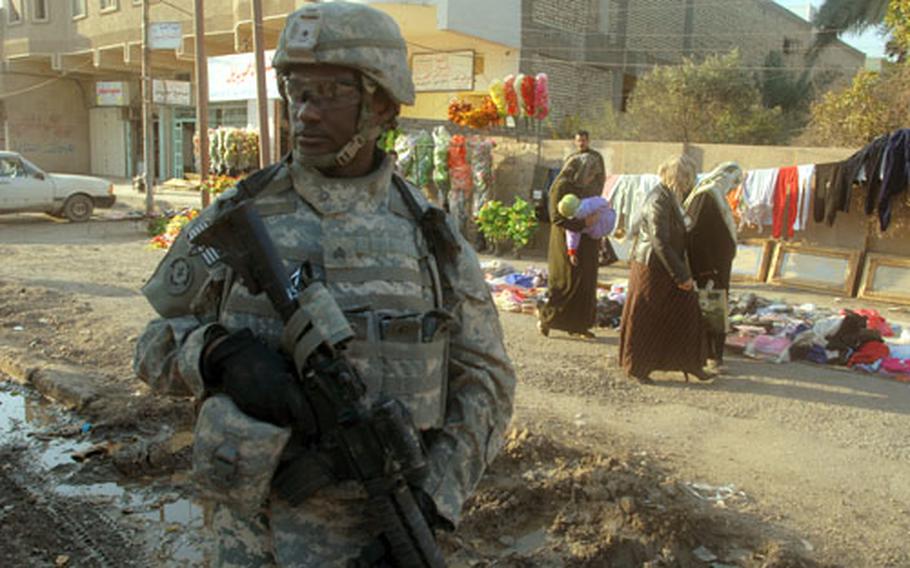 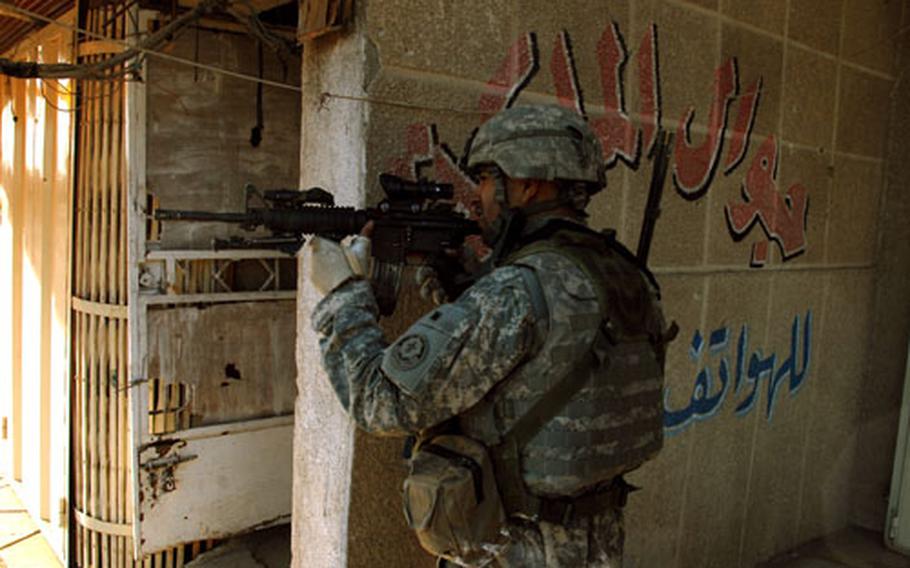 BAGHDAD &#8212; Less than three months after they arrived, soldiers from 3rd Squadron, 2nd Cavalry (Stryker) Regiment said goodbye Tuesday to dozens of Iraqi friends on the streets of southern Baghdad.

The unit, which is needed elsewhere in Iraq, fought bloody battles to free the Hadar neighborhood of insurgents who terrorized locals and used the area as a base for attacks in the Iraqi capital.

The 4th Platoon, Company H leader, 1st Lt. Jonathan Borders, 25, of Kailua, Hawaii, visited several families that his unit had special relationships with, reassuring them that Strykers from 2nd Squadron, 2nd Cavalry will continue to patrol their streets.

In one poverty-stricken household, a single father cared for four sons and a daughter while eking out a living as a generator repairman in the local market.

The 4th Platoon soldiers stepped in when a bully was taunting one of the children, who has a hunchback. They soon found out that the family was short of food and money, so the young soldiers chipped in $100 to buy the kids their first new clothes in a year, Borders said.

Later, they persuaded a baker to take on the oldest son as a courier, a job that comes with free bread as part of the salary. They&#8217;re trying to get the father a job with the Iraqi Security Volunteers &#8212; armed neighborhood guards credited with reducing violence in many parts of Iraq.

&#8220;When we first came here, some people resented us,&#8221; Borders recalled. &#8220;Operations were a part of it. We got in firefights. We&#8217;d get shot at and shoot back. But people appreciate the fact that we were up front with them and made an effort to visit their houses, take photos of any damage (caused by the fighting) and pay for it,&#8221; he said.

The soldiers visited the pregnant wife of an al-Qaida sniper detained several months ago.

The platoon brought the woman food and clean water and asked a neighbor to help her around the house and take her to the hospital for check-ups.

An Iraqi doctor living in Hadar said he&#8217;s glad al-Qaida is gone. The terrorists used to steal fuel from his generator, he said.

&#8220;The first time I realized the neighborhood had changed for the better was when people were inviting us to their houses for lunch,&#8221; Borders said.

In the market area, the soldiers stopped and said goodbye to the shopkeepers.

&#8220;You see the people in the market painting, putting in new doors and fixing up the shops. We tell them: &#8216;We are here to provide security and make sure you can start living your lives without someone shooting you because they don&#8217;t like you for religious reasons,&#8217; &#8221; Vik said.

In another street, Staff Sgt. John Christopher Mills Jr. of Petaluma, Calif., said goodbye to a group of local teenagers hanging out on the corner. One showed off a hat that said: &#8220;MSR Irish,&#8221; the Army&#8217;s name for a local road, and everyone laughed.

&#8220;They are just the kids in the neighborhood. We&#8217;ve been in all their houses,&#8221; Borders said, adding that the platoon started building a soccer field nearby on land that insurgents used to use to park cars and plan operations.

In another house, a pair of teenage sisters looked close to tears when they heard the soldiers were leaving.

&#8220;Tell them we are the best Stryker unit in Iraq and the Army needs us to go fight al-Qaida somewhere else,&#8221; Mills said to his interpreter.

&#8220;It was sad for us to leave them,&#8221; he said afterward. &#8220;We helped out that whole neighborhood and that family, we really had a liking for. There were several families like that. They were the people who helped fix their neighborhood.&#8221;