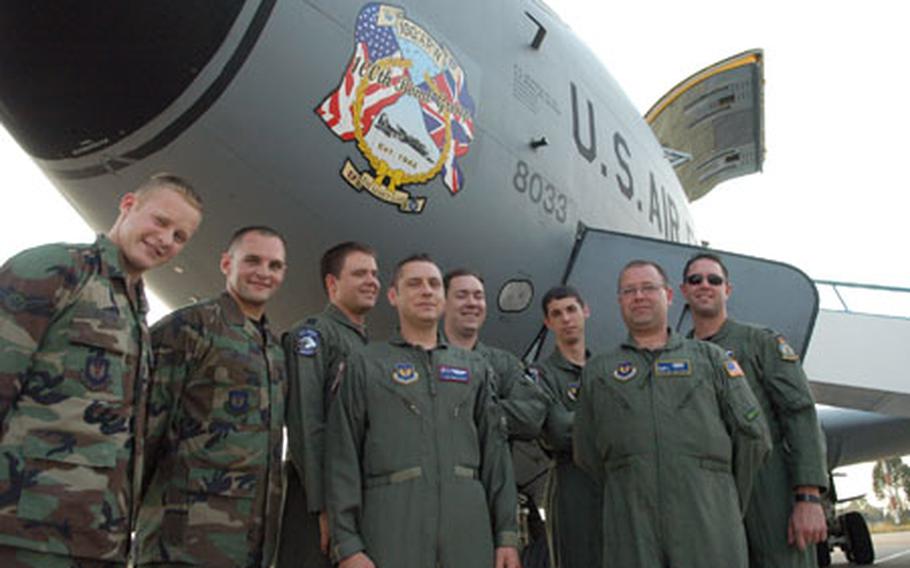 Since the onset of the wars in Iraq and Afghanistan, 100th Air Refueling Wing crews like this one out of RAF Mildenhall, England, have seen a rise in missions where they&#39;re not refueling other aircraft thousands of feet in the air. Last week, this crew transported troops, cargo and blood to Kosovo and Romania over three days. They are, from left: Airman 1st Class Brett Nelson, Airman 1st Class Lucas Kaltur, Capt. Cameron Donough, Tech Sgt. Mike Soper, Capt. Chad Erickson, Senior Airman Mike Miranda, Staff Sgt. William Smith and Capt. Lewis DeMasso. (Geoff Ziezulewicz / S&S)

Since the onset of the wars in Iraq and Afghanistan, 100th Air Refueling Wing crews like this one out of RAF Mildenhall, England, have seen a rise in missions where they&#39;re not refueling other aircraft thousands of feet in the air. Last week, this crew transported troops, cargo and blood to Kosovo and Romania over three days. They are, from left: Airman 1st Class Brett Nelson, Airman 1st Class Lucas Kaltur, Capt. Cameron Donough, Tech Sgt. Mike Soper, Capt. Chad Erickson, Senior Airman Mike Miranda, Staff Sgt. William Smith and Capt. Lewis DeMasso. (Geoff Ziezulewicz / S&S) 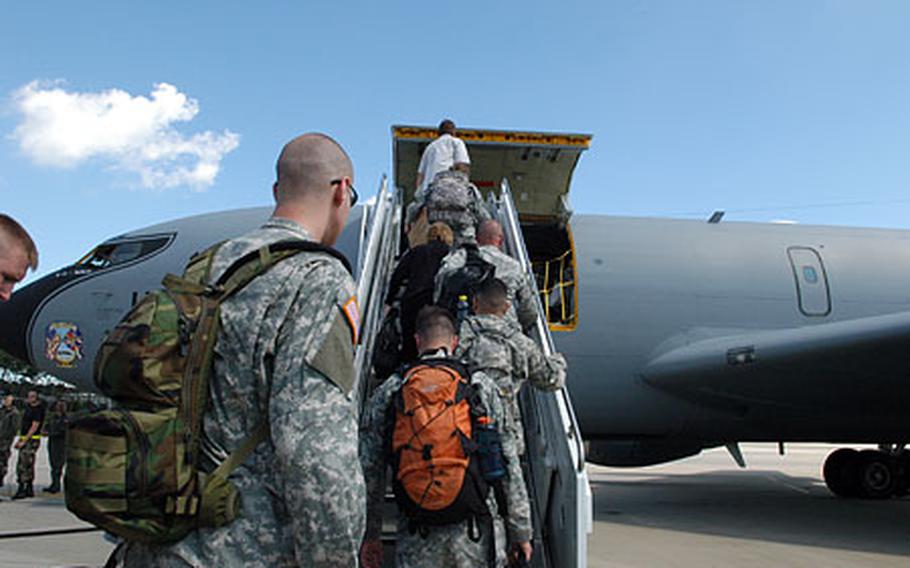 Some soldiers didn&#39;t make the trip to Romania last week in the belly of the mammoth C-130, the workhorse of today&#39;s military. About 40 rode in a KC-135 out of RAF Mildenhall, England. (Geoff Ziezulewicz / S&S) 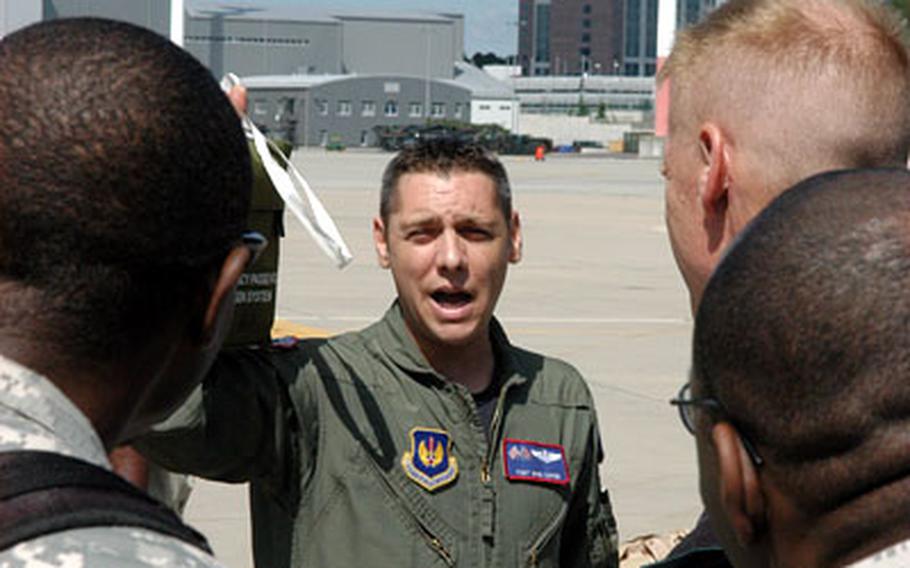 Air Force Tech Sgt. Mike Soper briefs soldiers before they board his KC-135 last week at Ramstein Air Base in Germany. The soldiers were being taken to Romania. (Geoff Ziezulewicz / S&S) 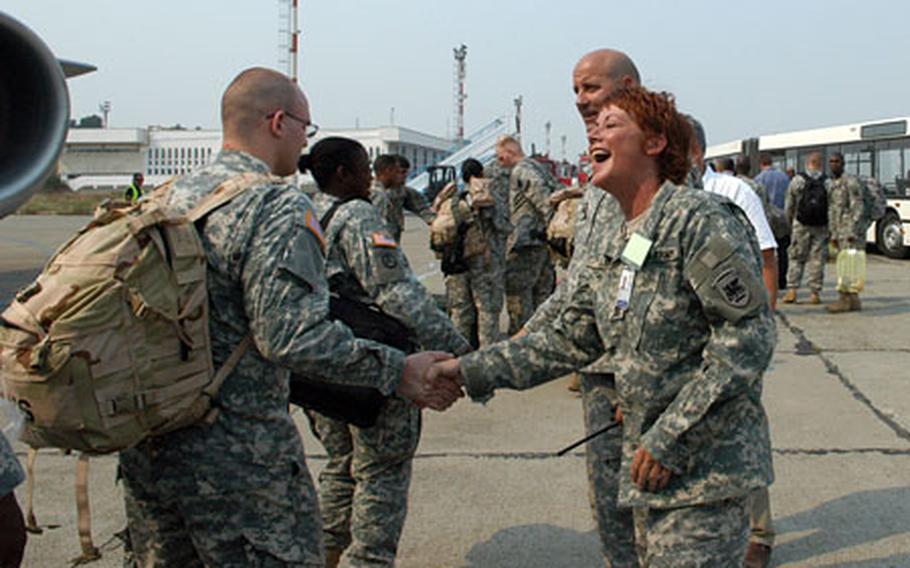 Army Sgt. Maj. Karen Kelly, right foreground, and Joint Task Force-East commander Col. Peri Anest welcome soldiers arriving at Romania&#39;s Mihail Kogalniceanu Air Base on Wednesday. The soldiers are part of a contingent that is laying the logistical groundwork for exercises in the coming months. Eventually, Romanian bases will host rotations for brigade exercises. The operation is being run by the Southern European Task Force, out of Vicenza, Italy. (Geoff Ziezulewicz / S&S)

RAF MILDENHALL, England &#8212; The hold of a KC-135 gets hot on the ground in the summer, regardless of what the flight crew is actually doing with the bird.

Add 40-odd soldiers, as an 100th Air Refueling Wing crew did last week on a troop transport flight to Romania, and things get that much hotter. Space gets tighter, too, as soldiers plop down in netting seats with massive cargo boxes in front of them.

Army Sgt. Daniel Emanuel of U.S. Army Garrison Mannheim in Germany didn&#8217;t seem to mind. The plane beat the hulking and oft-used C-130 that he is used to.

Regardless of comfort, non-air-refueling missions have become a more significant part of life for the 100th, the lone air refueling unit for U.S. Air Forces in Europe.

Normally, guys like Miranda are up high, lowering booms to other aircraft for an in-flight gas up. But when needed, crewmembers also are finding themselves transporting troops, cargo and other supplies.

Last week during a three-day mission, Donough&#8217;s team transported a total of 86 passengers to and from Kosovo and Romania, while also delivering more than 5,000 pounds of cargo and a couple of gallons of blood.

The nonrefueling flights for KC-135 crews seem to be a combination of wartime needs and the general up-tempo missions of the C-130, the airborne workhouse of today&#8217;s military.

The number of nontraditional missions has soared since the beginning of the wars in Iraq and Afghanistan. About 70 flight hours were logged for nonrefueling duties in fiscal 2003, according to the 100th Operational Support Squadron at RAF Mildenhall, where the wing is based.

That number rose to about 143 hours in the air for fiscal 2004, and soared to approximately 577 flight hours in fiscal 2005. It dipped to about 412 in fiscal 2006, and so far this fiscal year, which began in October, there have been about 130 such missions.

There are about 240 or so flights a month out of Mildenhall, said Capt. Lewis DeMasso, another pilot on last week&#8217;s mission.

Like any military duty, such missions have their ups and downs, the crew said.

There&#8217;s also all the coordination with non-Air Force entities outside the crew that has to be dealt with, something that isn&#8217;t a factor when the crew is refueling an F-15 over the U.K.

The organized confusion of so many moving parts was apparent during last week&#8217;s trip. The soldier transport flight from Ramstein Air Base in Germany to Romania on Wednesday was delayed taking off from both countries.

The air crew spent a few unwanted hours at the Milhail Kogalniceanu Air Base in Romania because of bureaucratic confusion regarding when they were allowed to take off.

&#8220;Those delays in the back end of the aircraft delay our mission,&#8221; DaMasso said, referring to problems that can occur when working with the other entities.

When they finally got the go-ahead to fly back to Mildenhall after the three-day mission, DeMasso said it&#8217;s all about crew coordination, regardless of the heat or cramped spaces.

And some things remain constant in the plane&#8217;s hold for the crews, regardless of the mission.

Airdrops are part of training in Romania

About 130 airmen and a pair of C-130E Hercules cargo aircraft participated in the training, said Petra Day, an Air Force spokeswoman at Ramstein Air Base. The training wrapped up on Thursday, with most of the wing expected to return to Germany in the next several days.

The exercise allowed pilots and crewmembers to perform aerial missions they typically cannot do in Germany because of stricter rules on flying.

The airmen airdropped cargo, performed missions with night-vision goggles and loaded and unloaded cargo in much the same way they would in combat.

U.S. Air Forces in Europe have stepped up training in Eastern Europe. Wing members from Ramstein took part in similar training in Bulgaria last March. England-based 100th Air Refueling Wing and the 48th Fighter Wing deployed to Romania for training in May.

The 86th consists of four groups, 14 squadrons and one detachment. Its primary mission is to conduct airlift, airdrop and aeromedical evacuation operations, according to Ramstein Air Base&#8217;s Web site.