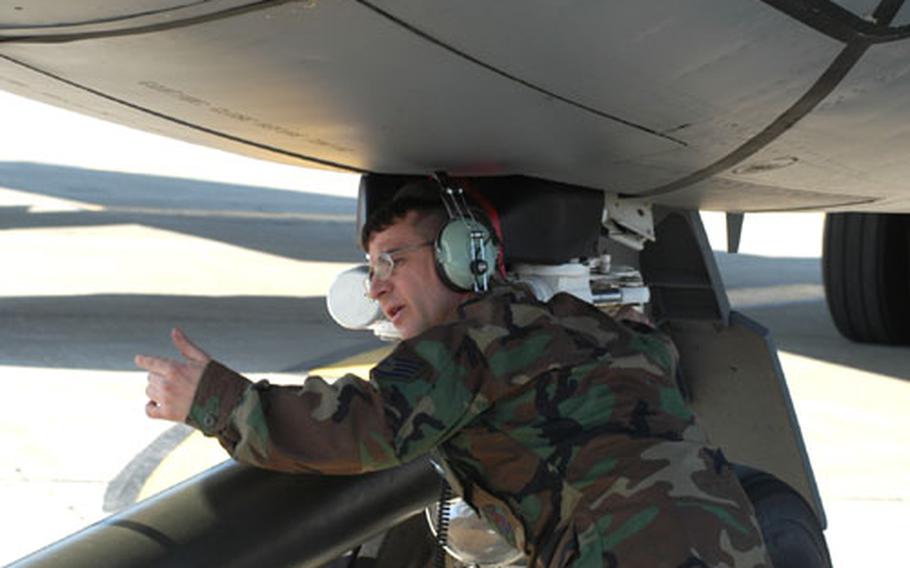 Staff Sgt. Steven Lopez of the 100th Aircraft Maintenance Squadron from RAF Mildenhall, Germany, prepares a KC-135 to be pushed into place Friday at a deployed location in the Mediterranean. (Ron Jensen / S&S)

Staff Sgt. Steven Lopez of the 100th Aircraft Maintenance Squadron from RAF Mildenhall, Germany, prepares a KC-135 to be pushed into place Friday at a deployed location in the Mediterranean. (Ron Jensen / S&S) 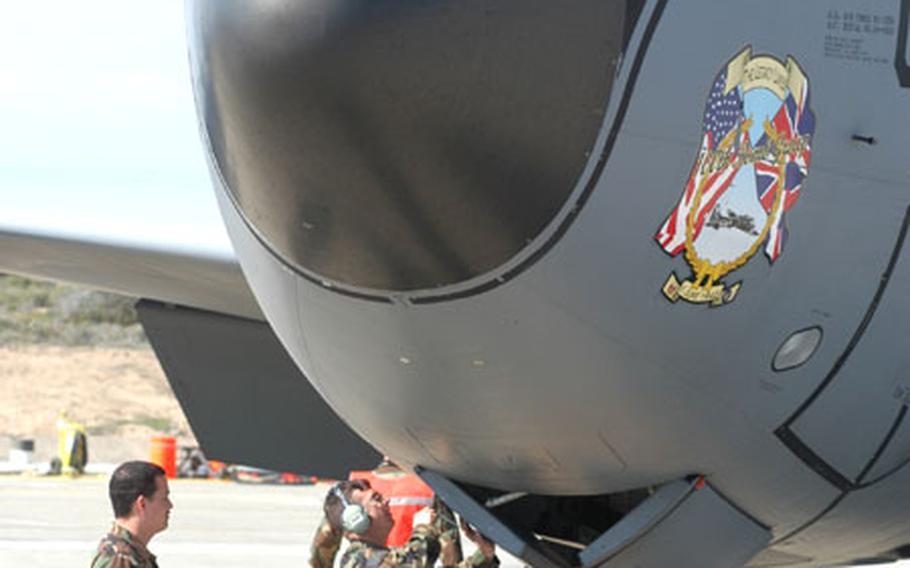 Maintainers from the 100th Air Refueling Wing at RAF Mildenhall, England, prepare to move a KC-135 into place at a deployed location in the Mediterranean region. (Ron Jensen / S&S)

AN AIR BASE IN THE MEDITERRANEAN REGION &#8212; The Air Force&#8217;s only air refueling wing stationed in Europe has joined the military buildup that could wage war with Iraq.

The 100th Air Refueling Wing has sent several KC-135 Stratotanker aircraft and more than 200 people to a base in the Mediterranean region. Because of internal political sensitivities in the host country, the specific location cannot currently be named.

&#8220;We&#8217;ve deployed in support of Operation Enduring Freedom and the continuing war on terror,&#8221; said Col. Mike Crane, the vice wing commander who is now the commander of the 100th Expeditionary Operations Group.

He said the troops and aircraft will follow &#8220;whatever the instructions from our commanders and the president happen to be.&#8221;

They have joined the 401st Air Expeditionary Wing made up of Air Force personnel from across the globe. Col. Terry New, the 401st AEW commander, said the wing will eventually include more than 1,000 people, but now has about half that number.

Crane said additional aircraft will soon arrive, but will probably not be from the 100th ARW, which traces its heritage back to the 100th Bomb Group, known as the Bloody 100th for its success at tough bombing missions during World War II.

He said the package that came was specifically tailored for the location. Some people from the wing came months ago to look the place over.

Since arriving, the aircraft have been providing in-flight refueling for Navy aircraft flying from a carrier group in the Mediterranean. The personnel are on orders for 179 days.

The base is no hard-scrabble location. It has buildings and a support structure that makes day-to-day living fairly comfortable. Dining facilities already exist on the base, and the Americans are welcome to use them.

Despite that, there have been questions to answer, everything from where to get toilet paper to whether the aircraft could taxi on the runway.

New said the effort to put together the 401st began last autumn and the location was already chosen. Despite the disparate locations from which the members come, New said it is not hard to get everyone working together.

Plus, he said, people want to participate in an important effort.

But, he said, there is satisfaction in being called up when that mission has to be performed.

It&#8217;s good to be a part of something important, he explained, but he hopes the world can somehow avert a war.

For some members of the 100th ARW, the deployment is a change of pace.

Senior Airman Demetrius Alexander, a resource management specialist, is on his first deployment.

Staff Sgt. Kevin Tucker, a finance specialist, was given only 90 minutes to prepare for his deployment.