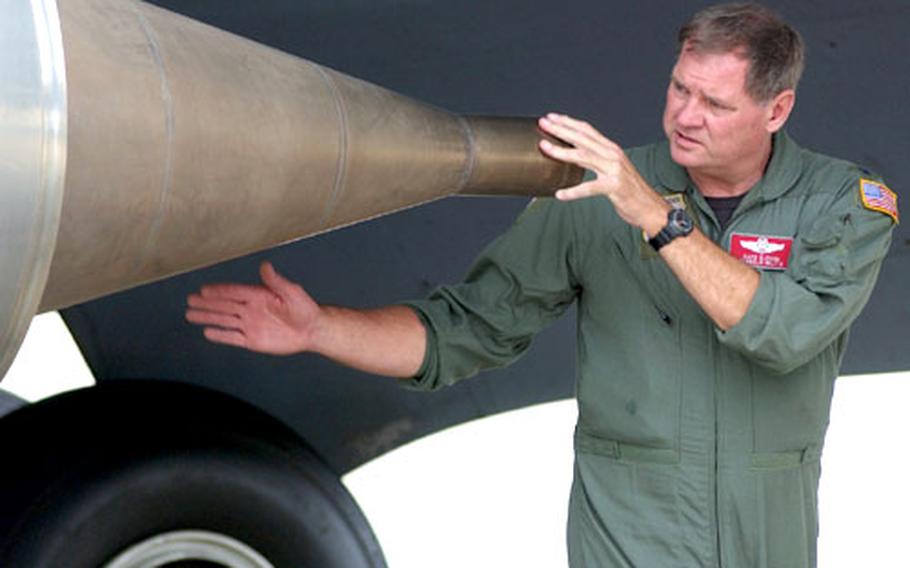 Lt. Col David Glisson, aircraft commander, inspects the engine exhaust on a KC-135 prior to a refueling mission at Rhein-Main Air Base, Germany, on Tuesday. Glisson is from the 186th Air Refueling Wing, Meridian, Mississippi. (Raymond T. Conway / S&S)

Lt. Col David Glisson, aircraft commander, inspects the engine exhaust on a KC-135 prior to a refueling mission at Rhein-Main Air Base, Germany, on Tuesday. Glisson is from the 186th Air Refueling Wing, Meridian, Mississippi. (Raymond T. Conway / S&S) 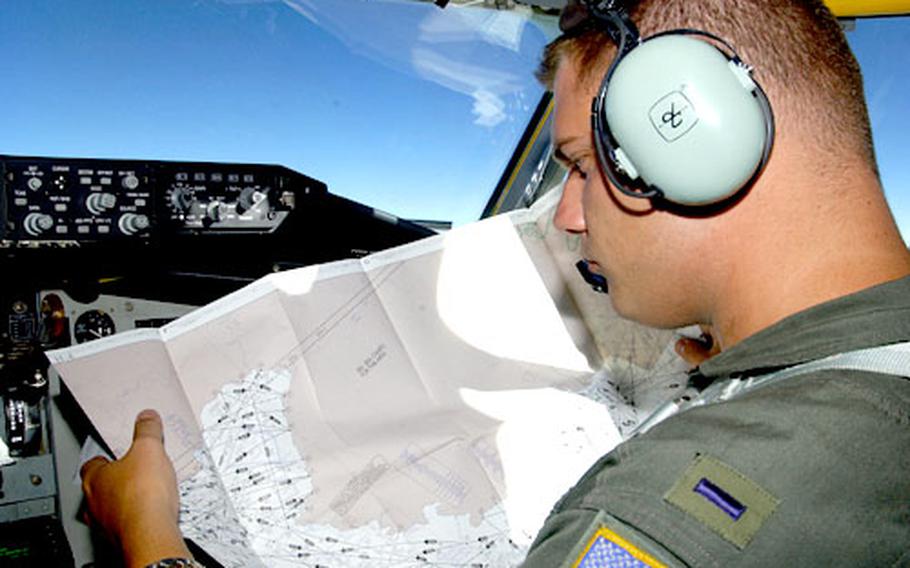 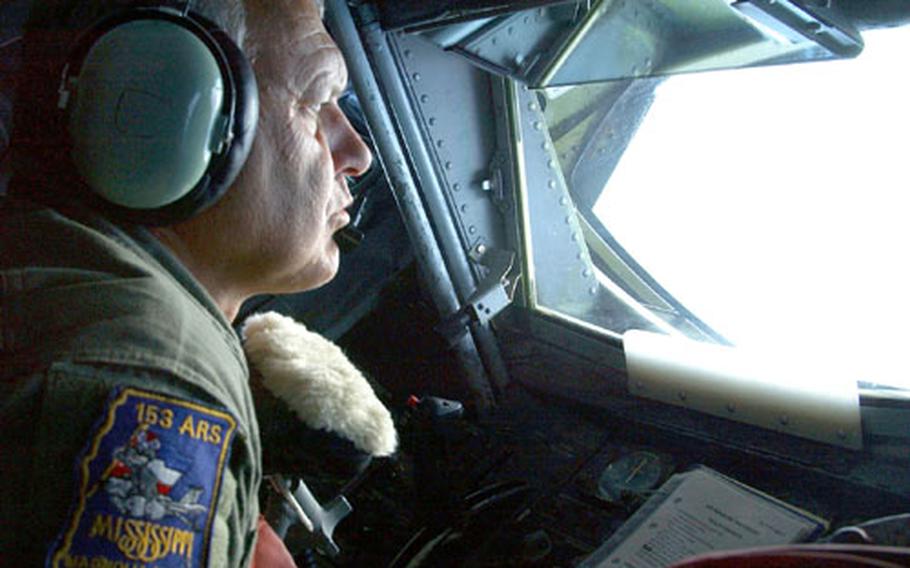 Air Force Master Sgt. Glenn Hancock lines up the boom with a C-17 during refueling Tuesday over the Black Sea. (Lisa Horn / S&S) 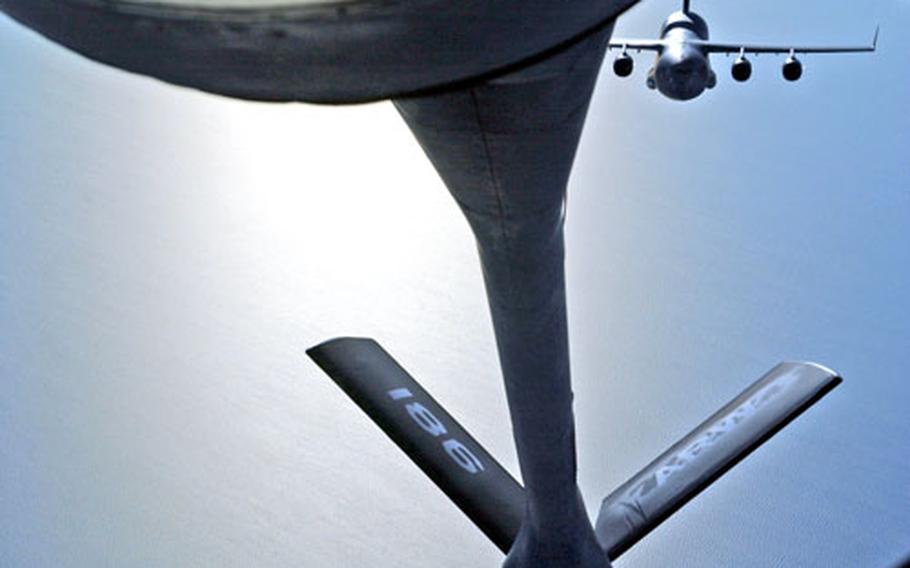 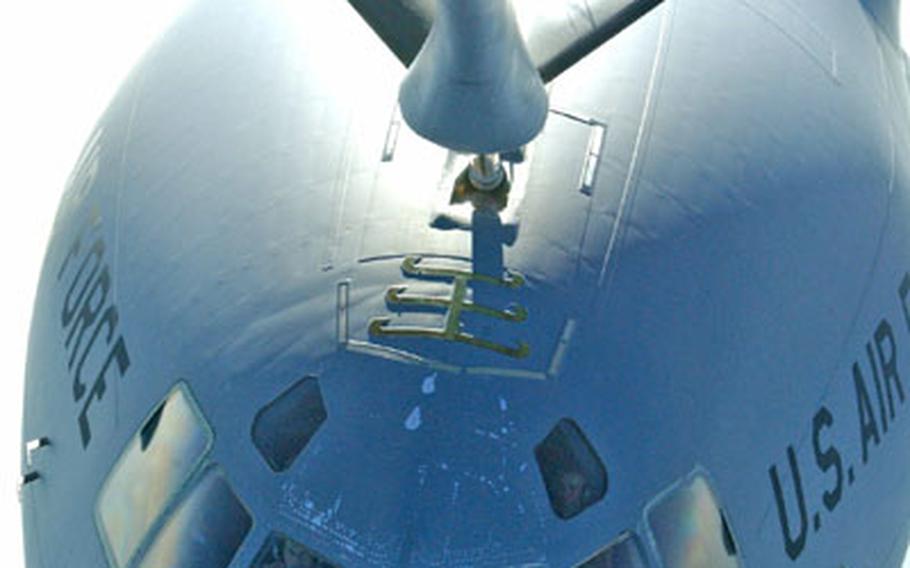 The Air National Guard unit &#8212; part of the 385th Air Expeditionary Group &#8212; is staging its refueling missions from Rhein-Main Air Base until the end of the month while the runway at Incirlik Air Base, Turkey, is closed for repairs.

&#8220;[The receivers] need the gas to be able to minimize their time on the ground at their stops,&#8221; Mobley explained.

Glisson, Garrison, McCarra and Hancock took off Tuesday from Rhein-Main to meet up with a C-17 on its way to Balad Air Base, Iraq.

Capts. Lance Spear and Eduardo Emmanuelli, pilots of the C-17, had taken off from Rhein-Main shortly before the KC-135. Two and a half hours later, the aircraft rendezvoused over the Black Sea, just off the coast of Turkey.

During the mission, Glisson and Garrison stayed in constant contact with Spear and Emmanuelli to ensure both planes were able to meet at the predetermined refueling time.

Lying on his stomach in a small pit at the plane&#8217;s tail, Hancock had his hands at the controls. As he lowered the boom to a point just above the C-17 cockpit, he filled the plane with 65,000 pounds of fuel, or roughly 9,700 gallons.

The 11 minutes of refueling went flawlessly. As the C-17 pulled away to continue its flight into Iraq, Hancock waved to the crewmembers and they disappeared into the horizon.

Flying directly into the setting sun, the KC-135 turned to head back to Germany. Glisson and Garrison attached Post-it notes to the windshield to deflect some of the sun&#8217;s glare.

Before Incirlik&#8217;s repairs began, a similar refueling mission would take three hours, or about half the time it took on this day. In addition to adapting to the longer flight time, pilots have also had to adjust to maneuvering in and out of Frankfurt&#8217;s busy airspace.

Glisson had to fight to break into the Frankfurt radio chatter as an air traffic controller provided instructions to the endless number of incoming and outgoing aircraft.

&#8220;The three big challenges [flying from Rhein-Main] are getting out of Frankfurt, the timing of the refueling itself and finally getting back to Rhein-Main and landing,&#8221; Mobley said.