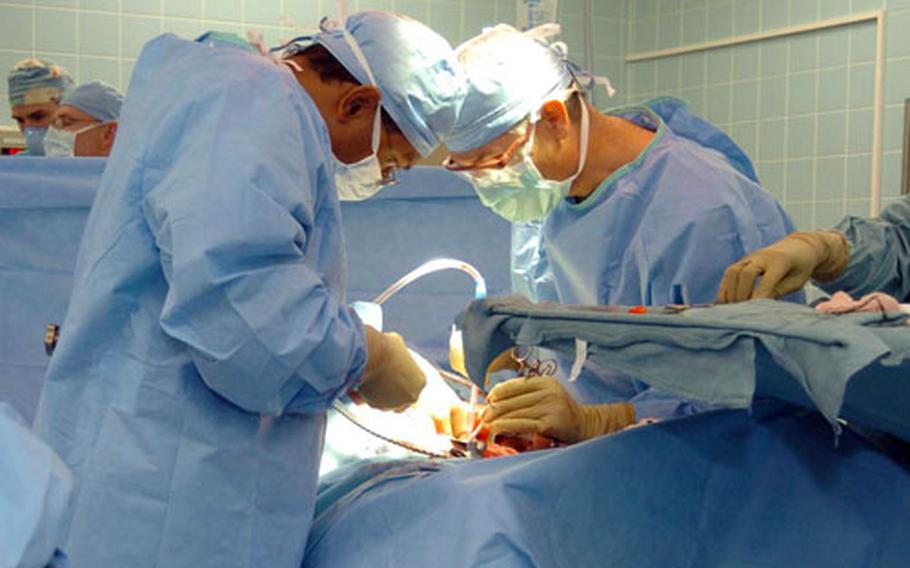 Landstuhl Regional Medical Center doctors perform surgery on a wounded servicemember. Today, the mortality rate among wounded troops is half of what it was during the Vietnam War. (Todd Goodman / Courtesy of U.S. Army)

LANDSTUHL, Germany &#8212; The number of troops dying as a result of battlefield injuries in the Iraq war is half of what it was during the Vietnam War, critical care and trauma surgery experts at Landstuhl Regional Medical Center say.

Medically speaking, today&#8217;s mortality rate among wounded troops is 50 percent less than it was roughly 35 years ago.

The lower mortality rate among today&#8217;s wounded troops has been achieved not so much by innovations but rather refinements to U.S. military medical care, doctors said.

Those refinements have saved thousands of lives since the beginning of the wars in Iraq and Afghanistan.

&#8220;They had huge numbers of patients and managed all those guys with perfect damage-control principles,&#8221; he said. &#8220;By doing that, for their Marines, I think they had a zero-mortality rate in theater.&#8221;

In damage-control surgery, surgeons treat only a patient&#8217;s most critical problems and get that patient out of surgery so he or she can receive additional treatment at a medical facility with more assets.

&#8220;We&#8217;re operating on patients and getting them out of the operating room before they develop a physiologic crisis,&#8221; Dorlac said. &#8220;If we operated in the old mode of surgery &#8212; this is even 15 years ago &#8212; you would start the case and operate until you finished the case. And if the guy died, the guy died, but you didn&#8217;t walk out of the operating room until you had done basically everything. Now we just go in and stop the hemorrhage. We stop the contamination. We leave the abdomen open. We cover it with a piece of plastic, and we get the guy out.&#8221;

Specific surgical procedures being used on wounded troops are refinements of tried-and-true techniques. Instead of making two incisions to relieve pressure inside limbs damaged by roadside bomb blasts, surgeons at Landstuhl are making four cuts to the limbs. Landstuhl surgeons also will open patients&#8217; abdomens sooner than they would have in the past. Surgeons cut open the abdomen to release internal pressure, promote blood flow and allow internal organs to swell.

Once swelling subsides, doctors at Landstuhl or even in the States can close the patients&#8217; abdomens.

Only in the past few years have doctors been able to determine when it&#8217;s best to close wounds that have been left open to prevent infection.

The use of external fixators offers doctors a way to stabilize fractures without covering open wounds subject to swelling. Among their benefits, external fixators help bone and soft tissue heal, and the devices also allow open fractures to be treated.

Until very recently, the military lacked a formal trauma system that linked what doctors were doing to patients across its continuum of care &#8212; from downrange to Landstuhl and on to Walter Reed Army Medical Center in Washington, D.C.

Now that the system is in place, doctors have made wide-ranging policies that have been able to prevent fatal problems such as pulmonary embolisms. At one time, pulmonary embolism &#8212; basically, a blood clot in the lungs &#8212; was the top preventable mortality at Landstuhl.

With concurrent process improvement, military medical providers have been able to examine data and make treatment changes just weeks later &#8212; something that has never been done in prior U.S. conflicts.