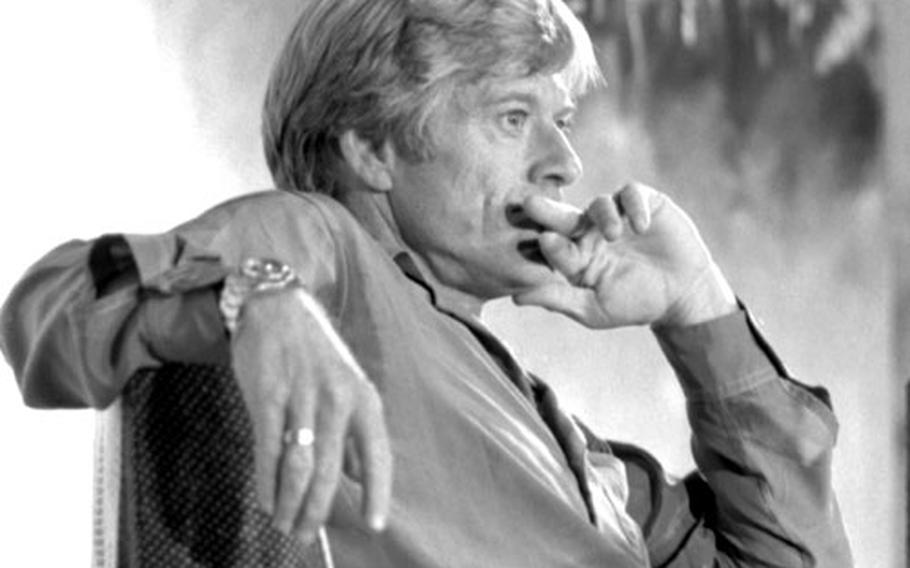 Buy Photo
Robert Redford meets the press in Tokyo during an August, 1984 tour to promote his latest film, "The Natural." (Liz Schading/Stars and Stripes)

Film superstar Robert Redford says he plans to fade to black as an actor and become the unseen man behind the camera.

"I think that it's just in the natural evolution of things that I would not act all of my life," said Redford, who was in Tokyo to promote the Japanese opening of his latest film, "The Natural."

In his first directorial debut, Redford won the 1981 Best Director Oscar for "Ordinary People," a drama about a family torn apart by the tragic loss of a son.

"I will continue to act for awhile because I get enjoyment out of acting," Redford said. "But I do like directing and I want to move more toward that and away from acting."

As an actor, Redford added, he has only his own interpretation of a screen role, but as a director, he would control both the performer and the performance.

Redford paused and said, "Besides, I'm not getting any younger."

"The Natural," a Columbia film adapted from Bernard Malamud's novel, tells the story of an aging drifter who was a Big League pitching prospect in his youth, but lost his big chance through a near-fatal meeting with a mysterious woman. He tries to recover his dream with a desperate, end-of-the-trail comeback.

The movie climaxes with an inspirational home run &mdash; at sharp odds with the depressing finish in Malamud's book. Redford defends that.

"That was intentional," he shrugged. "Films are not a literary medium. Very often, people don't understand that ... In this case, I don't think the book &mdash;which is very good on its own level &mdash; would be acceptable (as a film) to audiences because it would be too depressing. And in the world today, or at least in my country, there's enough to be depressed about. So we're looking for a little hope."

Besides, all during the filming, Redford had that ebullient, home-run-rally-at-the-bottom-of-the-ninth feeling &mdash; recapturing his sandlot youth in Santa Monica, Calif.

A sports-loving father made him a proficient hand at the national pastime, good enough to earn a baseball scholarship to the University of Colorado.

"And so this project had great appeal to me from that standpoint. It seemed to me a way to put on the screen something that was a great part of my own life."

His favorite player had been Ted Williams, whose never-sullied Red Sox jersey had been Number 9, the number Redford wears in the film.

"In `The Natural,' the idea was `can one have a second chance?' When one is born with a great talent, what are the conditions that surround that talent that enable you to either gain your dream or lose it? What do you do if you have a great gift but you don't have knowledge, you don't have wisdom &mdash; you just have innocence and there's life out ahead of you? And considering the fact that life is extremely unpredictable, what is the struggle and what is to be learned in the struggle?"

And so it was for Redford in the filming of the upbeat reprise, when Redford waved off director Barry Levenson's instructions and refused the bland taste of faking an illusion to smash the climactic homer.

With 25,000 extras crowding a stadium in Buffalo, New York, Redford pulled superstar seniority when he heard:

"Look, just do the best you can. You know, just start to take a swing at the ball and we'll cut and we'll get a shot of you hitting something, then we'll show the ball going over the fence."

"No, before I die, put three cameras on this one shot and put one behind me and in case I hit it, we'll see the whole thing."

Redford could have been the hard-pressed hero of an epic poem, Casey with two strikes and three men on &mdash; sharply conscious of the fact that there were 27 years between this moment and the last time he had played.

It all came back to Redford in that golden moment the ball soared away.

But the director still had to save the scene with patched-in illusion.

"I was so excited about actually hitting that home run on that pitch, I forgot to run ... "