An airman assumes firing position outside his vehicle during convoy training Friday at Osan Air Base. The Air Force’s 554th Red Horse Squadron trained about 100 airmen how to respond in various types of attacks on their convoys. (Franklin Fisher / S&S)

An airman assumes firing position outside his vehicle during convoy training Friday at Osan Air Base. The Air Force’s 554th Red Horse Squadron trained about 100 airmen how to respond in various types of attacks on their convoys. (Franklin Fisher / S&S) An airman rushes into position to meet an attack on his convoy during a mock battle drill. (Franklin FIsher / S&S) 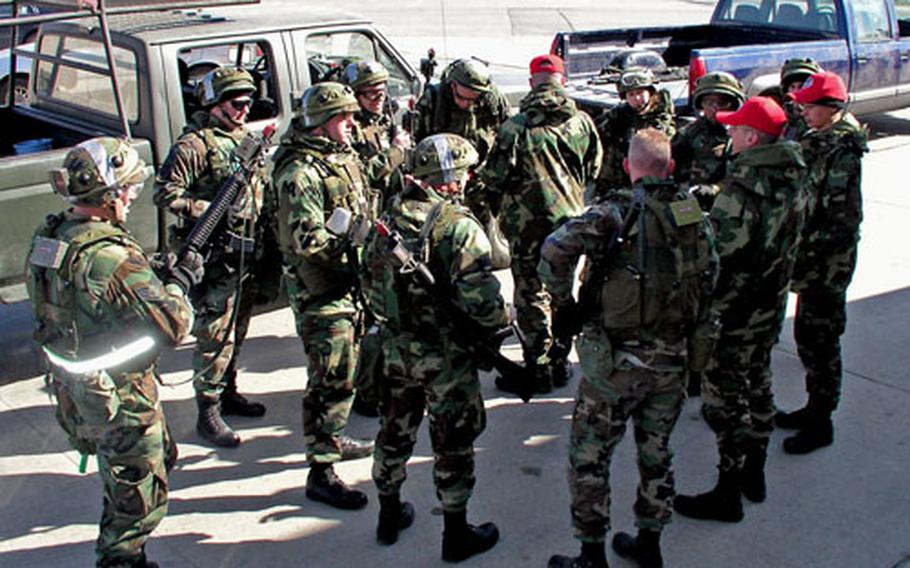 OSAN AIR BASE, South Korea &#8212; The airmen in the convoy had little doubt the man sprinting toward their vehicles Friday morning was an insurgent who meant the American infidels harm. Wild-eyed, arms flailing as he ran, he kept screaming something they couldn&#8217;t understand.

Within seconds he&#8217;d reached a Humvee and lunged waist-deep into an open window.

&#8220;You&#8217;re all dead!&#8221; he announced in English, adding with what suddenly was a very American smile, that he was meant to be a suicide bomber wearing a vest packed with explosives.

The venue was not Iraq but Osan Air Base in South Korea, and the man was not an insurgent suicide bomber but a member of the Air Force&#8217;s 554th Red Horse Squadron taking part in live-fire convoy training.

Red Horse units, which build airfields and buildings and do other construction for the Air Force, are comparable to the Navy construction battalions known as Seabees.

About 100 airmen took the training Thursday and Friday among the buildings, lots and work yards of the squadron compound. It taught them what to do if their convoy encounters protesters, homemade roadside bombs, an ambush, sniper fire, rocket-propelled grenade attacks and other threats.

Being convoy-savvy is especially important for Red Horse airmen, who typically travel overland to carry out their mission.

The airmen also were shown photos during instruction that drew on &#8220;lessons learned&#8221; from U.S. military convoys in Iraq.

The mock battle drill itself entailed six situations: how to identify improvised explosive devices while taking small arms fire; identifying a bomb planted in a vehicle; how, while under fire, to get airmen to safety who&#8217;ve been wounded in an attack on the convoy; what to do when they encounter roadside protesters; how to dismount and lay down a base of fire when attacked; and how to handle a complex ambush, Kuper said.

Hargrave, who has served in Iraq, thinks this week&#8217;s training can help her if she deploys there again.