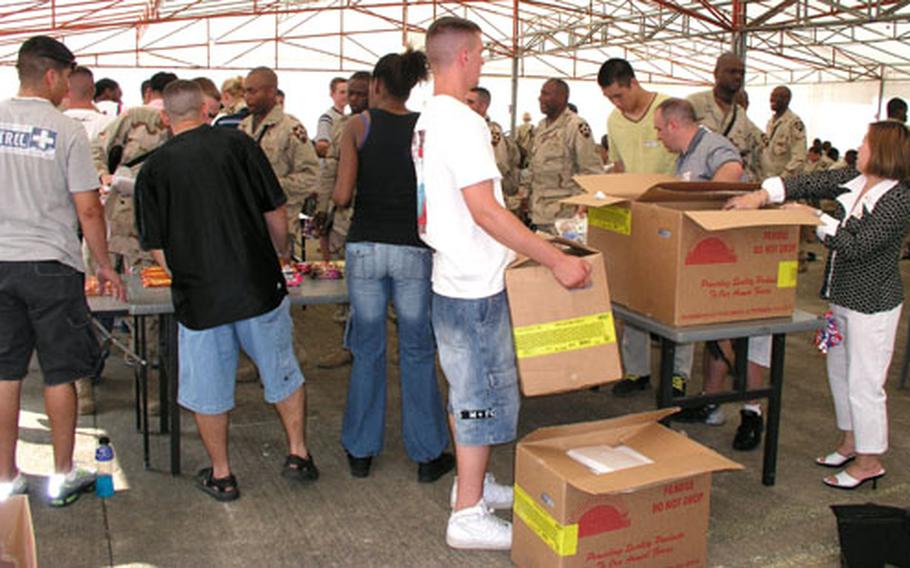 Volunteers at Osan Air Base help the staff at a Red Cross canteen set up to provide physical comfort and encouragement to troops of Army&#39;s 2nd Infantry Division as they prepare to leave for the Middle East. (Franklin Fisher / S&S)

Volunteers at Osan Air Base help the staff at a Red Cross canteen set up to provide physical comfort and encouragement to troops of Army&#39;s 2nd Infantry Division as they prepare to leave for the Middle East. (Franklin Fisher / S&S) 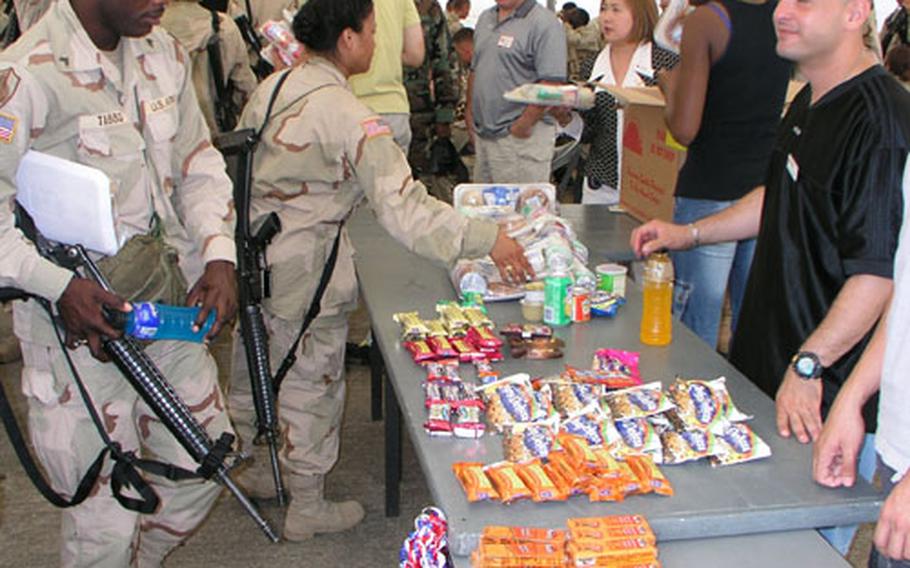 At the Red Cross canteen set up at Osan Air Base, South Korea, troops of Army&#39;s 2nd Infantry Division grab a snack Tuesday while awaiting a flight to Kuwait. (Franklin Fisher / S&S) 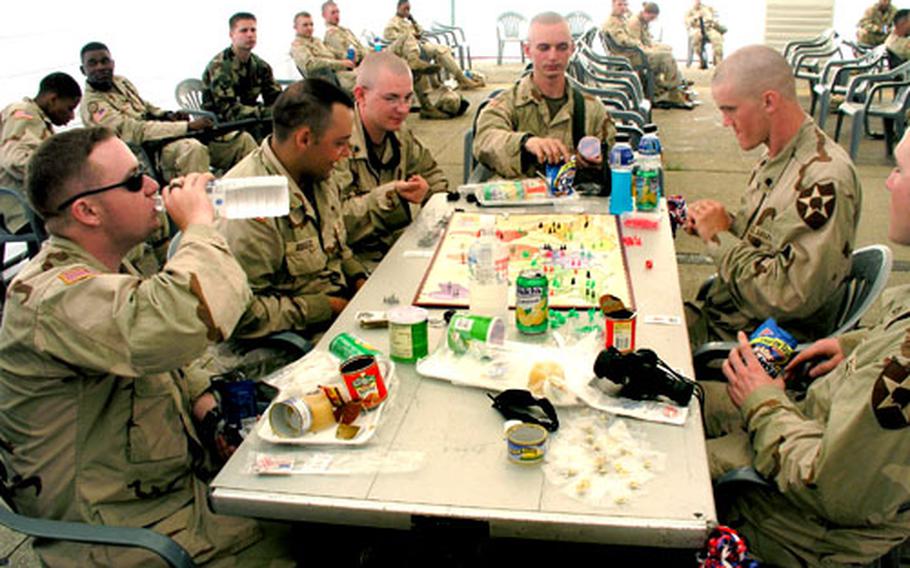 Troops of the Army&#39;s 2nd Infantry Division enjoy a board game and free snacks and beverages at a Red Cross canteen at Osan Air Base. (Franklin Fisher / S&S)

OSAN AIR BASE, South Korea &#8212; In a few moments, a dark-haired airman would walk in and tell them they had 10 minutes for a last smoke or trip to the latrine, but for now the hundreds of soldiers in desert tan uniforms sat relaxing in the big white tent.

The airlift of the brigade, known as the Strikeforce, began here Monday and is expected to last about a week. The troops will pick up their tanks and other combat equipment in Kuwait, then move into Iraq.

Transporting all of them is, almost inevitably, a process that entails stretches when the troops had to wait, including two hours or so for their flights at Osan.

To help make the Strikeforce troops comfortable during those few hours, the American Red Cross station at Osan set up a canteen in two big tents. They did it with help of the division, the Air Force and volunteers at Osan and Camp Humphreys, a big U.S. Army helicopter base about 40 minutes away.

The Red Cross put out tables with free snacks and drinks. The Air Force provided tents, lights, generators, fans and recreational items such as cards and board games, Solis said. The Army had a contractor bring in plastic chairs; various community organizations on base, including officers&#8217; spouses and Family Services, also helped, he said.

Pfc. Timothy McLaughlin, 25, of Hollister, Calif., is a wheeled vehicle mechanic in the same battalion.

Such canteens have distinct morale value, said division commander Maj. Gen. John R. Wood, who was at the base Tuesday for a flightline farewell.

What he saw of the canteen, said Cpl. Raymundo Arjon, gave the feeling that somebody cares. &#8220;In this day and age, support is truly excellent,&#8221; said Arjon, who had just finished a chicken salad sandwich and chips and still was drinking from a green can of Welch&#8217;s lemonade. The 23-year- old from Moorpark, Calif., is in Company B of the same battalion as Pusey and McLaughlin. He repairs fire control systems on Abrams tanks and Bradley Fighting Vehicles.

Arjon called the effort the best Red Cross campaign he&#8217;d seen yet. &#8220;It takes the support of other airmen and soldiers, and they make it better for us because they know what we&#8217;re going through. They have some type of idea. Either they&#8217;ve been through it or they have family members who are going through it now.&#8221;

With a green light from Red Cross national headquarters in Washington, D.C., Solis got with the Air Force, which already was working on plans to provide meals and housing in case troops hit lengthy flight delays.