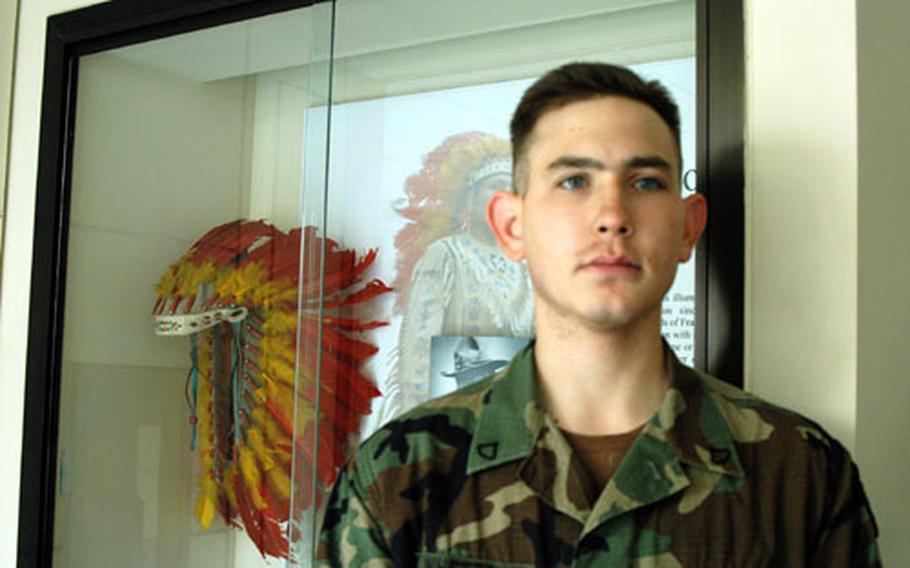 Pfc. Wayne Whetzel was one of several speakers Friday in the Community Activity Center here to address more than 60 soldiers and civilians from 501st Corps Support Group and Area 1 in conjunction with Native American Heritage Month.

Whetzel, who says he is one-quarter Shawnee Indian and serves at Camp Red Cloud with the 2nd Infantry Division, said the event and others like it give American Indians a chance to talk about their culture and for troops to learn more about the history of the United States.

&#8220;It educates people about the foundation of society and about some of the hardships that the Native Americans struggled through when English settlers first came to our land,&#8221; he said.

Many people in the military have a stereotypical view of American Indians, Whetzel said.

&#8220;A lot of people I talk to, their idea of Indians as they would call them, is very negative. They have watched cowboys-and-Indians shows on television where the cowboys kill the Indians because they are so bad,&#8221; he said. &#8220;That is what most people understand as far as Native American culture is concerned.

&#8220;The better we can educate people on the history of Native Americans, the more they are going to understand the relevance to all the wars we fought in the U.S. People came from different countries and drove Native Americans from their land.&#8221;

Whetzel&#8217;s own European ancestors were among those with negative impressions of American Indians, he said, adding that in the 18th century a number of the Whetzels were scalped by American Indians.

The survivors extracted a bloody vengeance, killing a number of Indians and swearing &#8220;never to make friends with the Indians.&#8221;

The settlers&#8217; treatment of American Indians was inevitable, but more should be done to incorporate native culture into the military today, Whetzel said, noting he learned traditional American Indian stories from his mother and still enjoys hunting deer, rabbit and squirrel with a bow and arrow like his ancestors.

&#8220;I haven&#8217;t seen much [American Indian culture in the military]. I think there should be more,&#8221; Whetzel said, adding his American Indian heritage has helped him appreciate South Korean society.

His talk was followed by a lecture on American Indian history by University of Maryland professor Greg Whitesides.

The camp is named for Cpl. Red Cloud, a Winnebago Indian who won a posthumous Medal of Honor for conspicuous gallantry during the Korean War.