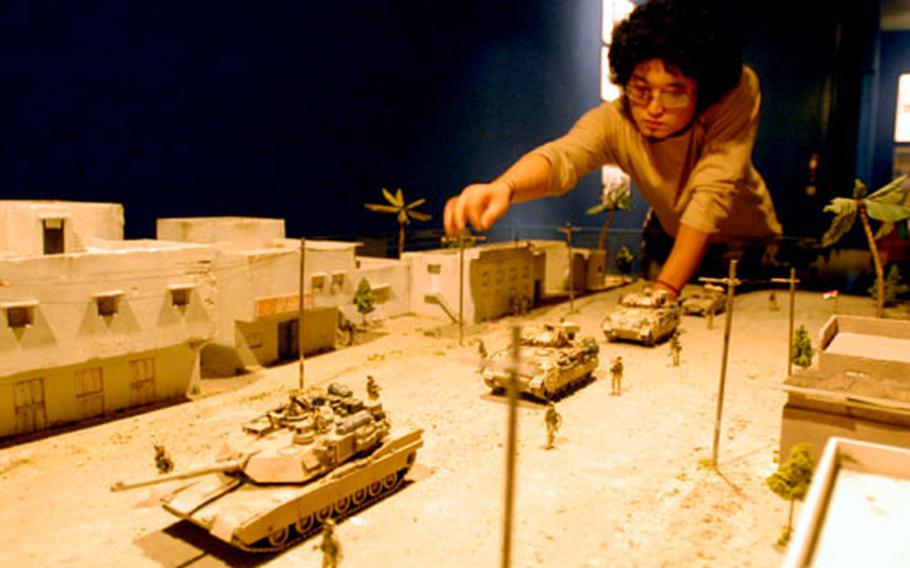 CAMP RED CLOUD, South Korea &#8212; A terrain model of soldiers patrolling the mean streets of Ramadi, Iraq, has been installed at Camp Red Cloud to highlight the exploits of 2nd Infantry Division troops in the desert.

The model, based on photographs of soldiers from 2nd ID&#8217;s 2nd Brigade Combat Team (Strike Force) taken by Stars and Stripes in Iraq in August and September, features more than a dozen dismounted troops, an M1A1 Abrams Main Battle Tank, two Bradley Fighting Vehicles and a Humvee patrolling along a street. Some of the soldiers on the ground are poised to raid one of the buildings in the street.

Designers, who installed the model on Monday, used the Stars and Stripes photographs to make the scene as realistic as possible, right down to the palm trees lining the street and bullet holes in the buildings, said Sejin Kim of Amuse Space, the company contracted by 2nd ID to produce the model.

It was built by South Korean sculptor So Kyong Jin, a graduate of one of his nation&#8217;s most famous art schools, Seoul&#8217;s Hong Ik University.

So has made models for television commercials and even created a baseball trophy for the South Korean pennant race. But he called the Strike Force project his first military model.

The young artist, who sports a goatee, Afro and tinted glasses, said that as he worked, the conflict in Iraq did not enter his mind &#8220;because I was so concentrated on the model.&#8221;

He said he considers the piece his greatest work.

The Iraqi buildings depicted took the most effort to craft using plaster, he said. &#8220;The soldiers and the tanks are models&#8221; bought from a store, &#8220;but I designed, colored and built the buildings from scratch.&#8221;

The Strike Force model has been placed in the 2nd ID Museum&#8217;s &#8220;Changing Gallery&#8221; beside a video featuring the Stars and Stripes photographs from Iraq set to music by the 2nd ID band.

Another terrain model, depicting the 2nd ID soldiers who fought in the battle of Chipyong-ni during the Korean War, was delivered to the museum last week.

The Korean War model is part of a display of several objects recovered from the battlefield at Chipyong-ni. There, in February 1951, the division won what its members and others have characterized as its greatest victory. During the battle, 5,000 men from the 23rd Infantry Regimental Combat Team held out against six Chinese divisions of more than 60,000 men, a museum official said. The victory was the first for United Nations forces since the Chinese entered the war, he said. Objects in the display include a fur-lined Chinese winter hat, a Chinese bugle and a Medal of Honor received by one of the 2nd ID soldiers.