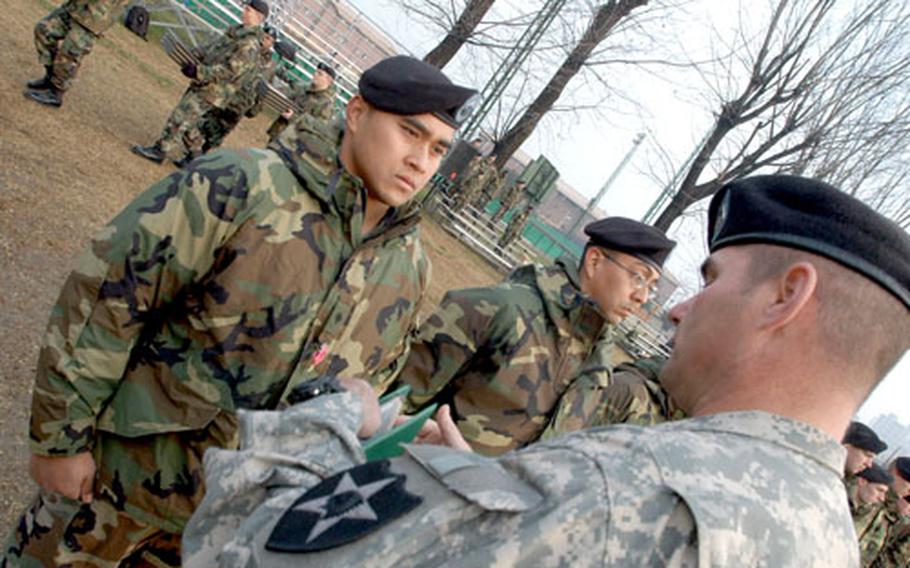 CAMP RED CLOUD, South Korea &#8212; A U.S. soldier from the tiny Pacific island of Pohnapei was awarded a Bronze Star with Valor here Monday for bravery during combat in Fallujah, Iraq, last year.

&#8220;Under direct fire and without regard for his own personal safety he engaged the insurgents with small arms fire and hand grenades, killing three and wounding the fourth. His actions single-handedly eliminated the threat and ensured the safety of his crew and vehicle,&#8221; the citation states.

Iraq&#8217;s battlefields are thousands of miles from Roby&#8217;s adopted home on Guam and from his home island of Pohnapei in the Federated States of Micronesia.

It was on Pohnapei that Roby&#8217;s journey to the U.S. military began when his grandfather told him stories about the bravery of U.S. servicemembers who chased away Japanese occupiers of the island during World War II, he said.

After his family moved to Guam, Roby became a keen sportsman, playing football and volleyball and even paddling a small boat around the island in an epic race that left the crew exhausted, he said.

&#8220;They told us it was going to be pretty hot, especially where we were,&#8221; he said, adding that he had lost several buddies in the desert fight.

When insurgents attacked his tank in Fallujah Roby acted on instinct, he said.

&#8220;I was just doing my job as a loader and what I was supposed to do when we came into contact. Everybody in my platoon deserves an award. Everybody did their job and risked their lives,&#8221; he said.

The battle and the rest of his time in Iraq taught Roby some valuable lessons, he said.

&#8220;Afterwards I prayed a lot. I never realized how life is easily taken. It only took three or four minutes (to kill the three insurgents). You see that person and a minute later he is dead,&#8221; he said.

Since arriving in South Korea five months ago Roby, as the 2nd ID surgeon&#8217;s driver, has come to grips with dangerous local roads and gained a reputation as a hard-running front-rower with the 2nd ID rugby team. His rugby teammates knew he had been to Iraq, but he never talked about his personal bravery before he got the medal.

The young soldier said his goal is to become a noncommissioned officer and pass on lessons he has learned in combat to other soldiers.