Recruiting for a higher kind of duty 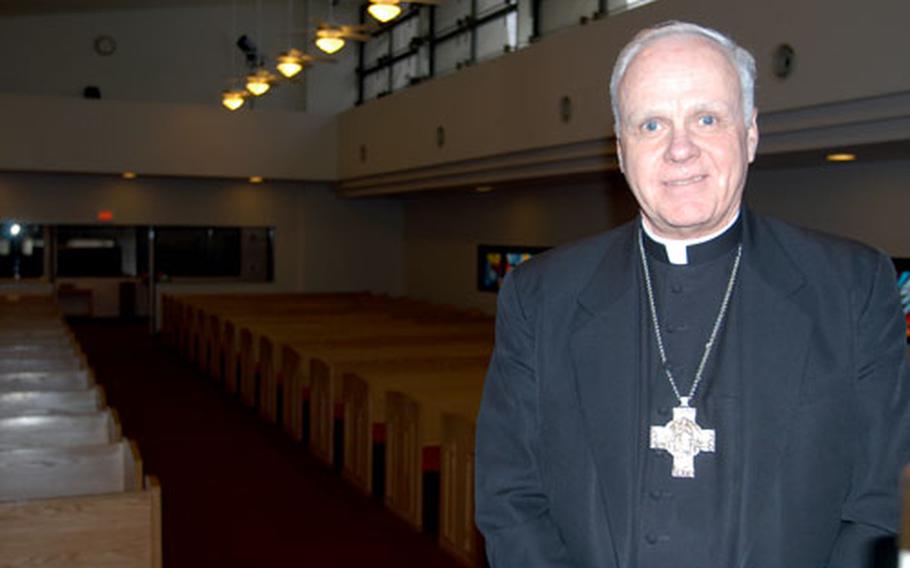 Archbishop for Military Services Edwin O’Brien is visiting Catholic chaplains and troops in the Pacific as part of an annual worldwide tour to reach the 1.5 million Catholics on military bases. O’Brien was at Misawa Air Base and Sasebo Naval Base, Japan, last week. (Jennifer Svan / S&S)

MISAWA AIR BASE, Japan &#8212; Archbishop Edwin O&#8217;Brien has made this trip before: a whirlwind Pacific tour that began Holy Week in Singapore and is to end in May in Alaska, with stops in between at military bases in Japan, South Korea, Hawaii and Okinawa.

On this journey, however, besides meeting with Catholic priests and the faithful in uniform and celebrating the sacraments, O&#8217;Brien also is making an urgent appeal to eligible troops and family members: Consider the priesthood.

A worldwide shortage of priests is impacting Catholics on military bases, said O&#8217;Brien, the archbishop for military services, during a recent Misawa visit.

&#8220;We should have 800 priests in uniform,&#8221; he said. Instead, about 380 Catholic chaplains serve around the world. The Air Force, O&#8217;Brien said, is reassigning priests from eight installations because that service has too few to go around.

O&#8217;Brien, a civilian who heads the Archdiocese for the Military Services in Washington, D.C., attributes the drop in priesthood candidates throughout the United States and Western Europe to a &#8220;strong cultural tide against what the church stands for.&#8221; Secular and materialistic values of society run counter to those a priest embraces, he said.

Priests forgo a natural family and some independence. But O&#8217;Brien dismisses the charge that requiring celibacy is to blame for the shortage. Other denominations that allow their religious leaders to marry are facing similar problems, he said.

The Archdiocese for the Military Services financially co-sponsors with a civilian diocese a candidate&#8217;s priesthood training, O&#8217;Brien said. The candidate is ordained for the civilian diocese with the guarantee that after three years of service, he or she will be released for a full career as a military chaplain.

The Archdiocese for the Military Services ministers to almost 1.5 million Catholics, including active-duty servicemembers and their families, Veterans Affairs Medical Center residents and government employees working overseas. O&#8217;Brien, three auxiliary bishops and 30 staff members receive no financial support from the Catholic Church or the U.S. government.

The archdiocese helps the church and government with a separate but similar mission: &#8220;The church sees us as responsible for the spiritual welfare of all Catholics in uniform &#8230; and the government recognizes that. &#8230; Catholics need appropriate pastoral care &#8212; whatever Catholics need to save their souls,&#8221; O&#8217;Brien said.

The archdiocese oversees that care, O&#8217;Brien said. &#8220;Where there are misunderstandings or problems, we try to intervene and make sure justice is done for our people.&#8221;

Every year, O&#8217;Brien and his three bishops fan out to visit with Catholic chaplains and servicemembers around the world. One of the bishops is in Europe now; the others are touring the States &#8212; one east of the Mississippi River, the other west.

O&#8217;Brien thinks the archdiocese needs to do a better job of reaching the Catholics it serves.

He&#8217;s hopeful a new program called Catholics Seeking Christ will achieve that goal. The pilot program so far has trained 50 active-duty volunteers ages 18 to 29 to be peer leaders at five military installations in the States. Supported with DVD, CD-ROM, Web and print resources, the servicemembers lead small group discussions about Catholicism.

In his 40 years as a priest, O&#8217;Brien said he&#8217;s done nothing more important than seeing this program off the ground.

&#8220;We are not reaching as we should be a quarter-of-a-million Catholics on active duty,&#8221; he said, due in part to the shortage of priests, the heavy operations tempo and the military lifestyle.