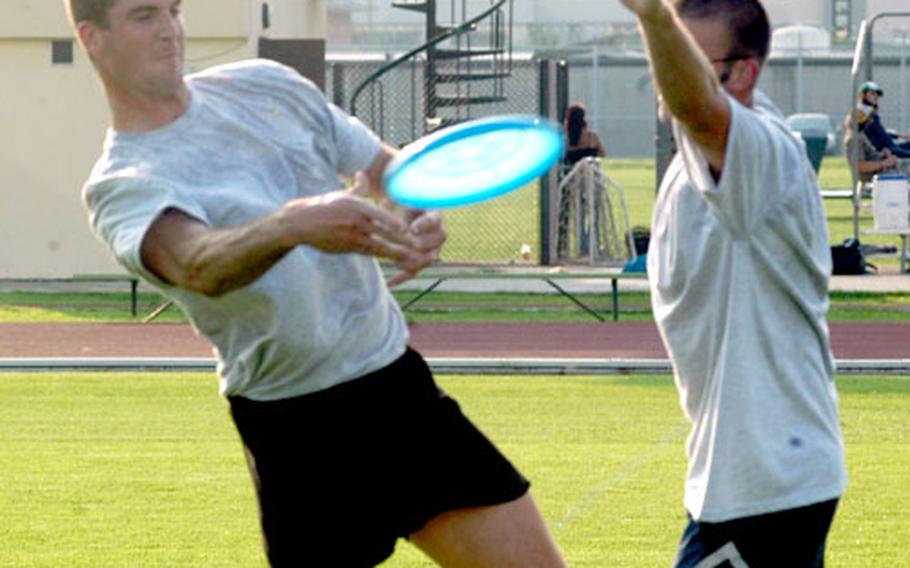 Kevin Caroon tries to toss a Frisbee past Mike Furman during a pickup game Thursday at Caserma Ederle in Vicenza, Italy. Enthusiasts on base are trying to form a recreational league. (Kent Harris / S&S)

Ultimate Frisbee, the sport, is alive and well at Caserma Ederle. Or at least it will be if a dozen or so enthusiasts find some more people to sign up.

A pickup game demonstrates that&#8217;s not the case.

The object of the game is to throw the Frisbee from teammate to teammate until one of them is past the goal line. Players are allowed one step after they make a catch. And defenders count to 10 while waving arms and trying to deflect a throw. If the Frisbee is deflected or drops to the ground or is intercepted by the other team, there&#8217;s a change in possession.

Mike Furman, an Air Force technical sergeant, might be as close to a &#8220;pro&#8221; Frisbee player as there is in Vicenza. He&#8217;s been playing for years, and one team he was on at Fort Bragg, N.C., actually competed in a national tournament a few years back.

In that case, you&#8217;re endlessly spinning through the air, with opposing teams trying to abruptly end your flight. When mistakes are made, you crash to the ground &#8212; only to be rudely snatched up and sent flying again.

Of course, most of the 173rd Airborne Brigade is in Afghanistan, serving what is expected to be a one-year mission. Capt. Aaron Cummings, a member of the 1st Battalion, 508th Infantry Regiment, is back home on rest and recuperation. His wife, Lori, is one of the Panthers. And an opponent in the game.

Ultimate Frisbee, at least the way it&#8217;s being played in Vicenza, isn&#8217;t a contact sport, so men and women can play together. Speed and hand-eye coordination are important. Probably the most important ability is being able to toss a Frisbee with distance and/or accuracy.

Furman says that just takes practice. He&#8217;s developed a handful of different throwing motions to send the disc sailing away. Several of those he learned while playing in the States. He says that although Frisbee wouldn&#8217;t be listed by many people at the top of a sports list, it&#8217;s a fairly common game for servicemembers.