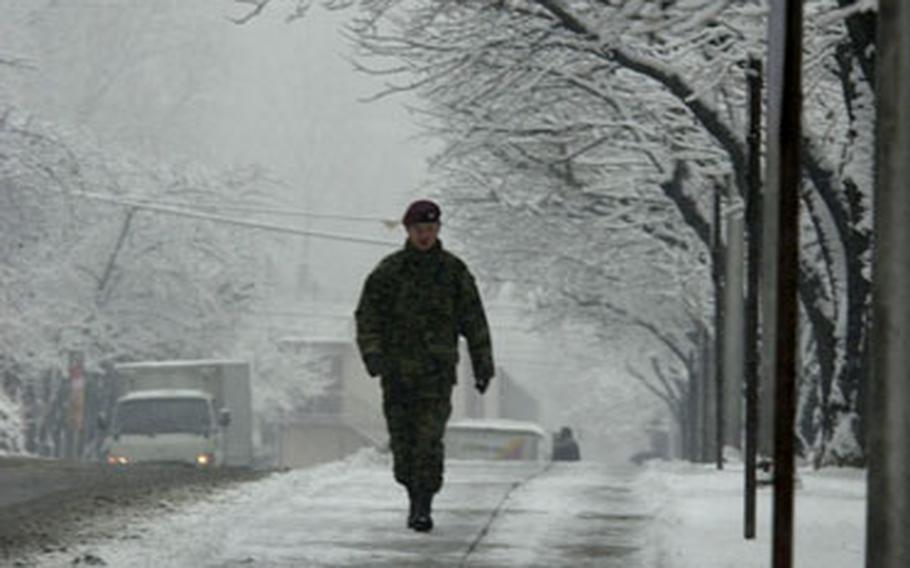 A soldier walks along the snowy I Corps Boulevard on Yongsan Garrison, South Korea, on Tuesday morning. (T.D. Flack / S&S)

A soldier walks along the snowy I Corps Boulevard on Yongsan Garrison, South Korea, on Tuesday morning. (T.D. Flack / S&S) Only C.T. Joy Elementary School at Chinhae Naval Base and Pusan American School at Camp Hialeah in Busan were open Tuesday.

Area IIn the Army&#8217;s Area I north of Seoul, nonmission-essential staffers were released from work at 1 p.m. Tuesday before roads turned icy, said Margaret Banish-Donaldson, Area I Support Activity spokeswoman. &#8220;They&#8217;re worried about the people driving to get home safe,&#8221; she said.

The early release applied to both U.S. and South Korean employees at all seven Area I installations, she said.

Also canceled was the biweekly Area I staff meeting at Camp Red Cloud &#8220;because of the road conditions,&#8221; Banish-Donaldson said.

Buses and taxis were in service by the afternoon, she said.

Area IIAt Yongsan Garrison in Seoul, the Army&#8217;s Area II Support Activity reported only &#8220;slight&#8221; impact on base operations. Road conditions were at red when the workday began but changed to amber shortly after noon.

Some services, including the Child Development Center and Army Community Service, operated with reduced staffing.

Taxi and bus service did not operate until road conditions were changed from red to amber. Child and Youth Services closed at 2 p.m.

Officials directed that Area III installations reduce staffing to essential personnel and canceled the Area III radio show, which would have required Camp Humphreys officials to drive to the American Forces Network offices in Osan.

&#8220;So, other than just inconvenience or people coming in a little bit later than usual, it&#8217;s business as usual,&#8221; Area IV spokesman Galen Putnam said.

On the Metro No. 1 subway line that includes stops in Osan Air Base and Camp Humphreys areas, an equipment malfunction at Byeongjeom Station caused a 30-minute delay, said Korea Railroad Corp. officials.

Korail officials said trains were exceptionally busy Tuesday because many travelers opted not to use their cars on slick streets.

Snowfall in some of the areas where U.S. military installations are located was as follows Tuesday:

Overnight Tuesday, up to an additional inch was expected to fall at Osan Air Base, Camp Humphreys and Kunsan Air Base, and a slight &#8220;trace&#8221; was expected in the Camp Red Cloud area and in Seoul, said Staff Sgt. William Mendez, a weather forecaster with the Air Force&#8217;s 607th Weather Squadron in Seoul.

On Wednesday, the snow was to have ended in the Osan-Humphreys area by around noon and in the Kunsan area by evening, Mendez said.

As of Tuesday night, no further snow was in the forecast for Thursday and Friday, Mendez said.