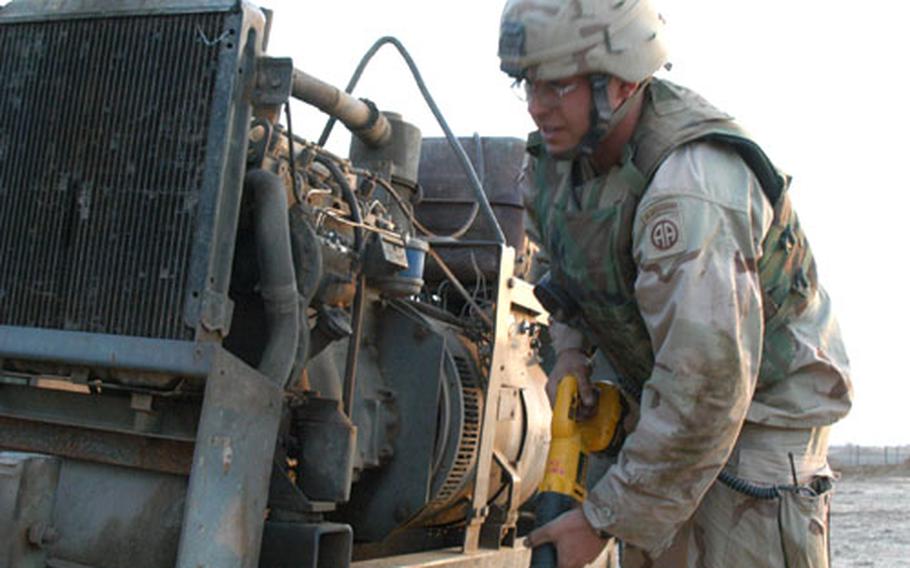 Staff Sgt. James Gaw of the 307th Engineer Battalion from Fort Bragg, N.C., works on an Iraqi tractor outside the south gate at LSA Anaconda. Soldiers converted the tractor into a welder for repairing their equipment. (Seth Robson / S&S)

Staff Sgt. James Gaw of the 307th Engineer Battalion from Fort Bragg, N.C., works on an Iraqi tractor outside the south gate at LSA Anaconda. Soldiers converted the tractor into a welder for repairing their equipment. (Seth Robson / S&S) 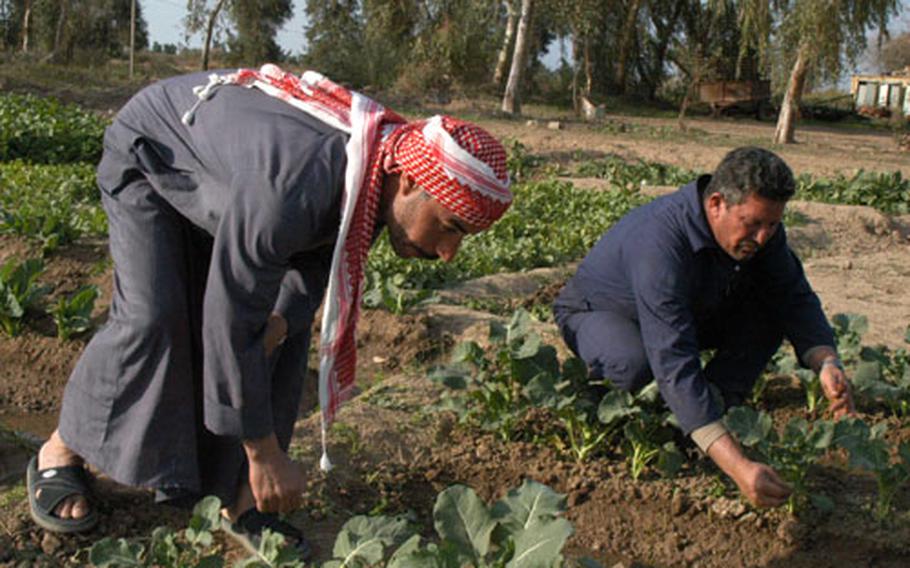 Workers tend crops at "Saddam&#39;s farm," which the U.S. Army is helping locals turn into a co-operative near Balad, Iraq. (Seth Robson / S&S) 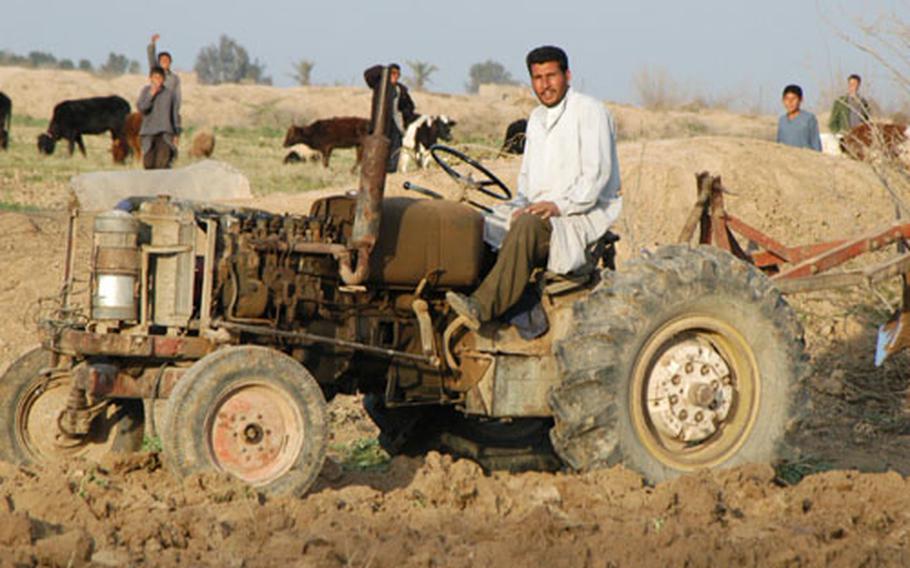 Iraqi farm tractors are old but do the job, like this one, plowing a field near Balad, Iraq. (Seth Robson / S&S) 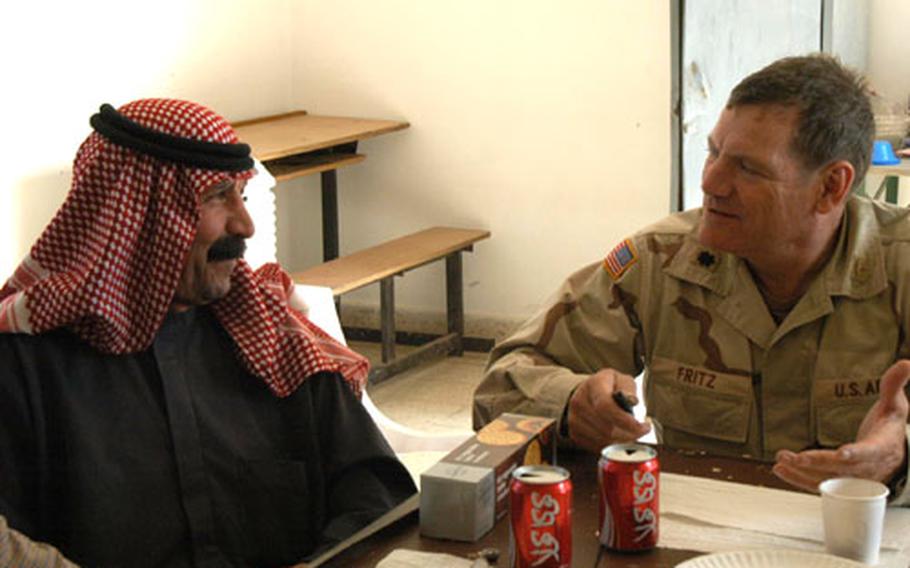 Maj. Randy Fritz of the 308th Civil Affairs Brigade talks with school headmaster Sheik Shahab Ahmed, one of the local Iraqi leaders from Balad involved in the planning of a farm co-operative aimed at boosting farmers&#39; incomes. (Seth Robson / S&S)

Soldiers from the 308th Civil Affairs Brigade, based at LSA Anaconda, met Iraqi scientists and leaders from the Balad area, north of Baghdad, at the farm last week.

The Iraqi Ministry of Agriculture used to operate the farm but locals say its produce benefited only Saddam Hussein and his family.

Maj. Randy Fritz, public health chief at the 308th&#8217;s humanitarian assistance co-ordination center, said the goal is to create a collectively owned and managed farm so local farmers can get better prices for their produce.

The 308th started the project with a meeting in Balad, so the Iraqis could choose a board of directors to run the co-op. The Iraqis selected a soil scientist, a mechanical engineer, a food vendor, a veterinarian and a school headmaster to serve on the board.

&#8220;We are looking at using it for demonstration [of farming techniques] and as a fish hatchery, but the big thing will be to use it as a consolidation facility for the small farmers who sell their fruit and vegetables from pickup trucks,&#8221; he said.

&#8220;They don&#8217;t get good prices because they are competing with each other. We want to bring the produce to one place where it can be weighed, washed and graded to [U.S. Department of Agriculture] standards, then packed in boxes and, eventually, exported.&#8221;

U.S. citizens have donated $20,000 worth of seeds, which are being distributed throughout the district, he added.

While southern Iraq is a land of sand and camels, the area north of Baghdad is a fertile, green place where the first farmers began working the fields thousands of years ago.

Today more than 65 percent of Iraqis still live off the land, on small farms connected by a network of dirt tracks and irrigated by canals and aqueducts that run for hundreds of miles.

The farm where the co-op will be based is reached along a winding driveway lined with tall gum trees. There are eight fishponds and 110 beehives there. There used to be 250 hives, but many were lost last year when people stripped the land of food to survive during shortages caused by the war.

The farm still has Iraqi Ministry of Agriculture signs on several buildings, such as a large concrete block warehouse that will be used for grading produce.

Dr. Radhi Al Safah, an agricultural engineer who sits on the co-op board, said the area around Balad is prime farmland.

&#8220;This area is very old, and it is the greenest part of Iraq. It is famous for grapes, cucumbers, tomatoes, watermelons, oranges and sunflowers,&#8221; he said.

Al Safah said the co-op has applied for $2 million in U.S. government aid to build the facility, which could include the area&#8217;s first supermarket, a gas station and a slaughterhouse for processing meat in another part of Balad.

The co-op will serve an area running from Taji in the south to Samara in the north, which is home to 1 million people and 150,000 farm families.

Another co-op board member, Sheik Shahab Ahmed, the headmaster of a local school, hopes farmers will eventually export their crops.

However, it will take a big effort to get the land back to full production, he said.

&#8220;There is no fertilizer because everything is destroyed. We need to rebuild the infrastructure,&#8221; he said.

&#8220;Before 2000 we exported fertilizer. Now most has been stolen and the production for this year will be down because there is no fertilizer.&#8221;