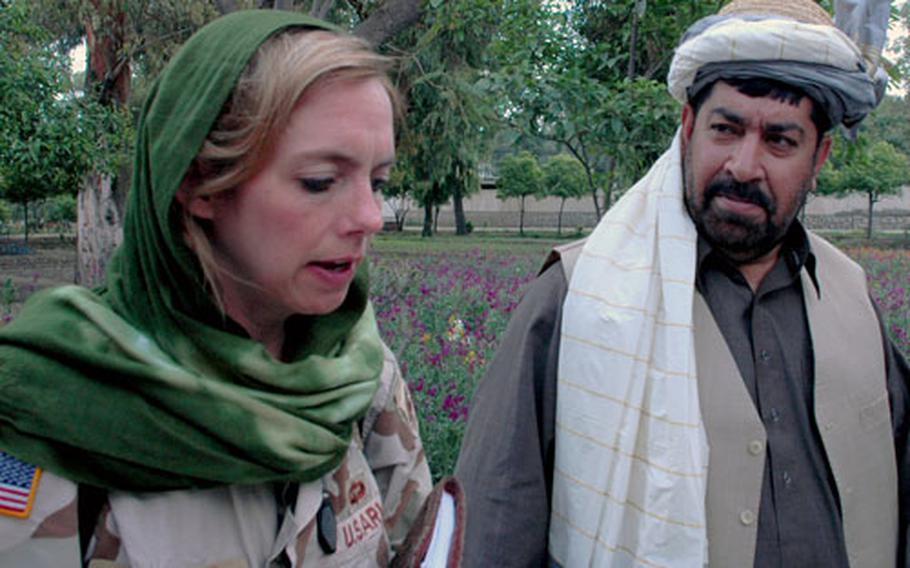 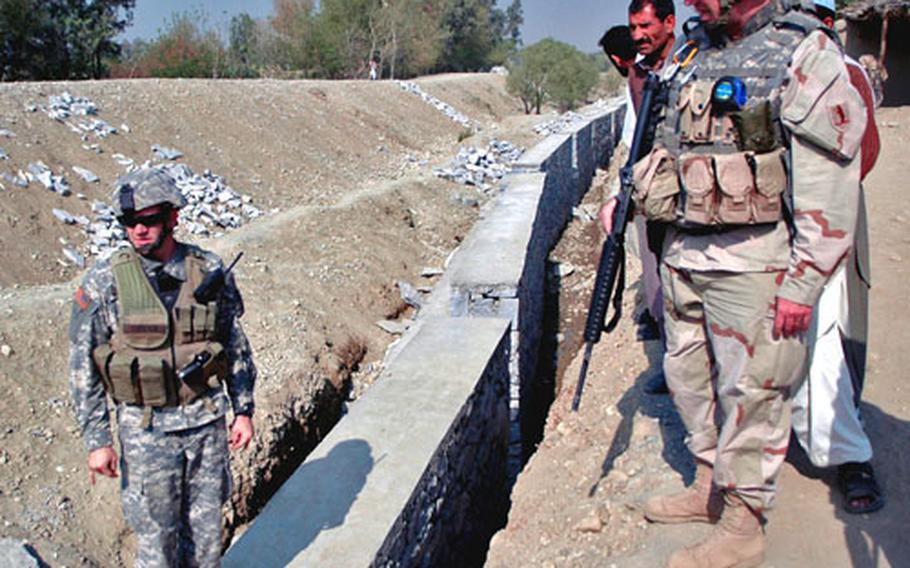 Capt. Christopher Corsten, left, examines a retaining wall on a road project in Jalalabad, Afghanistan. Corsten, with the Jalalabad Provincial Reconstruction Team, said the team focuses on projects, like roads, that will give locals the framework on which to rebuild the province themselves. (Anita Powell / S&S)

JALALABAD, Afghanistan &#8212; Lt. Col. Linda Granfield recalls her first meeting with local leaders in June &#8212; when Afghanistan&#8217;s eastern Nangarhar province was threatened with the worst flooding in decades &#8212; as a defining moment in her tenure as the area&#8217;s top civil affairs officer.

Nine months later, the Jalalabad Provincial Reconstruction Team, composed mostly of civil affairs reservists from around the U.S., has forged an unusually tight bond with local leaders who have, for the most part, enthusiastically embraced the team&#8217;s mission and resources.

Nangarhar Gov. Gul Agha Sherzai has shouldered that responsibility with what seems to be extraordinary zeal. Sherzai, a native of Kandahar who was appointed to the position by the central government, has made numerous public appearances urging residents to eradicate poppy crops, to respect the government&#8217;s resettlement process for refugees, to report suspicious activity and to work to improve the province&#8217;s infrastructure through cooperation.

His efforts, he said, have gained public support, though problems remain: notably, changing attitudes and ferreting out corruption and administrative problems within the government.

But for most residents, the majority of whom are illiterate, proof of success is in the projects. To that end, Granfield&#8217;s team has funded more than $1 million worth of roads and funded the construction or reconstruction of numerous government buildings and irrigation projects.

&#8220;This looks great,&#8221; Capt. Christopher Corsten said as he walked down a rebuilt road in Jalalabad, surrounded by the road&#8217;s Afghan contractors, who proudly pointed to their handiwork.

Part of the team&#8217;s philosophy is to focus on projects, like roads, that will give residents a framework on which to rebuild the province themselves. The team takes recommendations from local leaders in choosing projects.

Granfield said she feels the team &#8212; which will redeploy in less than two months &#8212; has made significant progress in what she considers the team&#8217;s primary goal.