Reconstruction a risky business in Iraq’s ‘Triangle of Death’ 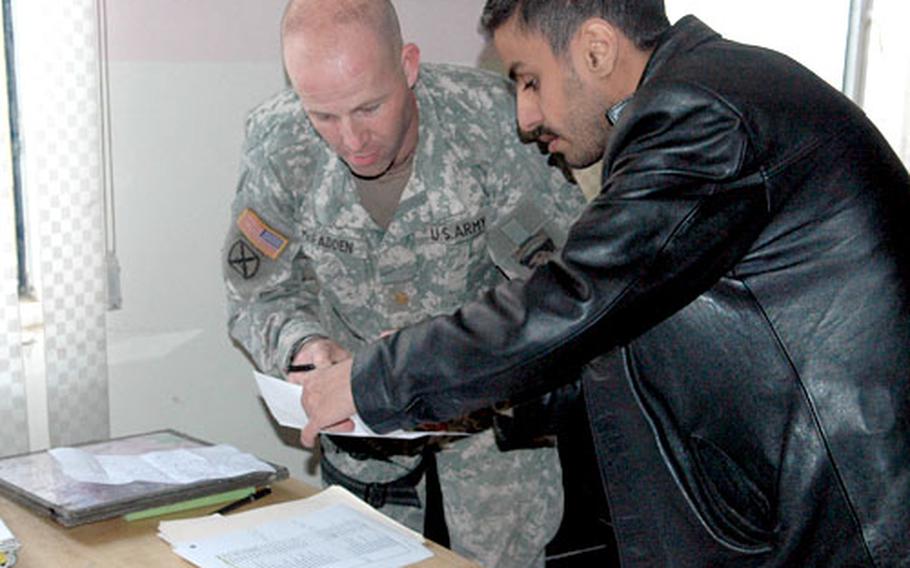 Maj. Eric McFadden consults with Osama Nabil, an Iraqi engineer who was kidnapped in November while he was working on American-led reconstruction projects south of Baghdad. (Andrew Tilghman / S&S)

MAHMUDIYAH, Iraq &#8212; A civil engineer working with U.S. troops on reconstruction projects here, Osama Nabil was driving away from a water treatment plant one night last fall when three cars converged to block his path.

On a dusty and pock-marked farm road rarely patrolled by police and military authorities, a dozen masked gunmen swarmed around his car and kidnapped Nabil along with another Iraqi engineer riding with him.

Four days later, Nabil&#8217;s captors released him unharmed and he soon returned to work alongside American Army engineers. Yet his harrowing story underscores the challenges U.S. troops face as they try to manage reconstruction projects here in one of the country&#8217;s most persistently violent regions.

U.S. forces consider civil reconstruction a vital tool for defusing violence in Iraq, hoping that public works projects will bolster confidence in the newly elected government and undermine support for the ongoing insurgency.

But chaos and lawlessness here on the ground pose problems. Some workers are intimidated to enter the area. Equipment deliveries are frequently delayed on highways blocked by military units defusing makeshift bombs. And finished facilities can be targeted for attack by insurgents.

&#8220;The ongoing security concerns of the people, that is definitely the biggest ongoing challenge,&#8221; said Maj. Eric McFadden, the head of 2nd BCT&#8217;s civil-military projects.

Despite the hurdles, McFadden&#8217;s unit has completed nearly $3 million in reconstruction projects since arriving in October, including the restoration of service at a massive water treatment plant and renovation of a medical clinic, several schools and a police station. Road repair projects and trash collection services are also under way.

While the Army Corps of Engineers manages most reconstruction contracts, guiding the projects along to completion requires daily attention from U.S. troops in the field. For example, after a bomb destroyed a water supply pipe leading to a treatment plant last fall, local troops stepped up security around the area. In another case, a hired road crew halted repair work recently when an Iraqi army patrol, unfamiliar with their project, feared they were setting roadside bombs.

And, perhaps most importantly, workers can be hard to find and retain.

&#8220;The big issue is trying to get workers to work in some areas. The perception is that this area is not safe,&#8221; said 1st Lt. Charlie Clayton.

&#8220;But it&#8217;s really not as bad as most people think. We have some contractors who do some work down there and they are submitting new bids because they see that it can be done,&#8221; Clayton said.

Several workers also asked U.S. soldiers visiting the same construction site to visibly pat them down and search them outside the building. The workers wanted to leave onlookers with the impression that the troops stopped there for security reasons rather than checking on a U.S.-funded facility.

Nabil and the engineer who was abducted in November returned to work soon afterward, and their team continues to help McFadden and other soldiers renovate and rebuild dozens of public buildings in the towns and cities south of Baghdad.

Soldiers try to reduce the threats the Iraqis face. They used to have weekly meetings at Camp Stryker, but now they meet twice a month at a discreet Iraqi government building in Baghdad.

American soldiers who work closely with Iraqis often find inspiration in their commitment to forging a future for their country.