Recon Marines back on Okinawa The families of 3rd Reconnaissance Battalion Marines and sailors began waving and cheering Thursday evening at Camp Schwab when they caught sight of the buses that carried their warriors home from a seven-month deployment to Iraq. () 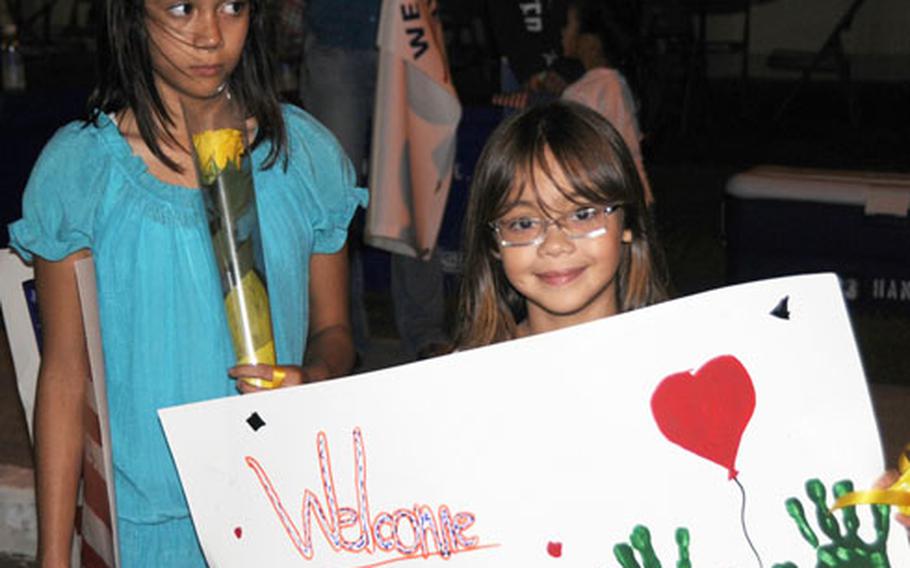 Hannah, left, 13, and Sarah Parkhurst, 9, planned to give their father, Gunnery Sgt. Timothy Parkhurst, yellow roses as they welcomed him home to Camp Schwab on Thursday evening after his seven months in Iraq. ()

CAMP SCHWAB, Okinawa- The loss of a Marine during 3rd Reconnaissance Battalion&#8217;s Iraq deployment was a harsh reminder that although Anbar province has been quieter in recent months, it remains a dangerous place.

More than 200 recon troops returned Thursday night to Camp Schwab from the seven-month deployment. But they returned without Sgt. Michael H. Ferschke Jr., who was killed Aug. 10 during door-to-door searches in a town north of Baghdad.

It was a death that hit the tight-knit battalion hard. But like "true professionals, the Marines stepped up" and continued the mission, said Maj. Brian Howler, the battalion&#8217;s executive officer.

Ferschke&#8217;s death also highlighted one of battalion&#8217;s toughest challenges &#8212; keeping vigilant in a region that has been more peaceful than in past deployments,

"It was difficult as we operated in areas over and over to not treat things as routine," Howler said. Marines had to remember that "outside the wire, danger still existed."

But, for the most part, Anbar was a different place from past deployments, several Marines said.

This time, "going out there was like night and day," said Staff Sgt. Julius Hawkins, 28, from Conley, Ga., who took part in the Battle of Fallujah in November 2004. "I didn&#8217;t even fire one shot this time. The Iraqis were able to handle things on their own with a little help from the U.S."

For Sgt. Scott Redmond, 22, from Syracuse, N.Y., it was "long periods of boredom followed by short periods of excitement."

The "cool" part was finding numerous weapons caches "because you knew you were taking bad stuff out of the hands of bad people," Redmond said.

In all, the battalion found about 50 weapons and explosives caches throughout Anbar, Howler said. The battalion also conducted 600 patrols and completed 25 major operations.

Now that the battalion has returned to Okinawa, its Marines will get back into the swing of things and resume training for future deployments, he said.

For Navy Lt. Jeff Parks, the battalion&#8217;s chaplain, the swing of things includes "eating sushi and drinking a Corona."

His wife, Sharon Parks, quickly assured him she had both waiting for him.