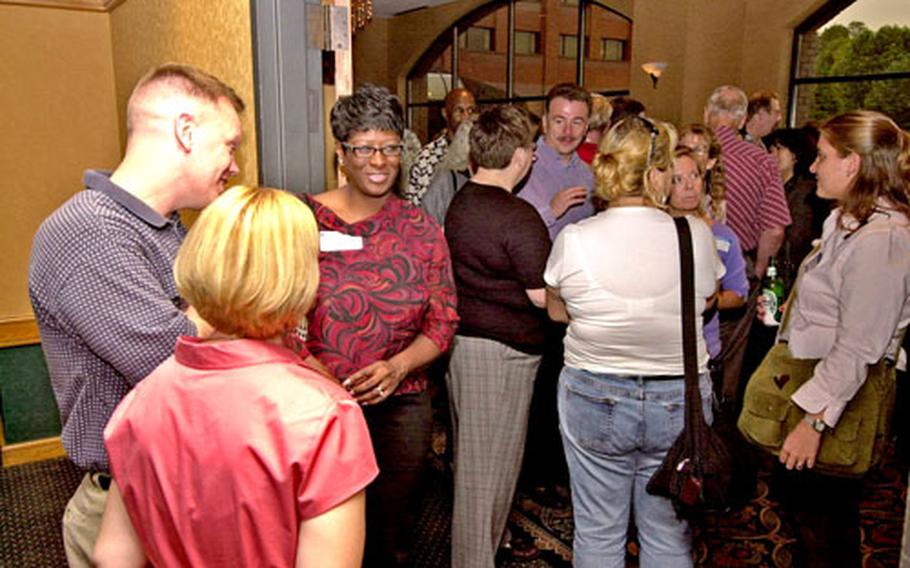 Members of the DODDS-Korea community in Area II gather at a reception for new teachers at the Dragon Hill Lodge on Friday evening. (T.D. Flack / S&S)

YONGSAN GARRISON, South Korea &#8212; New teachers were feted at an Area II U.S. Army Support Activity reception Friday and given a primer on their importance to the military.

Lt. Gen. Charles C. Campbell, 8th Army commander, told the crowd of about 200 Department of Dependents Schools staff and family members at the Dragon Hill Lodge that they shared &#8220;a very powerful partnership&#8221; in ensuring the next generation would be raised with character and integrity.

Campbell stressed how important education is to the military families and said the educators are now part of a &#8220;recruiting and retention issue.&#8221;

Getting to know the troops might take the teachers out of their comfort zone, Campbell said, but the effort is worthwhile.

Area II commander Col. Ronald C. Stephens, with his own children in all three schools on base, thanked teachers for their valued efforts.

Toth said the command, staff, parents and children all were exceptional, calling Korea the &#8220;assignment of choice&#8221; for educating the 4,269 enrolled students across the peninsula.

Linda Bocek, a speech and language pathologist arrived in Korea for the first time about six weeks ago. She said she appreciated the reception, which gave her a chance to meet people and mingle.