Recalling the cost of the Battle of Okinawa 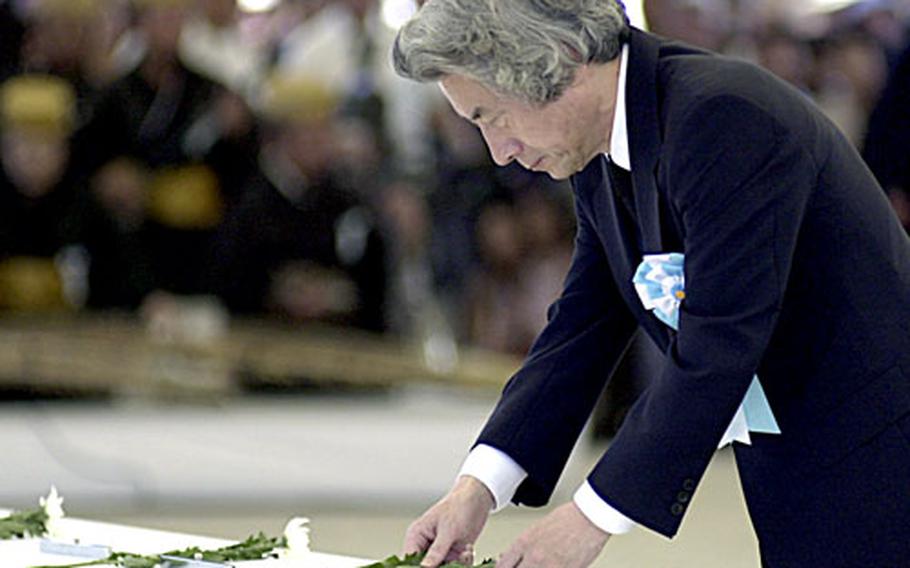 Japanese Prime Minister Junichiro Koizumi lays a chrysanthemum on an alter in Peace Prayer Park in Itoman on Friday during a ceremony to commemorate the 61st anniversary of the end of the Battle of Okinawa. (Cindy Fisher / S&S)

Japanese Prime Minister Junichiro Koizumi lays a chrysanthemum on an alter in Peace Prayer Park in Itoman on Friday during a ceremony to commemorate the 61st anniversary of the end of the Battle of Okinawa. (Cindy Fisher / S&S) 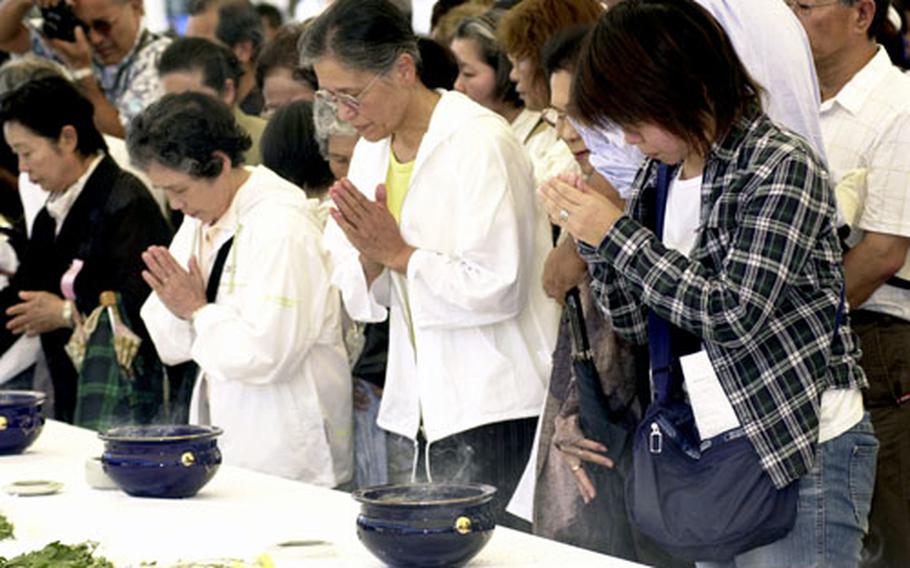 People burn incense on an alter in Peace Prayer Park in Itoman on Friday to offer prayer for those who died during the Battle of Okinawa. (Cindy Fisher / S&S) 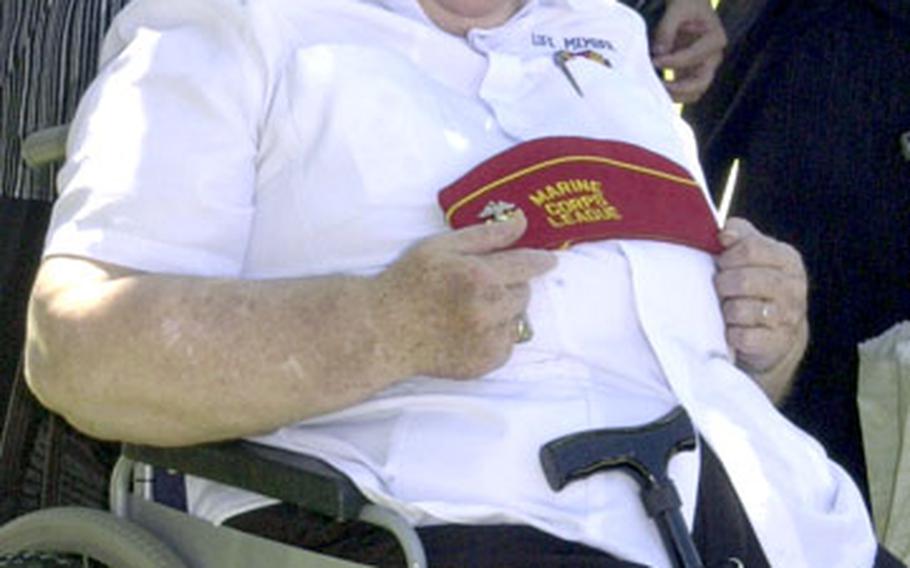 Retired Marine Master Gunnery Sgt. William H. Killian, who served during World War II, Korea and Vietnam, bows his head during a prayer at the section of memorial wall at the Cornerstone of Peace Monument on Friday. (Cindy Fisher / S&S) 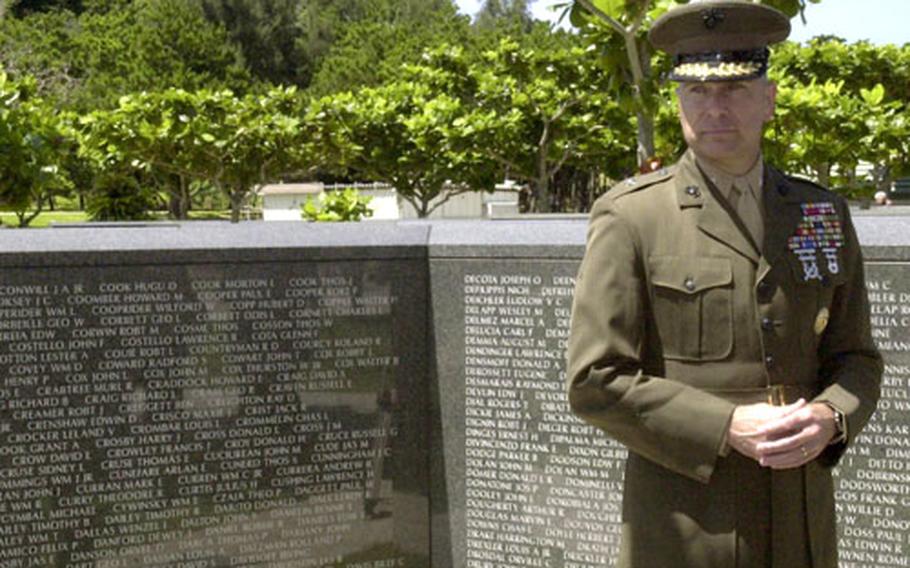 Brig. Gen. Mastin Robeson, deputy commanding general of III Marine Expeditionary Force, speaks to about 20 Americans present for a short ceremony Friday at the Cornerstone of Peace monument in front of the section of the memorial wall that bears the names of Americans who died during the Battle of Okinawa. (Cindy Fisher / S&S) 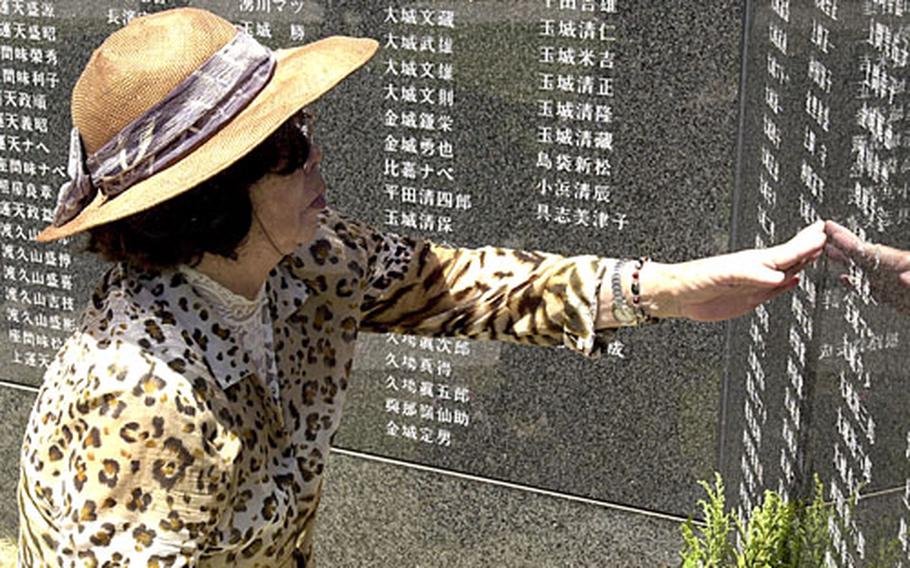 Setsuko Oshiro of Motobu, offers flowers, tea and prayers to a section of a memorial wall that bears her father-in–law’s name in the Cornerstone of Peace monument on Friday. (Cindy Fisher / S&S)

On Friday, 4,500 people braved a more natural heat to pay respects to the fallen, whose names are incised in Japanese, Korean and English on black granite walls stretching to the ocean. The names include more than 150,000 Okinawan civilians, about a third of the island&#8217;s population.

During an hourlong ceremony under a broiling midday sun, Japanese Prime Minister Junichiro Koizumi noted that Okinawa had overcome many hardships in the 61 years following the Battle of Okinawa, World War II&#8217;s bloodiest Pacific battle.

&#8220;Okinawa rose from ashes and has achieved remarkable development,&#8221; he said. &#8220;Yet the concentration of the U.S. military facilities on Okinawa has been a burden on people of Okinawa.&#8221;

Reducing the burden remains one of his most important goals, he said.

A plan to realign U.S. forces in Japan calls for moving 8,000 Marines and their dependents to Guam and replacing Marine Corps Air Station Futenma with an air facility on Camp Schwab.

Okinawa Gov. Keiichi Inamine urged those present to &#8220;possess a strong will to proactively pursue peace.&#8221;

Before the ceremony, in a small corner of the park, about 20 Americans held a brief service for Americans killed during the battle. The memorial walls include 14,007 American names.

Said Larry Alsop, 86, who married an Okinawa woman and retired here as a Navy lieutenant commander: &#8220;Everybody on this wall gave up the opportunity to live so the rest of us could continue with our lives. Some people don&#8217;t understand that.&#8221;

In the much larger Okinawa section of the Cornerstones of Peace, Setsuko Oshiro of Motobu offered flowers, tea and prayers at a section inscribed with names including her father-in-law&#8217;s.

Genei Shimabukuro, 74, of Okinawa City squatted at a section of a wall containing his brother&#8217;s name. Riding his bicycle to Peace Prayer Park took four hours.

&#8220;I came here to pay my respects to my big brother, Matsusuke, who died in the war at the age of 19,&#8221; he said. &#8220;I rode the bicycle to relive the hardship that the people who died in the war had gone through. I survived but I witnessed many kamikaze pilots make suicide attacks.