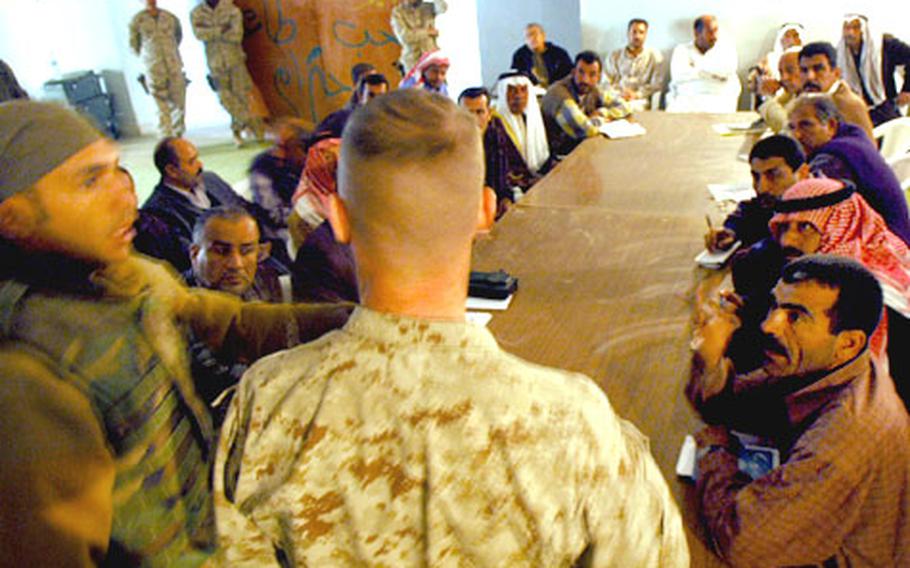 HUSAYBAH, Iraq &#8212; Some showed up in business-style blue blazers and neckties. Others wore more traditional garb of regal robes with white headdress.

There were 34 men in all who lined up outside the new U.S. Marine base in Husaybah on Wednesday and filed inside to meet the troops who swept through and took control of their dusty border town last week.

&#8220;I&#8217;m responsible for the reconstruction of this city,&#8221; Lt. Col. Robert Glover, head of the Marines&#8217; Civil Military Operations Center in Husaybah, told the men at the start of the two-hour meeting.

It was the first meeting between the Marines based in Husaybah and the self-appointed local leaders in the border city that was the scene of fierce street fighting and massive aerial bombing last week.

The Marines swept through the city of roughly 40,000 that had been a hotbed of insurgent activity and a key link in the smuggling route that brought weapons and suicide bombers from Syria into the major cities of Iraq.

Seated around a large table in the dimly lit auditorium that the Marines have occupied here, residents began to voice their concerns about life in their troubled city.

&#8220;Sir, there has been no food here for four months and there is no electricity. Please help us because we are all suffering,&#8221; said one man in a red-and-white headdress.

Capt. Richard Pitchford told the Iraqi men that the troops were working on re-establishing food distribution networks as well as fixing the electrical and water systems that were damaged in the fighting.

Pitchford urged the Iraqis to turn to him for help on security matters.

&#8220;If you are being threatened, if you are being pushed around, if there are people coming into the city, you need to find one of my patrols and point out who is doing this,&#8221; Pitchford said.

Marines say the city has remained largely calm since last week&#8217;s battle ended. Troops have reported finding several roadside bombs that may have been freshly set since the sweep, but they have reported no major incidents.

The group of Iraqis included a banker, a doctor and several merchants and local sheiks. Another meeting is set for Sunday, when a broader cross section of local tribes is expected. The Marines plan to discuss more details of the reconstruction efforts.

One local banker, Bashar Mahdy Alani, a 49-year-old father of three, said the meeting itself will not help the city&#8217;s residents.

Hamdis El Aloosi, a pediatrician and administrator at the local hospital, said he was primarily concerned with the damage caused to it by 500-pound bombs dropped from U.S. aircraft during last week&#8217;s fighting.

Troops in Husaybah said insurgents were using the hospital as a battle position.