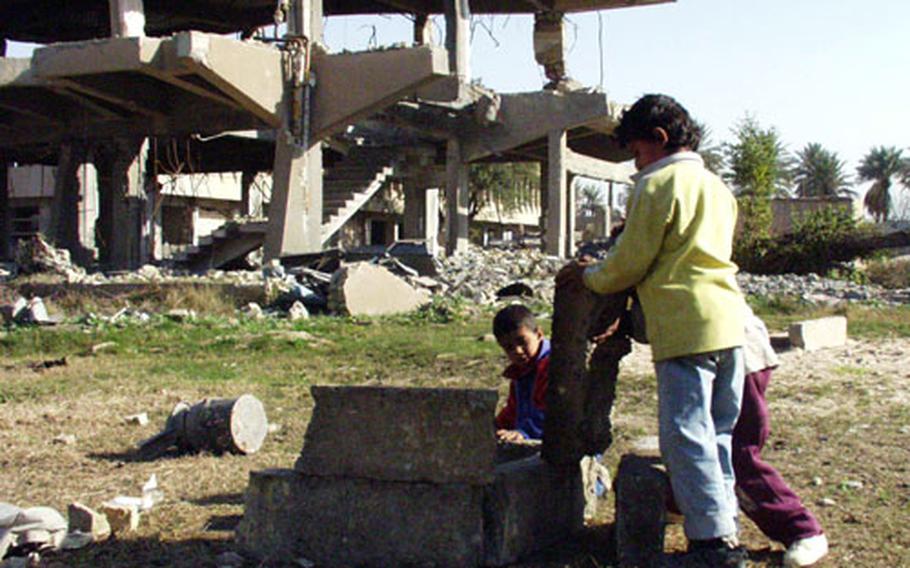 Metal worker Raad Jumah says he can&#39;t work in his smithy, and has even missed out on U.S. contracts, because of unreliable electricity. American officials say the situation is improving, and that the real rebuilding of Iraq&#39;s infrastructure has yet to begin. (Ward Sanderson / S&S)

The floor of his shop was speckled in drops of once-molten metal and dusted in iron filings. But there was no spark of torch, no squeal of grinder, not even the harsh glow of bare bulb. He was, in reality, powerless.

Now he gets bursts of power for two hours, followed by four without. He had to cancel a contract with the U.S.-led coalition to build window frames for its palace offices because he couldn&#8217;t finish the work. Jumah worries about how he will feed his seven children and pay his four workers.

The sentiment is widespread. Though the coalition has trumpeted the resurrection of power plants and other services, the great bulk of the Pentagon&#8217;s rebuilding of Iraq has yet to begin. But in the heart of Baghdad&#8217;s downtown coalition headquarters, engineers are just settling in for what administrator L. Paul Bremer has likened to Germany&#8217;s reconstruction efforts following World War II. The coalition&#8217;s new Program Management Office has the job of spending $18.6 billion on construction out of the $87 billion approved by Congress in October for postwar efforts in Iraq and Afghanistan.

Most of the Iraq construction money is to be spent directly on the nuts and bolts of rebuilding; $6 billion will be spent on security and justice.

&#8220;We&#8217;re trying to employ the best in the construction industry around the world to get this done,&#8221; said David J. Nash, a retired admiral and the office&#8217;s director. Nash said he believed the effort would take three to four years and its offices would, before then, fold into the new U.S. Embassy once the coalition authority disappears.

Nash and his engineers have nearly 2,300 projects to tackle, and he said their vastness dwarfs those of even agencies such as USAID and the U.S. Army Corps of Engineers, which have wrestled with getting shattered Iraq into the modern era since the war&#8217;s end. Both will continue to work in Iraq and will do so alongside Nash&#8217;s staff. It will all create jobs for legions of Iraqis. And it&#8217;s supposed to happen very soon.

&#8220;We should have all the contracts signed and be at full speed by mid-March,&#8221; said Steve Susens, a spokesman for the Program Management Office. This week, the office held informational meetings for potential bidders in the United States, said Navy Capt. Bruce Cole, another of its spokesmen.

Engineer George Gardner said much of the equipment dates to the 1950s and simply cannot be fixed.

Jumah, the lightless metal worker, complained that following the 1991 Persian Gulf War, power returned to normal in a few months. That&#8217;s partly because Saddam Hussein robbed power from other cities for the sake of his capital. And one rumor circulating in Baghdad is that Saddam used the threat of force, and even death, to make sure managers kept plants running.

After last year&#8217;s war, much of the plants did run &#8212; run away. Locals looted public buildings. Take Jumah&#8217;s electricity woes: Soldiers here talk of Iraqis melting down power cables for the copper. Though Iraq&#8217;s power system and total power output is nearly what it was before the war, engineers admit much of the problem is simply distributing the juice through broken pipelines. But Nash&#8217;s new endeavor throws $5.6 billion at electrical woes alone, compared with $1.5 billion already spent.

Not everyone cheered the new money on its way to Iraq. Critics of the Bush administration&#8217;s congressional plea for cash pointed to early promises that Iraqi oil production would pay for reconstruction. But while the Army Corps of Engineers reports about $5 billion from oil exports has been donated toward the Development Fund for Iraq, that&#8217;s still a relative drop in the gas can.

None of the legislative controversy, though, seemed to follow the new crew to Iraq. Spokesman Susens joked that his office was full of energetic types who simply want to build stuff.

He predicted real progress by summer.

Officials who have started what those engineers inherit already report smaller victories.

&#8220;The Iraqi people see the improvements and are optimistic,&#8221; Brig. Gen. David N. Blackledge, head of the 352nd Civil Affairs Command, said in a meeting with reporters. &#8220;Seven out of 10 Iraqis expect their country and their personal lives to be better five years from now.&#8221;

Blackledge&#8217;s soldiers work directly with units on the ground, responding outside the bureaucracy to immediate needs such as renovating schools and reopening hospitals. More students are enrolled in school now than before the war, Blackledge said. And all of Iraq&#8217;s hospitals and most of its clinics are open. These and other efforts have received $172 million, $126 million of which has been spent.

Civil affairs soldiers are stretched thin. Some 80 percent of military civil affairs experts already have served in Iraq or Afghanistan.

The total of 1,600 of them now in Iraq will shrink by 30 percent when new troops rotate into the country. Progress and the arrival of new faces such as Nash&#8217;s people could compensate for that. According to civil affairs Maj. Tom O&#8217;Donoghue, some soldiers have had to work in Iraqi government ministries themselves instead of staying on the ground. He didn&#8217;t think there would be a need for that anymore.

O&#8217;Donoghue has felt the pinch himself, spending more than 500 of the past 700 days in Iraq and Afghanistan. And he said Iraq is the bigger challenge of the two. Afghanistan was about drilling wells and building schools and bridges.

But infrastructure is just what Jumah said he has always enjoyed. He leafed through photos of his work: beds, bank vaults and storybook wrought-iron gates. He wants to return to the forge. Jumah would take either a power grid from Nash or a generator from Blackledge &#8212; something, anything, to get business going again.