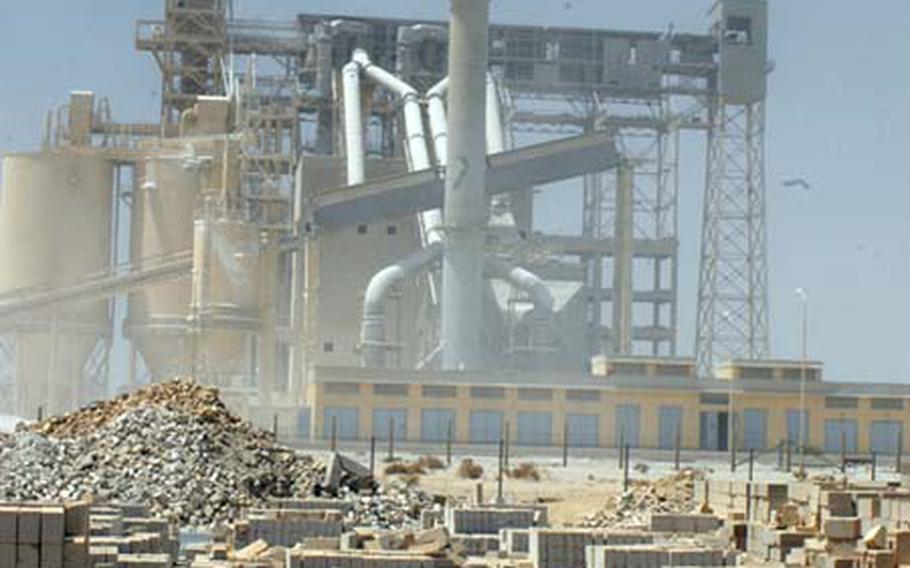 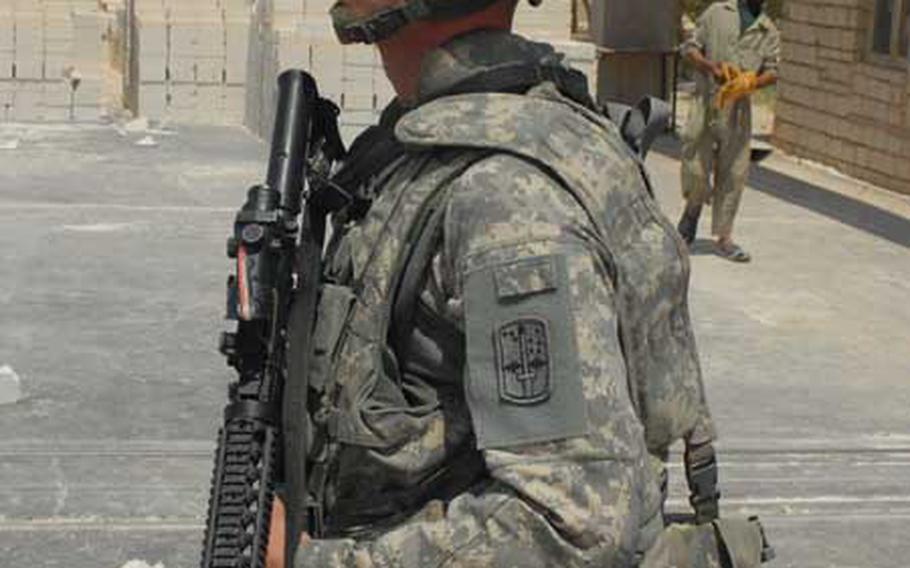 KARBALA, Iraq &#8212; Improved security means the U.S. may bring in experts from other Middle Eastern countries to train Iraqi workers whose skills have languished due to years of sanctions and violence.

He was echoing a plea from Iraqi manager Diaa Aftan Al-Mafraji, whose family has owned the Al Elaf factory in Karbala since 1989.

Shutler visited the plant on Thursday with another PRT member and an escort of soldiers from Battery B, 1st Battalion, 77th Field Artillery Regiment, 172nd Infantry Brigade.

PRT members listened to Al-Mafraji&#8217;s concerns on the factory floor while soldiers stood watch in a hangerlike building filled with lime dust that burned their nostrils.

Poorly trained workers were the first problem brought up by Al-Mafraji.

"These people are not qualified," he said in halting English, gesturing to a group of blue overall-clad workers shoveling lime powder nearby.

"I bought them safety shoes but they refuse to wear them," Al-Mafraji complained. "I bought milk, which they should drink to protect their lungs from the dust, but they took it home to sell," he said.

Labor problems have increased raw material costs since the brickworks must buy its lime from the government-owned factory next door. Employees there are released prisoners and people compensated for the loss of a family member in the battle against terrorists, he said.

"The factory produces lime at $110 to $120 per ton. The international price is $60. The factory doesn&#8217;t produce enough product to drop the price and the employees play a big role in that," he said.

In a country with sky-high unemployment, Walad Kais, 16, was lucky to get a job at the factory last month with the help of relatives. On Thursday he smiled broadly as he climbed a series of ladders to monitor a conveyor transporting lime powder into a silo.

"None of my friends has a job," he said, through an interpreter.

"We need to train these people and make them qualified to hold some of these positions," Al-Mafraji said, adding that the problem extends from the top floor up to management.

Shutler said the PRT can look at bringing people to Iraq from nearby countries, such as Dubai, to provide safety and technical training to workers in Karbala.

The advantage of bringing in experts from other parts of the Middle East, rather than the United States, included cost, safety and the ability of people from nearby countries to speak the local language, he said.

The PRT is helping set up a small business development center in town that could offer those sorts of courses, not just to the brick factory workers, but to workers from three other factories in the same industrial park, he said.

Al-Mafraji recited a litany of other problems including red tape that Iraq&#8217;s new government has rolled over from Saddam&#8217;s era.

The factory has not received any government fuel this year due to paperwork problems and it is buying it on the black market to stay in business, he said.

The bureaucracy means Iraqi products can&#8217;t compete with imported goods, made in countries with cheaper labor, he said.

The difficulty getting credit from Iraqi banks is another impediment. Banks charge 17 percent interest on business loans although that is supposed to fall to 14 percent, he said.

Iraqis come to the factory from as far away as Mosul and Najaf to buy the bricks, which they transport themselves to save costs, Al-Mafraji said.

The factory manager outlined numerous plans for stimulating commerce in Karbala, including building an oil refinery and power plant to take advantage of a planned oil pipeline through the area, generating electricity using the city&#8217;s garbage, and recycling sewage to grow plants in a green belt around Karbala.

"These projects would stabilize our province by providing some of these teenagers a chance for employment," he said.