Rebuilding for the future with Iraqi oil 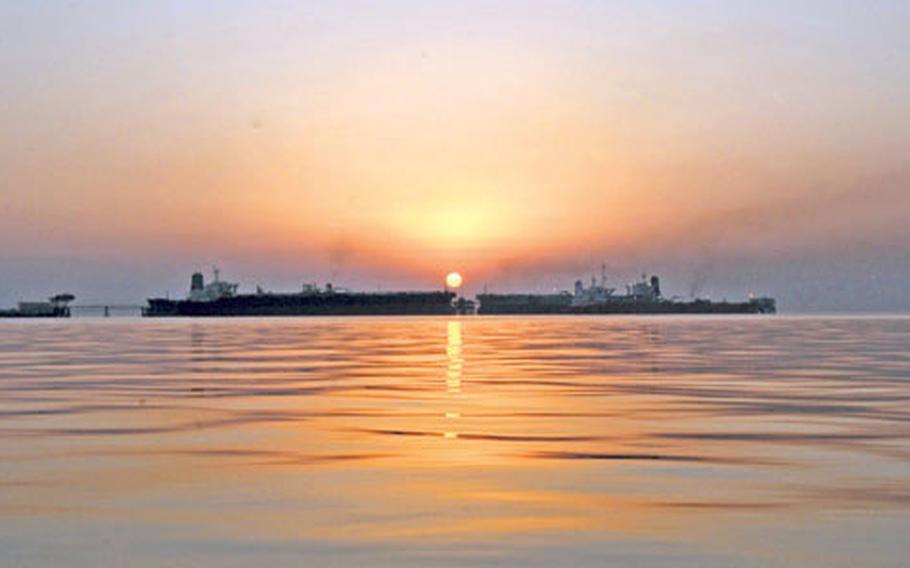 The sun sets behind the Basra oil terminal in the northern Persian Gulf in October. The off-shore facility pumps about 1.5 million barrels of crude oil a day into commercial oil tankers, making it the mainstay of the Iraqi economy. (Jennifer H. Svan / S&S file photo)

At that point, the war-torn nation should be able to tap into its cash cow at a rate equal to or higher than before the March 2003, U.S.-led invasion, according to the man overseeing the repairs.

The work, supervised by the Army Corps of Engineers, has included a series of projects meant simply to jumpstart the oil industry, not run or sustain it for the long haul, according to Navy Capt. Richard Fritzley, program director for the corps&#8217; Gulf Region Division, Oil Sector.

Iraq has 115 billion barrels of crude oil underground, which, depending on the source, is the second- to fourth-most proven reserves of any country in the world.

But while its oil potential is a trillion-dollar jackpot, the nation&#8217;s oil machinery is a jalopy.

&#8220;People were quite shocked at how poor of condition it was in,&#8221; Fritzley said. &#8220;The operators did not get the maintenance dollars or parts they needed. They&#8217;d cannibalize parts from [one machine to fix another].

&#8220;Immediately after the invasion, a lot of facilities were extensively looted&#8221; for copper wire and other materials, he said.

Among the projects supervised by the Army: repairs to wells, upgrades to offshore loading platforms, and working on plants to increase production of cooking gas and gas to run power plants.

Much of the military-sponsored work was contracted to and performed by companies such as Halliburton.

Oil revenue, which has historically accounted for 90 percent of the Iraqi government&#8217;s funding, would among other things pay for military and police roles now largely being handled by U.S. troops.

The oil pumped from Iraq produces fuel for cars, jets and heat, and gas for cooking and to power electric plants. The cash from oil pays for virtually all the government&#8217;s efforts to provide electricity, roads, healthcare and other needs.

After the work is finished in May, the corps could take on other oil projects, such as ones to &#8220;harden&#8221; and protect pipelines and other infrastructure from sabotage, Fritzley said, such as the Nov. 27 attacks to an oil facility near Kirkuk and pipeline south of Baghdad.

The U.S.-funded work is just a start toward furnishing what Iraq needs to become a modern oil superpower, according to one Western oil official in Baghdad who declined to be identified.

Daily production of 4 million to 6 million barrels per day, compared with next year&#8217;s goal of 3 million, is attainable if the Iraqi government spends its own money on new infrastructure, the official said.

Forty-three companies have already signed nonbinding &#8220;memorandums of understanding&#8221; with the Iraqi government to do oil business here, the official said.

Iraqis may need help in the short-term to run their oil industry, according to Mackenzie Eaglen, senior policy analyst for national security at the Washington-based Heritage Foundation, a conservative think tank.

Eaglen acknowledged, though, that Iraq has suffered from &#8220;brain drain&#8221; as experienced oil professionals left the country.

&#8220;In the long run, however, they are fully capable of running it, with the right advice, technical help, and technology from the U.S. and other countries,&#8221; Eaglen wrote in an e-mail. &#8220;Iraqis ran their own oil industry for many years and have considerable expertise.&#8221;