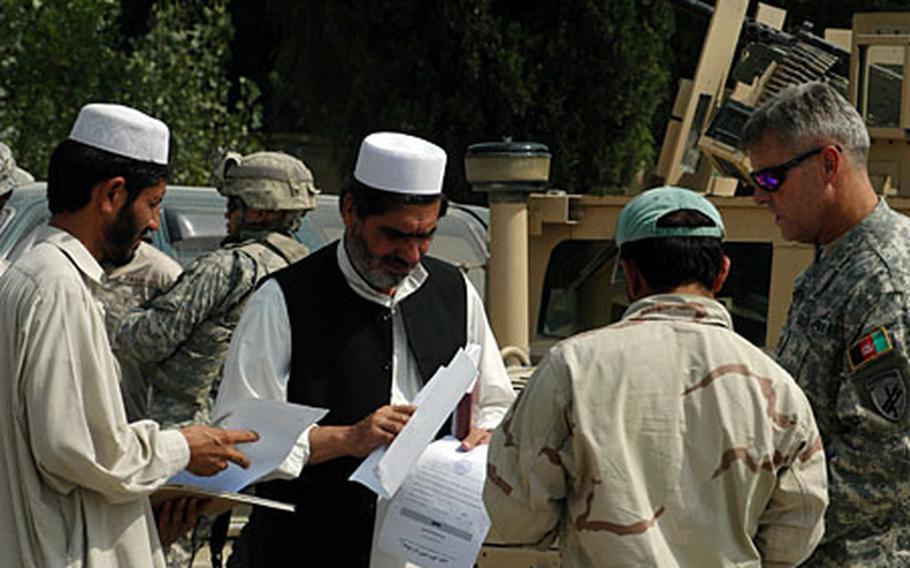 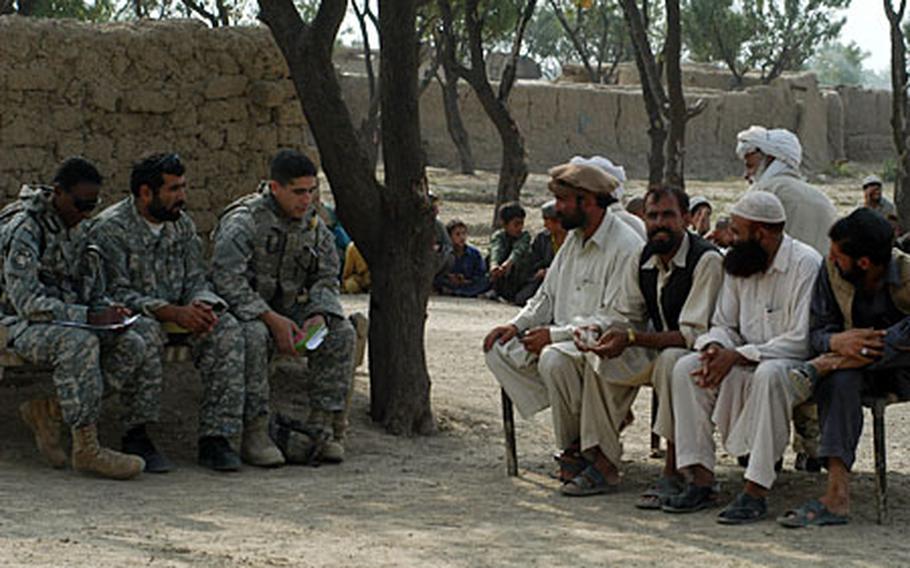 From left, Navy Cmdr. Adrienne J. Simmons, an Afghan interpreter and ensign Christopher Weis meet with elders from a camp that is home to roughly 1,000 refugees who now live in mud huts on land belonging to the Afghan Directorate of Agriculture. (Bryan Mitchell / S&S) 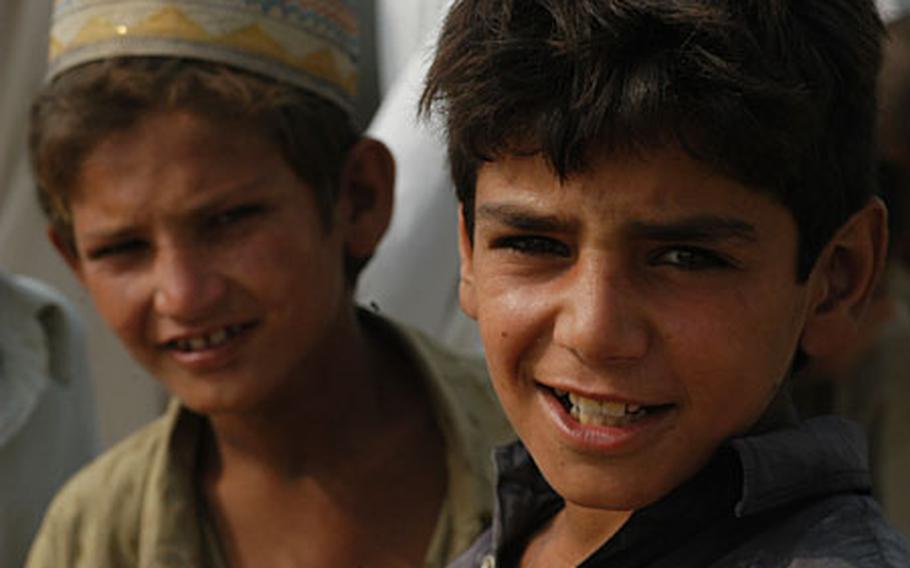 Two of the children were on hand for a meeting with refugees. (Bryan Mitchell / S&S)

FORWARD OPERATING BASE CHAPMAN, Afghanistan &#8212; This country has seen many changes in the past six years since the toppling of the Taliban.

Some communities buzz with economic activity, school bells ring to welcome children eager to learn and women participate in determining the future of the nation.

But for some, including the roughly 10,000 displaced people in Khost province, life is difficult.

That was the message delivered to a group of troops who visited one of the dozen refugee camps in this southern province of Afghanistan.

Ensign Christopher Weis and Cmdr. Adrienne J. Simmons spent an hour visiting with a handful of elders representing a group of uprooted Afghans who say they are desperate and destitute.

Weis and Simmons wanted to find out what the refugees need and determine how the U.S. military&#8217;s provincial reconstruction team in this pivotal province can lend a hand.

They were greeted with a list of grievances: a central government that ignores their plight; police officers who destroy their mud-hut homes for refusing to pay bribes; and, for reasons that remain unclear, an unwillingness by some to return to their homes.

&#8220;I think there&#8217;s still a lot of work ahead, especially in reconnecting with the government to help them get their land back,&#8221; Weis said after the informal meeting conducted on two bed frames under the punishing sun as scores of children looked on.

The camps mostly house Afghans who left the country in the 1990s to escape the civil war following the Soviet occupation and then the Taliban&#8217;s influence, officials say. The refugees, or displaced people, as the military refers to them, returned a couple of years ago but haven&#8217;t been able to return to their homes, or don&#8217;t want to.

The good news for those living in the camp is that the children receive immunizations, and that at least some of the men work as day laborers in the relatively bustling city of Khost. And, as of the most recent visit by the Provincial Reconstruction Team Khost, the children have new shoes &#8212; the result of a campaign organized by the wife of an Arizona National Guardsman.

Pfc. Kevin Brannon, 19, of Scottsdale, Ariz., said his wife and mother have collected and shipped to Afghanistan approximately 1,200 pairs of shoes.

Later that day, a soldier from PRT Khost met with a group of much more affluent and influential Afghans for a monthly emergency management meeting. Maj. Steven Kieler, 47, of Kieler, Wis., said the meetings are held to prepare for large-scale crisis like floods and earthquakes.

A host of senior officials from across Khost province converged in the governor&#8217;s compound to draw up plans for coping with a natural disaster. But the meeting also highlighted some of the problems that plague this fledgling democracy: trust and absenteeism.

&#8220;They asked for support from Kabul, but Kabul said no; they said that they would provide [humanitarian assistance] in a timely manner,&#8221; Kieler said. &#8220;And they are a little upset by that because it gives the impression that [government officials] don&#8217;t trust them.&#8221;

And Kieler said that &#8220;some of the key people were missing&#8221; for reasons ranging from too far to travel for the meeting to not wanting to battle the midday heat.

Between the morning question-and-answer session with the former refugees, and the afternoon planning conference with Khost&#8217;s senior leaders, it was just another day rebuilding this war-torn country &#8212; at an Afghan pace.