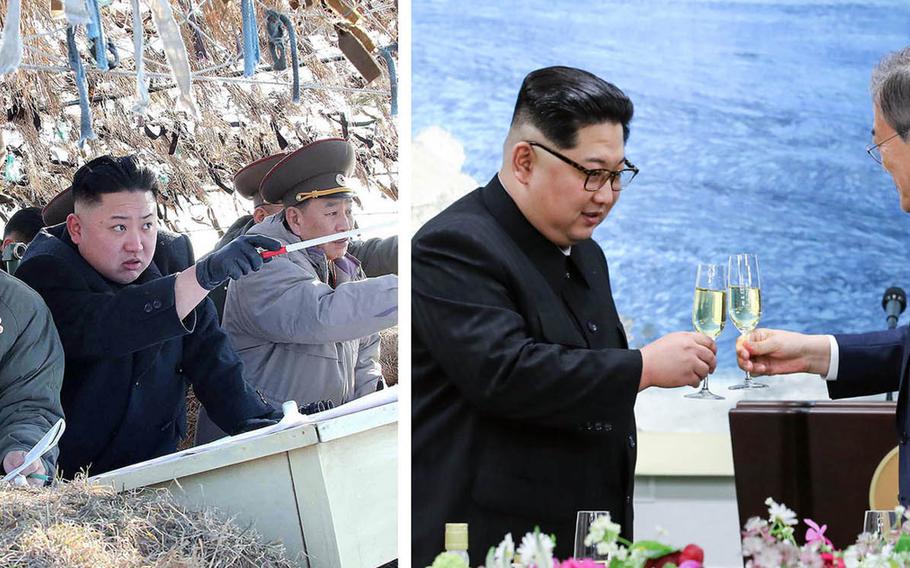 Images of North Korean leader Kim Jong Un warmly greeting South Korea's president during their summit contrast sharply with his reputation as a ruthless leader. At left, he's shown presiding over a ballistic-missile test last year. At right, he toasts Moon during their meeting on April 27, 2018. (Courtesy of KCNA/Inter-Korean Summit Press Corps)

Images of North Korean leader Kim Jong Un warmly greeting South Korea's president during their summit contrast sharply with his reputation as a ruthless leader. At left, he's shown presiding over a ballistic-missile test last year. At right, he toasts Moon during their meeting on April 27, 2018. (Courtesy of KCNA/Inter-Korean Summit Press Corps) 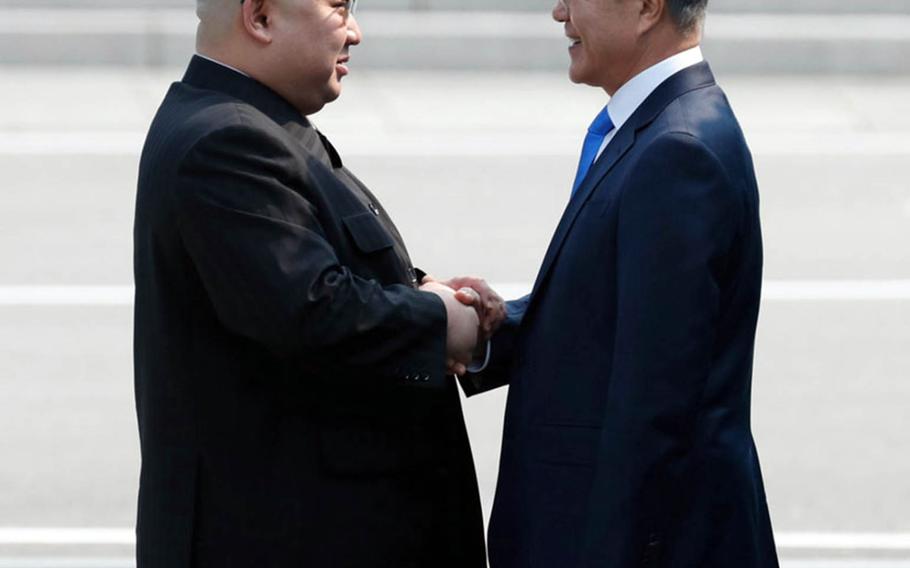 SEOUL, South Korea — He joked about missile tests and expressed embarrassment about the state of his country’s transit infrastructure.

With nearly every move broadcast live on screens worldwide, the 34-year-old Kim projected an image that was in sharp contrast to his reputation as a ruthless leader who presides over a regime that human rights groups say is one of the most repressive in the world.

“He’s just ordinary and normal. He has a charisma,” the senior adviser said in an interview with CNN. “It’s a new face of the current North Korean leadership. He is being very frank and honest.”

The inter-Korean summit capped what skeptics have called a “charm offensive” by the North as it maneuvers for leverage in negotiations with the United States over its nuclear weapons program.

The stakes were high as the talks set the stage for a summit between Kim and President Donald Trump that’s expected in coming weeks. The two men spent the past year trading threats and personal insults, with Trump mocking Kim as “little rocket man.”

“I think Kim has a lot riding on this,” said Ken Gause, who wrote a book about North Korean leadership dynamics. “I think that part of his personality syncs very well with President Moon. It will be interesting to see how well it jives with President Trump.”

Analysts say Kim, who took power after his father died of a heart attack in 2011, wants to present himself as a rational leader who should be treated as an equal on the global stage.

“He’s really, really changing his tune,” said Daniel Davis, a senior fellow with the Washington, D.C.-based think tank Defense Priorities. “I think his intent is to show people around the world that, ‘Hey we’re no longer the Hermit Kingdom. We want to engage.’” The third-generation leader, whose family has ruled the North since it was founded in 1948, was all smiles Friday as he shook hands with Moon at the border in the truce village of Panmunjom.

The 65-year-old South Korean leader said he had never been to the North so Kim led him briefly across the concrete slab that marks the line that divides the peninsula.

Moon replied that Kim’s recent commitment to a testing moratorium meant he could now sleep well. The North Korean leader replied, “I’ll make sure that you can sleep soundly.”

As the two leaders posed in front of a painting of North Korean mountains, Moon expressed his desire to visit the location.

Kim responded that he “might experience some inconvenience or embarrassment due to the lack of transportation in the North, compared to the South, but we’ll do our best so that you can travel in comfort.”

That was a rare admission of a problem in the communist state where the Kim family dynasty is surrounded by a cult of personality that portrays it as godlike, and criticism can mean severe punishments.

Gause said people who have met Kim have long described him as highly intelligent and engaging with a self-deprecating sense of humor.

But he took over around the age of 28 and had to fight to consolidate power, leading to a series of purges including the execution of his influential uncle. North Korean agents are suspected of masterminding the assassination of Kim’s half-brother last year in a Malaysian airport by having a nerve agent smeared on his face. Pyongyang has denied involvement.

Kim also has clamped down on individual liberties and freedom of movement in the country to prevent the flow of defectors.

Gause said the young leader was willing to employ brutal tactics to hold onto power, but his ultimate aim is to implement economic reforms and overcome the biting effects of international sanctions.

Kim, one of the world’s most powerful millennials, has surrounded himself with likeminded officials to help pursue the dual policy known as byungjin, which seeks military advances and economic growth.

His wife. Ri Sol Ju, who has recently been given the title “respected first lady” instead of “comrade” in the country’s official media, joined him for the banquet.

His powerful sister, Kim Yo Jong, was at his side most of the day, helping him put on gloves for a tree-planting ceremony and arranging papers for the signing of the final joint declaration.

Kim’s rebranding effort appeared to begin shortly after the most recent missile test in late November.

He declared in his New Year’s address that the North had succeeded in becoming a nuclear power and extended an olive branch to the South by agreeing to have the North join the Feb. 9-25 Olympics in Pyeongchang.

That was followed by a whirlwind of diplomacy, with Kim making his first trip out of the country since rising to power to meet with Chinese President Xi Jinping, a nod to the North’s communist benefactor.

He also was shown clapping along to K-pop songs during a South Korean concert in Pyongyang earlier this month.

Kim’s father, Kim Jong Il, held two summits in Pyongyang in 2000 and 2007 with Moon’s liberal predecessors, the late Kim Dae-jung and Roh Moo-hyun, respectively. But the warm ties that resulted evaporated as the North persisted with its nuclear weapons program.

“Kim clearly intends for North Korea to be treated as an equal, meaning these are not going to be talks in which North Korea is the one making all the compromises,” she said in an email. “For North Korea, ‘ending hostilities’ will entail strong concessions from the United States and [South Korea] as well.”