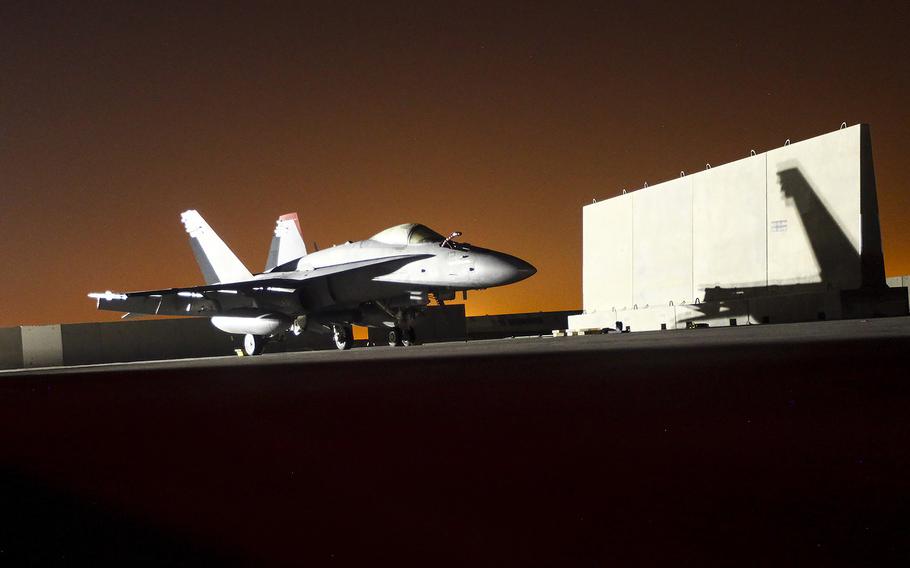 An F/A-18 Hornet sits on a flight line in an undisclosed location in Southwest Asia on June 9, 2015. On Wednesday, Nov. 4, 2015, coalition aircraft made 17 strikes to provide back-up to a Syrian Arab Coalition force made up of about 1,000 fighters in an assault on Islamic State militants in al Hawl, Syria. (Leah Agler/U.S. Marine Corps)

WASHINGTON — A newly formed group of U.S.-backed Syrian rebels has driven Islamic State militants out of an expansive region in northeast Syria, a U.S. spokesman in Baghdad said Wednesday.

The Syrian Arab Coalition led an offensive that pushed “several hundred” Islamic State fighters out of the Syrian town of al Hawl near the Iraq border, reclaiming about 255 square kilometers of ground from the militants, said Army Col. Steve Warren, a spokesman for the U.S.-led Operation Inherent Resolve.

“The Syrian Arab Coalition really fought with valor,” Warren told reporters Wednesday during a video conference at the Pentagon. “They really showed us something here, and we’re pleased by that.”

The offensive, planned and executed by U.S.-vetted leaders of the Syrian Arab Coalition, was part of the efforts that the White House announced Friday to ramp up anti-Islamic State missions in Syria, Warren said. That will include for the first time placing a group of less than 50 special operations troops as advisers in northern Syria and increasing airstrikes, the White House had said.

However, Warren said no U.S. advisers were on the ground during the battle. He said it was entirely planned and executed by the Syrian Arab Coalition and those groups associated with it.

The Syrian Arab Coalition force, made up of about 1,000 fighters, was backed by 17 coalition airstrikes in its assault on al Hawl. It killed 79 Islamic State fighters and wounded “many more,” as it seized the land, Warren said. He hinted the captured territory could be key to future operations in the region, though he did not provide specifics. Al Hawl is about 230 kilometers east of Islamic State stronghold Raqqa, a city that Defense Secretary Ash Carter told the Senate Armed Services Committee last week would be instrumental in the overall mission to defeat the militant group.

Warren said the success of the operation to capture al Hawl validated, in part, the U.S. commitment to arm the Syrian Arab Coalition as an alternative to its now mostly shuttered train-and-equip mission, which ultimately produced only a few dozen fighters.

“We’re willing to reinforce success and amplify our approach when it’s working well,” he said.