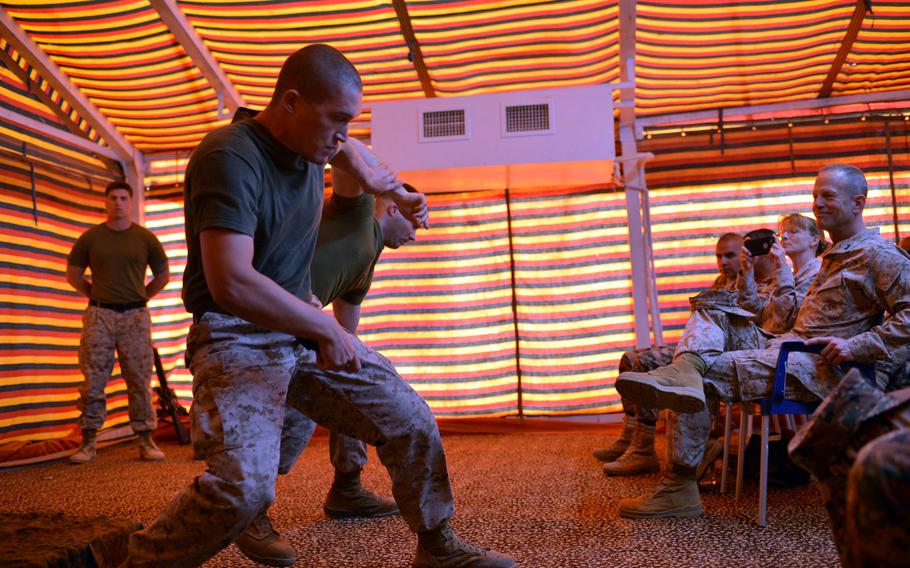 Marine Corps martial arts instructor Sgt. Bruce Sutherland, foreground, demonstrates a maneuver to strip a handgun from an adversary, played by fellow instructor Sgt. Bryan Tate, during a display for Marine and Jordanian forces at Camp Titin, Jordan, during the exercise Eager Lion in May 2015. Marine Maj. Gen. Burke Whitman, one of the exercise leaders, looks on from the right. (Steven Beardsley/Stars and Stripes)

Marine Corps martial arts instructor Sgt. Bruce Sutherland, foreground, demonstrates a maneuver to strip a handgun from an adversary, played by fellow instructor Sgt. Bryan Tate, during a display for Marine and Jordanian forces at Camp Titin, Jordan, during the exercise Eager Lion in May 2015. Marine Maj. Gen. Burke Whitman, one of the exercise leaders, looks on from the right. (Steven Beardsley/Stars and Stripes) 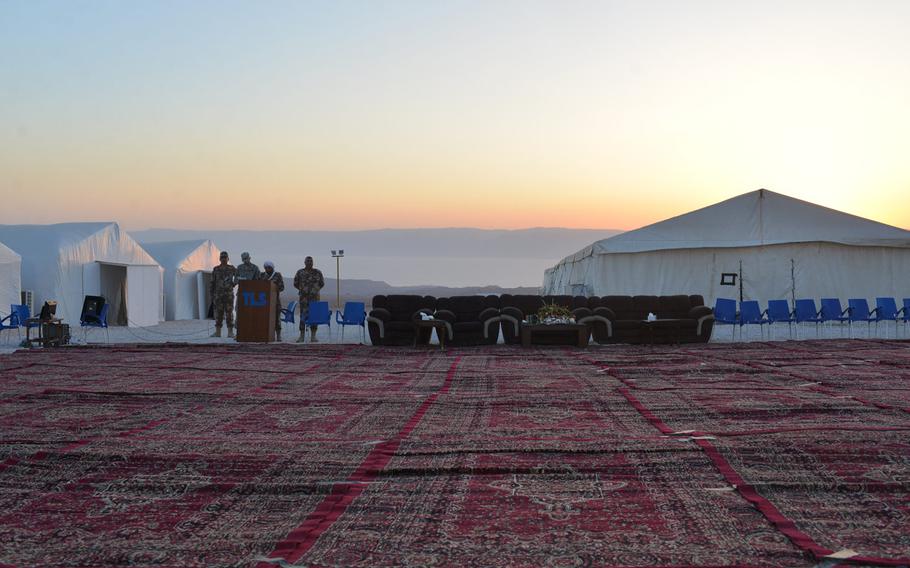 A dance floor of carpets awaits the night's festivities at Camp Titin, Jordan, as the sun sets over the nearby Red Sea on May 16, 2015. Jordanian armed forces hosted the banquet for their Marine counterparts as the annual exercise Eager Lion neared an end. (Steven Beardsley/Stars and Stripes) 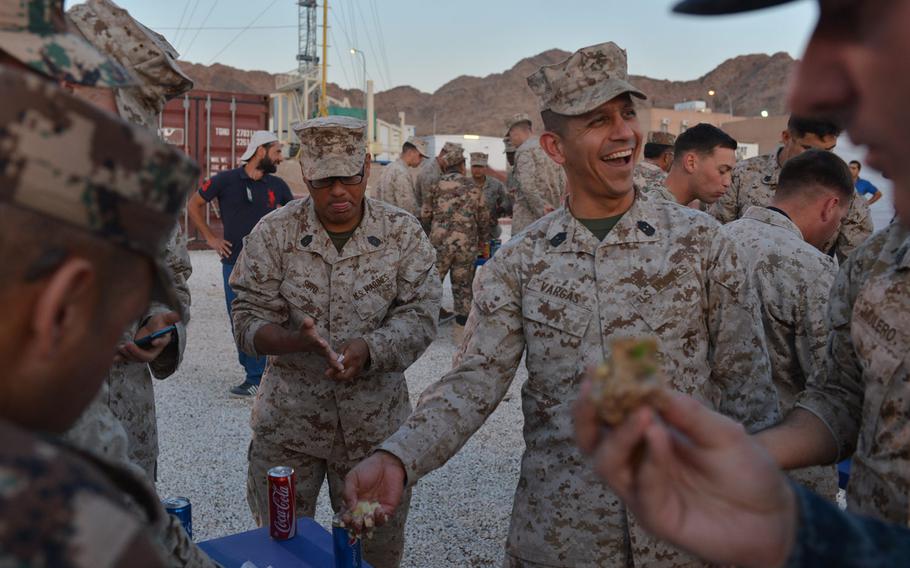 Marine Master Gunnery Sgt. Celestino Vargas takes a handful of food during a banquet thrown by Jordanian forces at Camp Titin, Jordan, on May 16, 2015. The event celebrated the end of the annual exercise Eager Lion. (Steven Beardsley/Stars and Stripes) 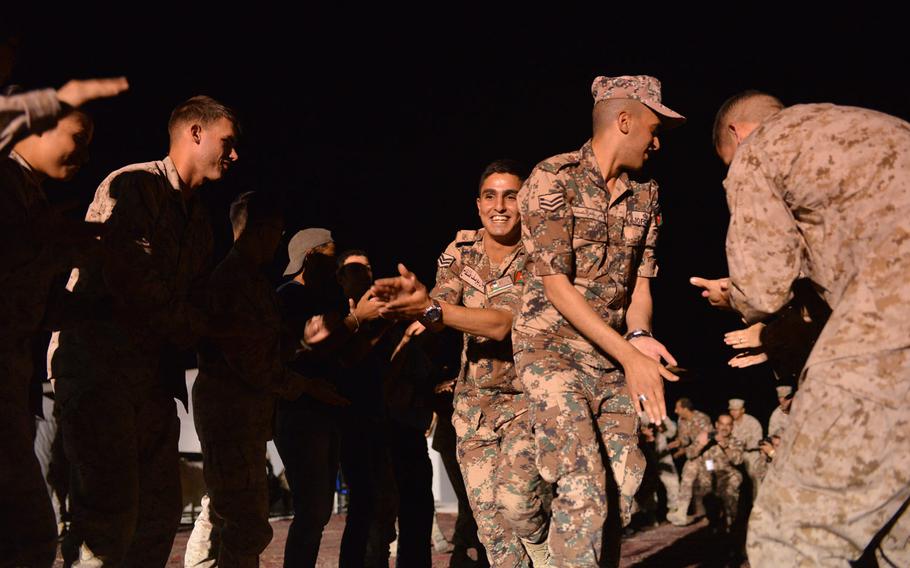 Marines join members of Jordan's armed forces during a dance as part of a celebration at Camp Titin, Jordan, marking the end of the exercise Eager Lion in 2015, which is held annually across the desert kingdom. (Steven Beardsley/Stars and Stripes) 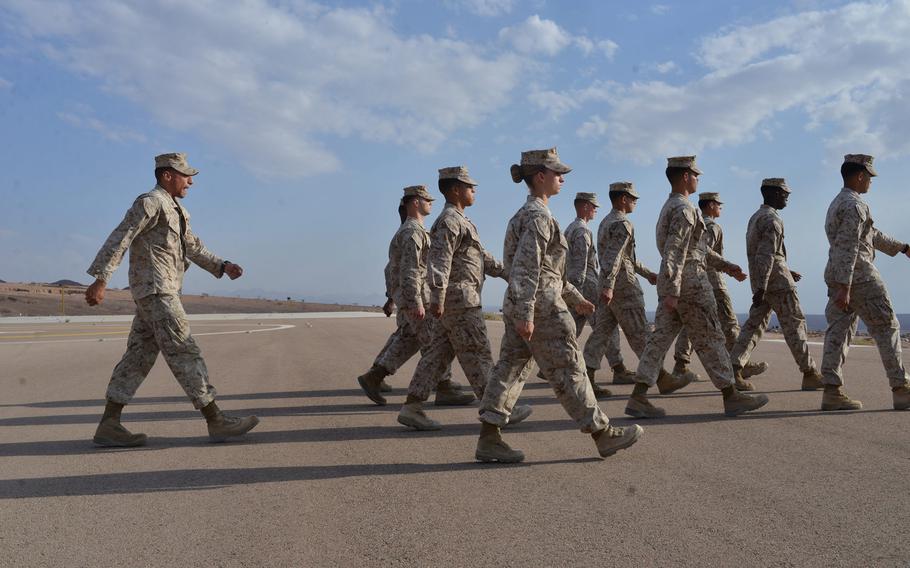 Marines at Camp Titin, Jordan, practice close-order drilling on May 14, 2015, as part of non-commissioned officer development during the annual exercise Eager Lion. (Steven Beardsley/Stars and Stripes) 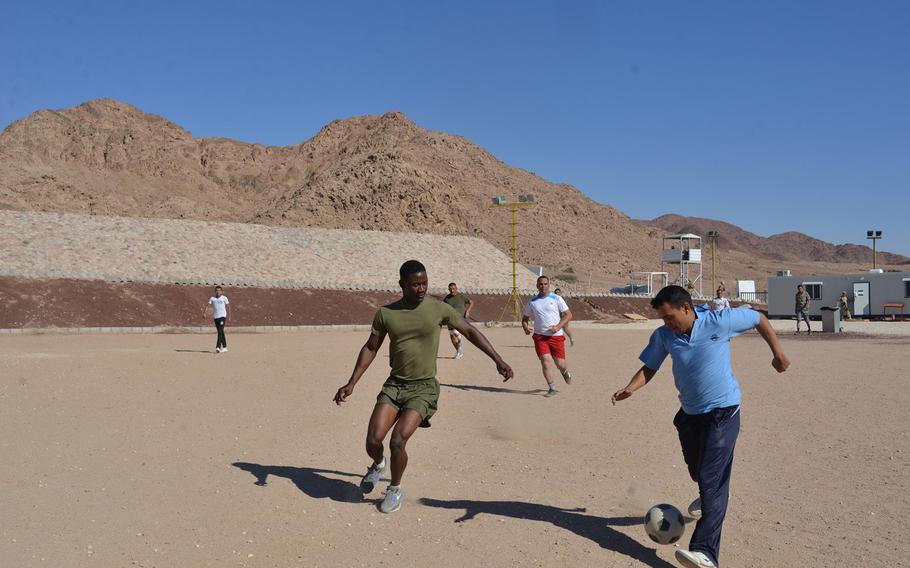 Marine Cpl. Fritz Vieux squares up with a member of the Jordanian armed forces during a soccer match at Camp Titin, Jordan, on May 15, 2015, one of the events surrounding the annual Eager Lion exercise. (Steven Beardsley/Stars and Stripes) 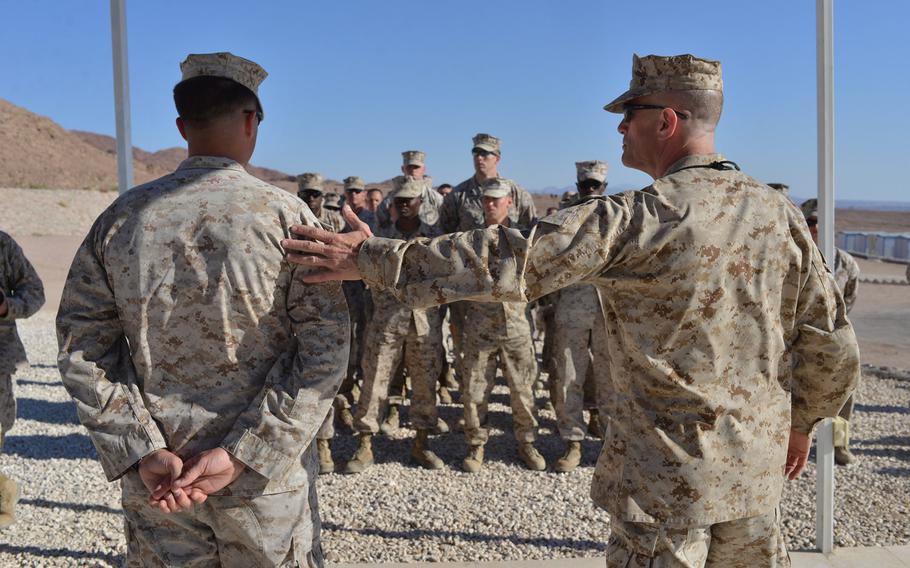 Marine Maj. Gen. Burke Whitman, right, speaks before presenting Sgt. Curtis Pannier with a bachelor's degree on May 15, 2015, at Camp Titin, Jordan. Pannier, a logistics chief, completed a program in logistics over several years through online courses with American Military University. Pannier and other Marines were in Jordan for the annual exercise Eager Lion. (Steven Beardsley/Stars and Stripes) 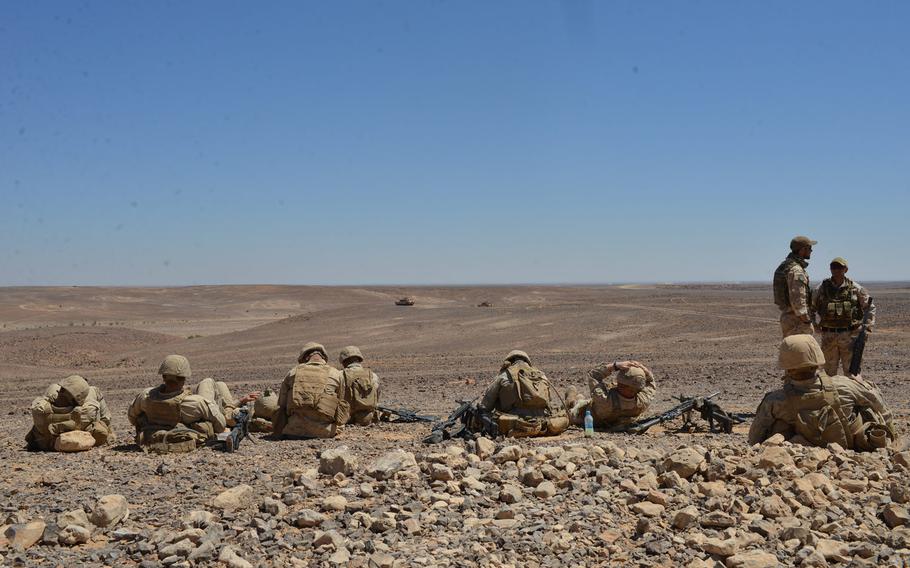 Marines take a break at the Wadi Shadiyah training range in Jordan on May 16, 2015, as part of the exercise Eager Lion. (Steven Beardsley/Stars and Stripes)

CAMP TITIN, Jordan — Rows of gleaming white tents stood ready for Marines at this small camp in southern Jordan last month, yet few troops were to be found inside.

Many were instead embarked on ships off the coast of Yemen, one of several real-world operations that threatened planning for the annual U.S.-Jordanian exercise run from the camp. With Marines and sailors involved across the Middle East, exercise leaders were forced to make last-minute changes to continue what has become one of the more significant exercises in the region.

“The fact that we’re so busy almost made it even more important to carry it out,” said Marine Maj. Gen. Burke Whitman, one of the exercise leaders.

Dubbed Eager Lion, the 5-year old exercise has become a venue for military cooperation between the U.S. and Jordan, a close ally that borders both Syria and Iraq. As threats have grown in those states, including the Syrian civil war and the expansion of the Islamic State group across territory in both countries, Washington has used Eager Lion as a signal of support for the vulnerable kingdom.

The exercise offers benefits to Marine and Navy commanders, as well, giving them a setting to bring together task forces otherwise separated across the region. They include a 2,200-strong Marine Expeditionary Unit embarked aboard a group of amphibious ships, a similarly sized Marine rapid-response force created last year in Kuwait and detached to several countries and a Navy expeditionary task force with explosive ordnance disposal, Riverines and Seabees.

Under the exercise scenario, Marine and naval forces were to land on a friendly beach and coordinate with local forces in response to an aggressive neighbor. The focus, said Whitman, was Marine-Navy integration for large operations, something he and other Marines say has been on the on the backburner during years of U.S. deployments to Iraq and Afghanistan.

“We’ve been doing it,” Whitman, a reservist, said. “But large parts of the Marine Corps were busy with the land campaign.”

Yet as the exercise neared, the impact of real-world events began to be felt. Operations against the Islamic State group were occupying Marine units. Tensions in the Persian Gulf over Iran’s seizure of a merchant vessel put Navy units there on alert. Saudi Arabian airstrikes against Iranian-backed Houthi rebels in Yemen demanded additional American attention.

The Marine officer scheduled to lead the amphibious forces, Maj. Gen. Carl E. Mundy III, the forward commander of Marine forces in the Middle East, had to stay in Saudi Arabia to work with military officials there. The amphibious ships expected to participate, part of the Iwo Jima group, were instead kept at sea for possible operations related to Yemen.

Their aviation squadrons, and the embarked Marines with the MEU, were mostly kept at sea, as well, forcing parts of the Eager Lion exercise to be scrapped or improvised. Planners brought in Whitman, the deputy commanding general for mobilization for II Marine Expeditionary Forces, as a last-minute replacement for Mundy. They cut out the role of the surface fleet in the exercise. A last-minute call to the 2nd Battalion, 2nd Marine Regiment, from Camp Lejeune, N.C., ensured some of the MEU forces were replaced.

Even some commands participating in the exercise continued keeping tabs on actual missions elsewhere. Navy Capt. Jeffrey McCauley, whose task force of EOD, Riverines and Seabees out of Bahrain were were plugged into the exercise, also was eyeing his sailors’ missions in the Persian Gulf.He had an EOD detachment in Irbil, Iraq, meanwhile, and other sailors in Saudi Arabia.

“I have to focus on the real world,” said McCauley. “That is where we need to make sure we’re not missing anything so we can complete the mission.”

The exercise went on. Elements of the rapid response force were able to participate. Replacements for part of the MEU group plugged in with few problems. Jordanian armed forces participated in each event, practicing their coordination with American counterparts. And at the end of the exercise, a massive display of American firepower — including bombings from a pair of B-52 bombers that flew 35 hours roundtrip from the U.S. — was hosted for Jordanian dignitaries at a nearby training range.

The intended message was clear: Even when occupied elsewhere, the U.S. will be there when it matters most.