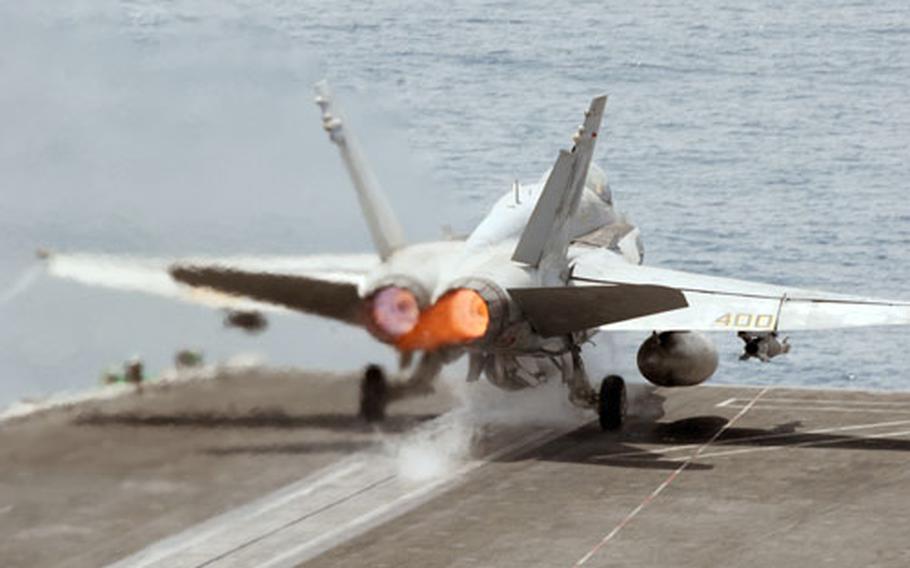 An F/A-18C Hornet, assigned to Strike Fighter Squadron (VFA) 258, launches from the catapult of the USS Ronald Reagan. The Reagan has assumed operations in the Middle East from the USS Abraham Lincoln. (Chelsea Kennedy/Courtesy of the U.S. Navy)

The aircraft carrier USS Ronald Reagan and its strike group has relieved the USS Abraham Lincoln strike group as the main sea presence in the Middle East, according to a Navy news release.

Aboard the carrier are aircraft from Carrier Air Wing 14. Squadrons include the "Redcocks" of Strike Fighter Squadron 22, the "Fist of the Fleet" of VFA-25, the "Stingers" of VFA-113, the "Eagles" of VFA-115, the "Black Eagles" of Airborne Early Warning Squadron 113, the "Cougars" of Tactical Electronic Warfare Squadron 139, and the "Black Knights" of Helicopter Anti-Submarine Squadron 4.

The Abraham Lincoln had been operating in the U.S. 5th Fleet area of operations since April. The area includes the Arabian Gulf, Arabian Sea, Gulf of Oman and Gulf of Aden.