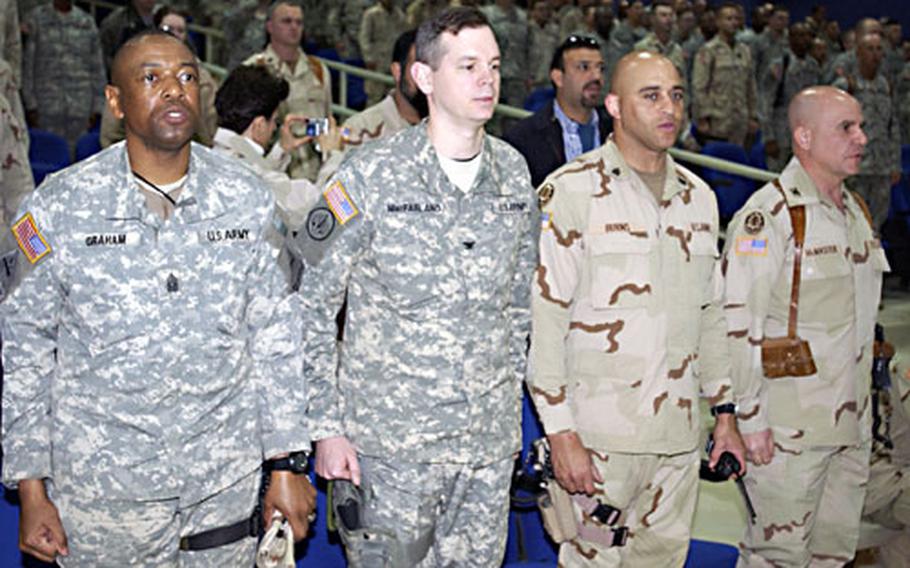 Soldiers of the Friedberg, Germany-based 1st Brigade Combat Team, 1st Armored Division have taken responsibility for an area of northwestern Iraq that includes the flash point city of Tal Afar, which witnessed one of the largest and most successful U.S. military operations in 2005.

The &#8220;Ready First,&#8221; as the brigade is known, is relieving the 3rd Armored Cavalry Regiment, which led Operation Restore Rights last fall in Tal Afar.

In a ceremony earlier this week, the 1st Brigade commander, Col. Sean MacFarland and Command Sgt. Maj. Frank Graham uncased the brigade&#8217;s colors and formally began the unit&#8217;s second yearlong stint in Iraq. In 2003, the brigade was deployed to Baghdad and tasked with providing security in the aftermath of the invasion.

This time around, the brigade&#8217;s mission is &#8220;to assist the Iraqi Security Forces in preserving the democratically elected government and ensure the safety of the Iraqi people,&#8221; according to a U.S. military news release.

For its part, the 3rd Armored Cavalry, known as the &#8220;Brave Rifles,&#8221; will begin making its way back to Fort Carson, Colo. This also was the second tour in Iraq for the 3rd ACR, which took part in the 2003 invasion.

As part of its send-off from Iraq, the mayor of Tal Afar praised the unit in a letter sent to Gen. George Casey, the top U.S. commander in Iraq. In part, the letter called the 3rd ACR soldiers &#8220;lion hearts&#8221; who &#8220;bristle with the confidence of knights in a bygone era,&#8221; several news outlets reported.

The letter, from Mayor Najim Abdullah Abid al-Jibouri, has been circulating among the 3rd ACR&#8217;s troops and their families back home. Special tribute was paid to the 3rd ACR soldiers killed in the battle to retake Tal Afar from insurgents.

Regimental Commander Col. H.R. McMaster told the New York Post in an e-mail from Iraq, &#8220;[The letter] is a moving tribute to our courageous, disciplined, tough and compassionate troopers. &#8230; I think it is easy for people to understand the sacrifices that come with military service, but more difficult to understand the intangible rewards.&#8221;

Al-Jibouri is a Sunni Arab and a former officer in Saddam Hussein&#8217;s military who was recently brought to the area from another part of the country by the new Iraqi government.

Over the summer and fall, he worked side by side with McMaster on Operation Restore Rights, a military campaign that targeted Abu Musab al-Zarqawi&#8217;s al-Qaeda in Iraq.

The group used the city of 250,000, located 40 miles from the Syrian border, as its epicenter for smuggling money, material and suicide bombers.