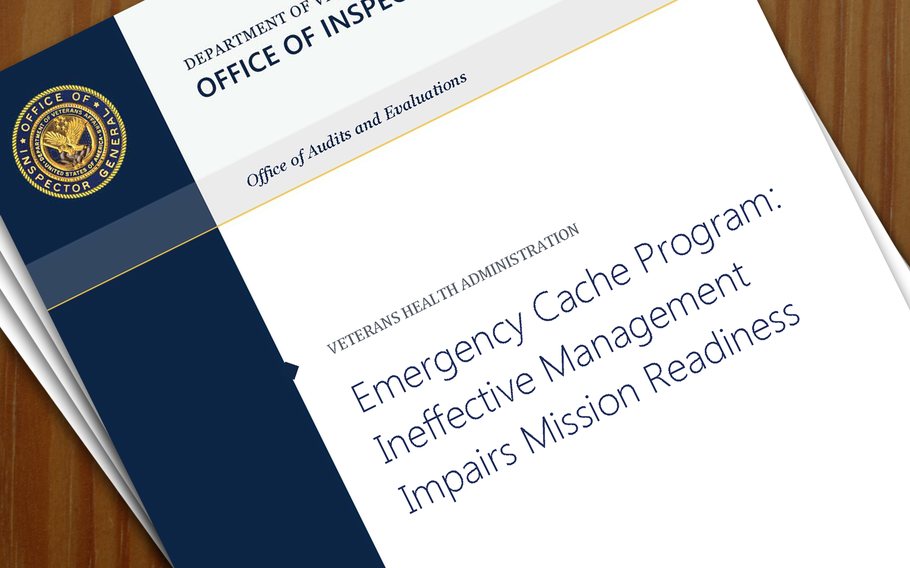 WASHINGTON — It’s uncertain whether a Department of Veterans Affairs stockpile of drugs and medical supplies — intended to be used in a crisis — is equipped to handle future terrorist attacks or biological or natural disasters, according to a report released Wednesday by the VA Office of Inspector General.

After the 9/11 terrorist attacks, the VA created a stockpile that could be used to treat veterans, VA employees and others in case of another mass casualty incident. Through what’s called the Emergency Cache Program, drugs and medical supplies, valued at about $44 million, are stored in stockpiles at 141 VA hospitals across the country.

IG staff inspected 26 stockpiles in February and found expired and missing drugs. The department is also skipping some of its annual inspections and activation drills, inspectors reported.

“[The VA] has not been effectively managing its Emergency Cache Program, and [officials] gave no assurances the cache is ready to mobilize in the event of an emergency,” the report reads.

The report also states the department “risks not having the drugs necessary” in an emergency and “will not be equipped as intended” unless the VA improves oversight and accountability.

All of the 26 stockpiles that were inspected had at least four types of expired drugs. Of the 650 types of drugs reviewed, 178 – or 27 percent – were expired.

“Based on the sample results, the team estimates about 6.1 million units of drugs were expired across all 141 caches, representing about $4.6 million in present-day value,” the report states. “These expired drugs affected the readiness of VA’s emergency caches.”

Many of the expired drugs were amoxicillin and ampicillin, which are used to treat bacterial infections – including conditions related to anthrax. Morphine, a painkiller, as well as drugs to treat the flu and high blood pressure, also tended to be expired more than other medications.

Managers of 96 stockpiles were able to prove with documentation that they had inspected their supply sometime during the 2017 fiscal year. The rest said they hadn’t inspected the stockpiles, didn’t know if they’d been inspected, or couldn’t provide proof.

Staff for 21 of the stockpiles, or 15 percent, didn’t conduct mandatory drills, inspectors found.

The IG made seven recommendations, including asking the VA to enforce stricter oversight of the stockpiles and rotate medications so they don’t expire.

In response to the report, Richard Stone, the executive in charge of the Veterans Health Administration, said he agreed with the findings and would implement the recommendations by September 2019.

“We agree with their findings and will make necessary changes to strengthen our Emergency Cache Program,” Stone wrote. “We take emergency preparedness seriously and will ensure that the Emergency Cache contains the necessary supplies and medication to care for Veterans during a national emergency, terrorist attack or natural disaster.”