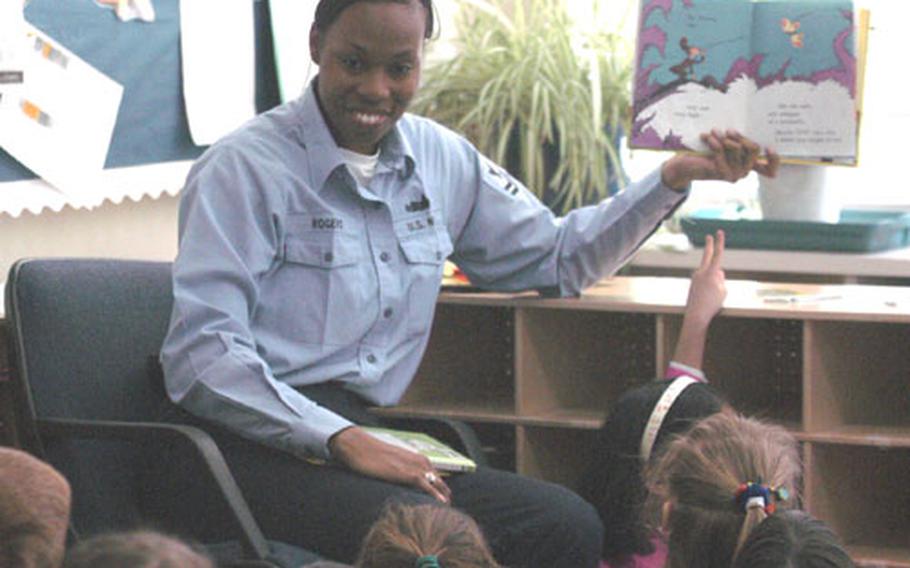 Guest reader Petty Officer Savanna Roberts reads "Mr Brown Can Moo. Can You?" to a 2nd grade class at Shirley Lanham Elementary School. Servicemembers are helping the school celebrate the birthday of Dr. Seuss during a National Education Association&#39;s Read Across America campaign to teach children that reading is fun and important. (Jim Schulz / S&S)

Guest reader Petty Officer Savanna Roberts reads "Mr Brown Can Moo. Can You?" to a 2nd grade class at Shirley Lanham Elementary School. Servicemembers are helping the school celebrate the birthday of Dr. Seuss during a National Education Association&#39;s Read Across America campaign to teach children that reading is fun and important. (Jim Schulz / S&S) 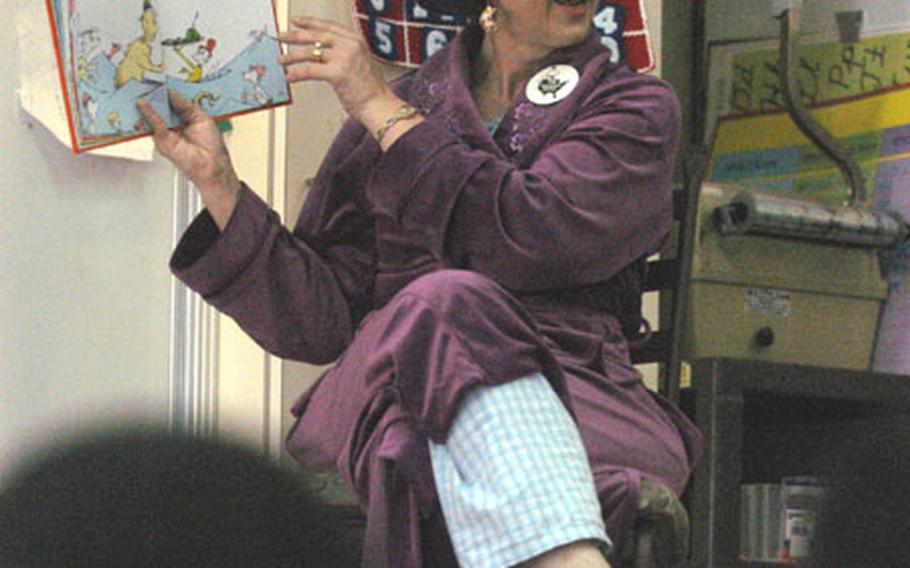 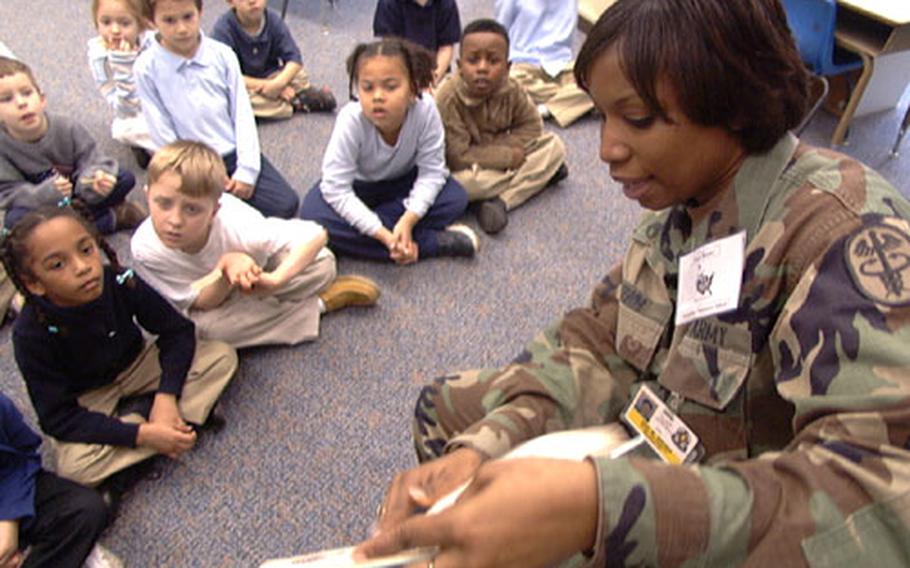 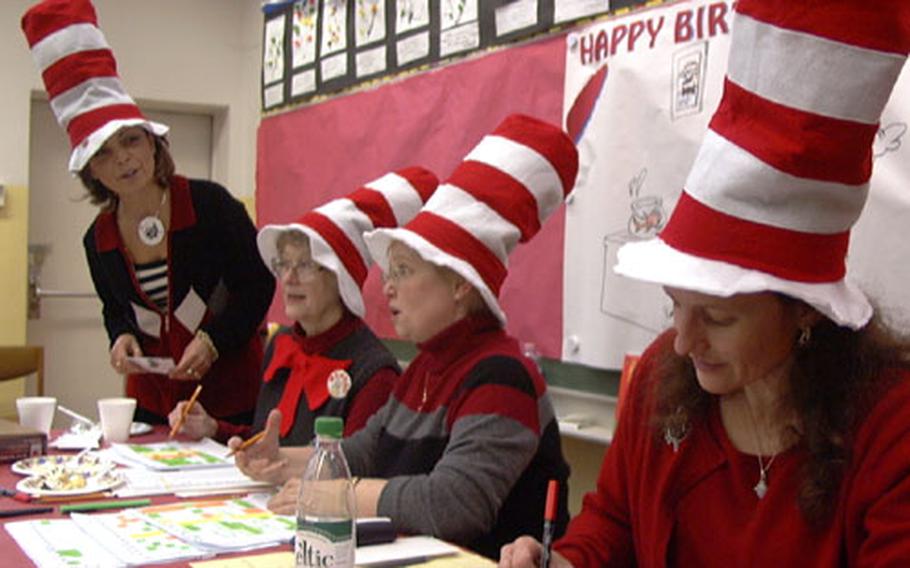 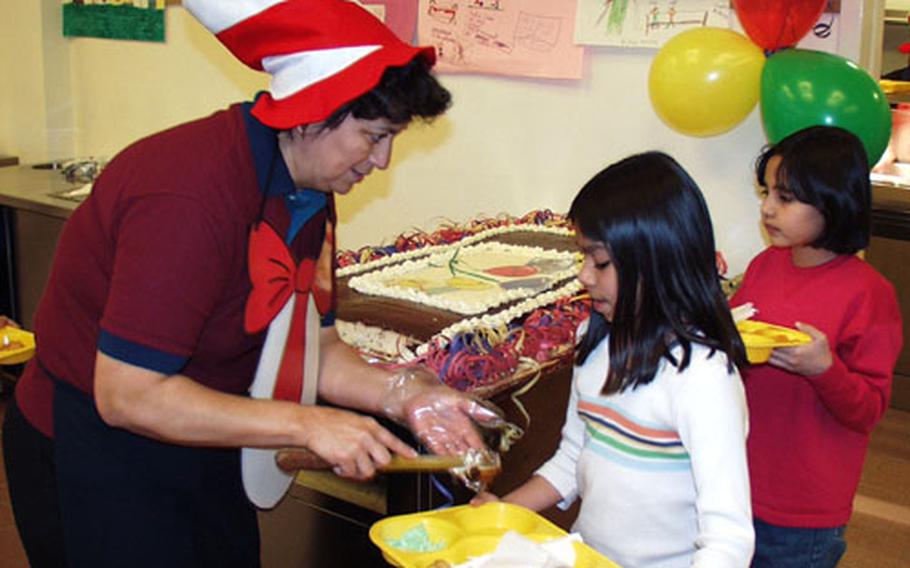 Lee, who proudly announced he was 6 going on 7, knew the book well.

Lee was among thousands of students in U.S. schools across Europe taking part in Read Across America on Monday.

With the help of guest readers, students dove into classic children&#8217;s literature &#8212; including works by Dr. Seuss. The National Education Association&#8217;s annual project coincides with the March 2 birthday of the late Theodore Geisel &#8212; better known as Dr. Seuss &#8212; which this year fell on Sunday. In the States and at many military communities overseas, schools celebrated Monday.

As Brown, an optometry technician at Benjamin Franklin Village health center in Mannheim, flipped through the pages, the children popped their hands in the air with questions.

&#8220;Little things like this are among the easiest things you can do to help children read.&#8221;

Brown skipped her lunch hour, hoping to read to her daughter Morgan&#8217;s third-grade class &#8212; which was at the cafeteria when she arrived at Mannheim Elementary School. So she read to a first-grade class instead.

More than 100 community volunteers turned out, said Barbara Moring, who helped organize the third, annual Mannheim event with a team of reading specialists and the local parent-teacher association.

Many readers were parents like Staff Sgt. Luis Young, 47, a trucker with the 68th Transportation Company at Coleman Barracks. His unit was scheduled to deploy this past weekend.

In Giessen, National Honor Society students from the high school read Dr. Seuss books to elementary school kids in the library and classroom.

At Aviano Air Base in Italy, students got to have green eggs and ham as part of their lunches. It took about a half-cup of food coloring to give the eggs a distinctive greenish color.

That caused some kids to pause, but not second-grader J.D. Green. Since his classmates on either side weren&#8217;t into green eggs, he downed a couple of portions.

Most kids did eat them, however. &#8220;I do like green eggs and ham,&#8221; was a frequent quote heard from those standing in line waiting for their food from servers dressed like the Cat in the Hat.

And there were two large birthday cakes for dessert. Yolanda Gifford, a food service worker, said she spent three days making one of them.

Kids also engaged in a variety of activities in their classrooms with reading and Dr. Seuss predominant themes.

On Friday in Naples, Italy, pupils in Maribeth Hail&#8217;s first-grade class made their own green eggs and ham to the delight of some and the disgust of others.

Other students, including 6-year-old Carolyn Walker, were quick to give the scrambled eggs and ham recipe a thumbs-up.

Events also took place in Kitzingen, Garmisch and Vilseck, all in Germany, according to school staff who wrote into the National Education Association&#8217;s Web site. On Wednesday afternoon, Brig. Gen. Erwin F. Lessel, the 86th Airlift Wing commander, is scheduled to read to the children at Ramstein Elementary, base officials said.

&#8212; Reporters Kent Harris and Leah Bower contributed to this report.