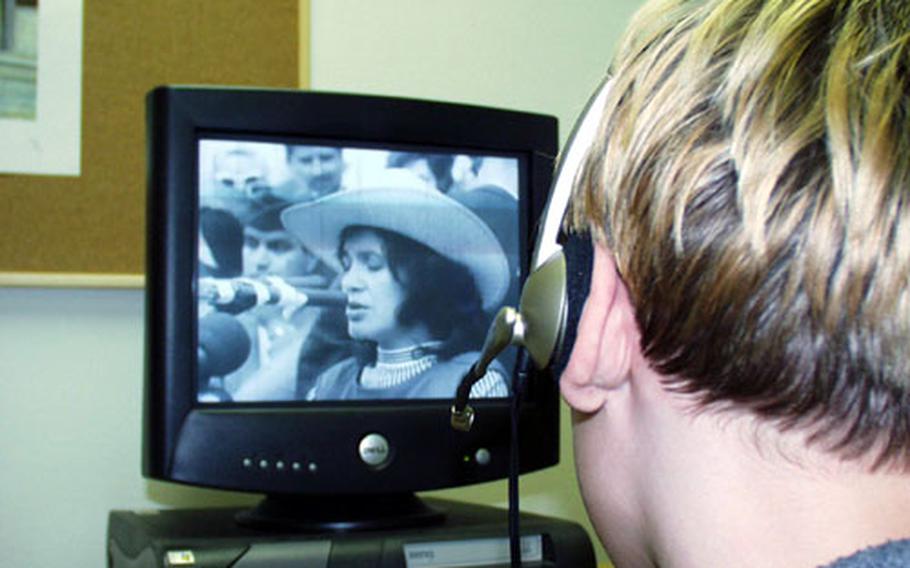 Before they read about a subject on a computer, students watch a film. Educators say the films help give the students a better idea of what they&#39;ll be reading, allowing them to understand it more easily. (Kent Harris / S&S)

Before they read about a subject on a computer, students watch a film. Educators say the films help give the students a better idea of what they&#39;ll be reading, allowing them to understand it more easily. (Kent Harris / S&S) 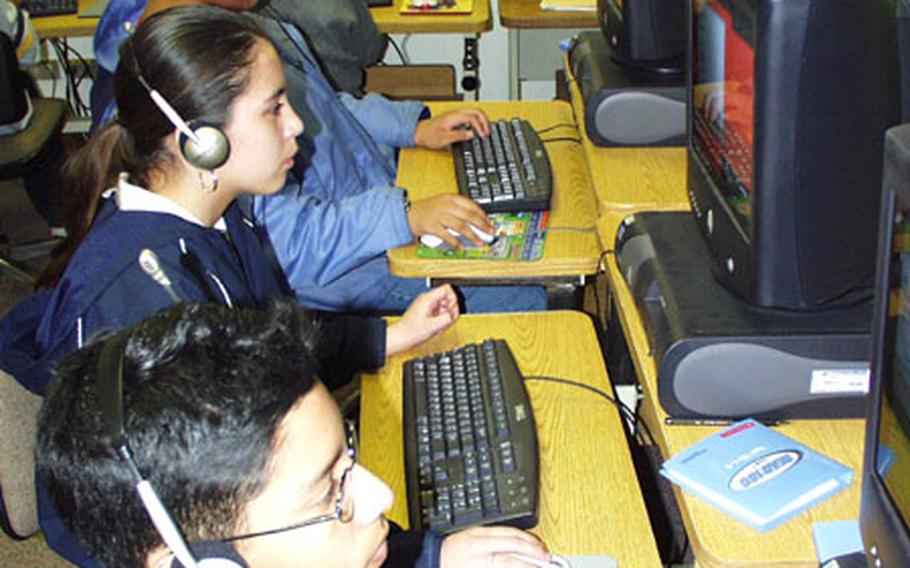 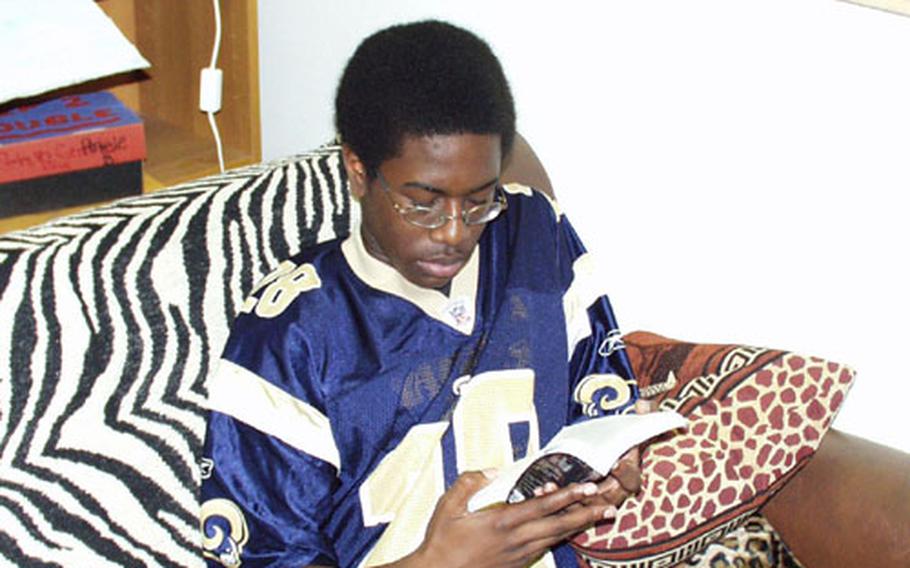 Jake Dixon, an eighth-grader at Vicenza, reads a book on his own during one of the three rotations in Teresa Taylor&#39;s class at the school. (Kent Harris / S&S) 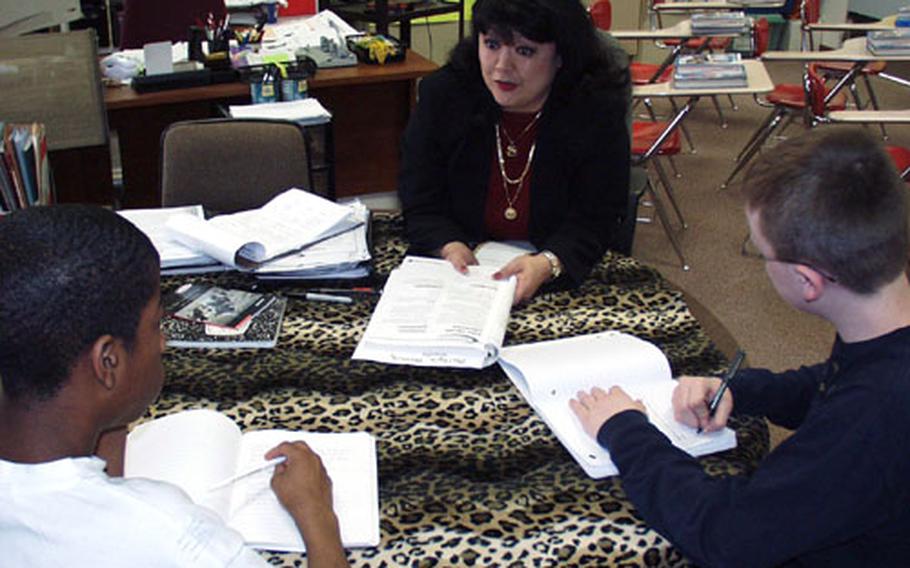 Teacher Teresa Taylor talks with Darian Battle, left, and Josh McCarty during a session designed to help them in a few areas they need work on. Through Read 180 software, Taylor can monitor each of her students&#39; efforts and see where they&#39;re excelling and where they&#39;re having problems. (Kent Harris / S&S)

VICENZA, Italy &#8212; Teresa Taylor was so excited about the new reading program used by the Department of Defense Dependents Schools that she decided to become a full-time teacher again.

&#8220;I decided I would go back into the classroom, because I wanted to teach this,&#8221; said Taylor, who switched from being an administrator to a teacher at Vicenza who can&#8217;t say enough positive things about Scholastic&#8217;s Read 180.

&#8220;If I had my way, every school would have it,&#8221; said Peggy Hoffman-Schmidt, the English language arts liaison for the Kaiserslautern district.

&#8220;It&#8217;s one of the initiatives that seems to be welcomed by everyone involved,&#8221; said Diane Yoesting, who holds the same position in the Heidelberg district.

Using a combination of computers, audio tapes, individual instruction and popular books &#8212; all geared for specific reading levels &#8212; the program provides the elements that those struggling need to succeed.

Though DODDS students traditionally score well on reading tests, there are always those who &#8212; for whatever reason &#8212; can&#8217;t keep up with their classmates.

&#8220;Through elementary school, we teach them how to read,&#8221; said Taylor, who spent decades in the classroom before becoming a language specialist. &#8220;But there are always those kids who get passed.&#8221;

In middle school and high school, the focus moves to comprehension and analysis. For those who still haven&#8217;t mastered reading, &#8220;you know no comprehension is taking place,&#8221; she said.

Because of a special grant from Congress, all high schools in the Department of Defense Education Activity &#8212; DODDS&#8217; parent organization &#8212; are offering the program this year. It&#8217;s part of a program objective memorandum that has added additional personnel and equipment into high schools for the next five years.

Some programs focus on special education. Some on mathematics. But in a year during which the school system is carrying the theme, &#8220;DODEA Reads,&#8221; Read 180 is attracting a lot of attention.

Brochures list several years of research and development before it was introduced in the late 1990s. Taylor first saw it demonstrated at a seminar in 1998.

Classrooms in Europe generally use an approach that divides the class time into three segments: working with a computer; reading alone; and working in small groups directed by a teacher.

The most popular with students is probably the computer section.

Students watch a film about a particular subject, then read about the same subject. Teachers say this part is extremely important, because young readers often struggle with material they&#8217;re not familiar with. Seeing and hearing it first gives them something to grasp onto.

Students then go through a series of drills on context, spelling and general comprehension. They have to successfully complete the entire section of material before moving on to the next one.

A second segment has students reading books on their own. Many are culled from what&#8217;s popular in the bookstores. Students can either read by themselves or read along with an audio tape that goes line by line.

In the third segment, teachers such as Taylor talk with students in small groups of individually, working on areas where students are struggling.

Taylor said she knows where her students need work, because she can track their computer exercises through her terminal. Taylor has adapted the program to teach some at the middle school as well.

DODEA has recently negotiated with the company to get enough licenses to make Read 180 available at all middle schools for the next school year.

Teachers say the quicker that students take to reading, the better it is.

A quote from Joseph Tafoya, the director of DODEA, posted in the hallway outside Taylor&#8217;s classroom sums it up: &#8220;Reading is critical to student success in every subject they will ever study in school, but maybe more significantly to them, the better they read, the more accessible the world becomes to them.&#8221;