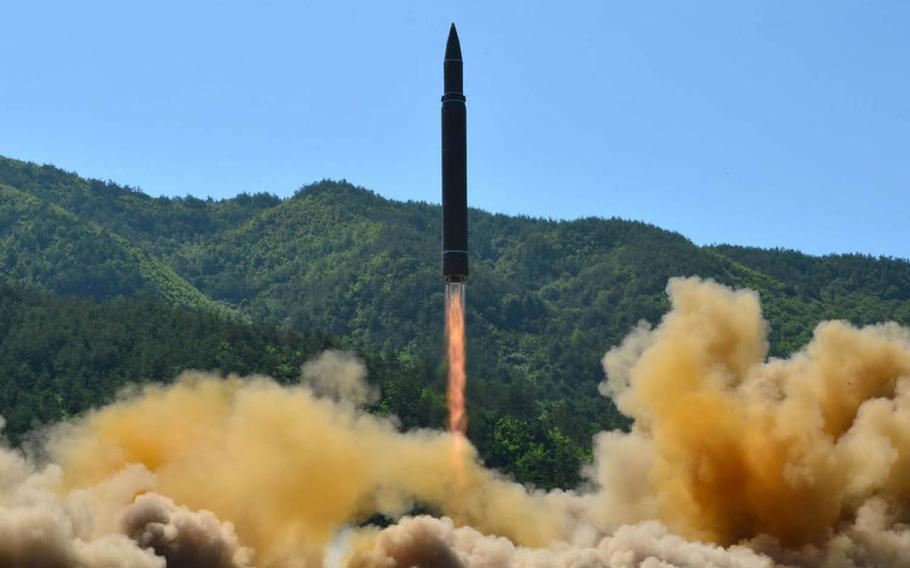 A missile lifts off in this undated photo released this week by the Korean Central News Agency. (Courtesy of KCNA)

SEOUL, South Korea — The U.S. administration warned it’s prepared to use military force if necessary after North Korea ratcheted up tensions this week by test-firing a missile that may be capable of hitting Alaska.

South Korean President Moon Jae-in, meanwhile, called for tougher sanctions and pressure against the North but continued to press for dialogue and engagement with the communist state.

The successful launch of an intercontinental ballistic missile on Tuesday has prompted calls for urgency in dealing with the growing threat from North Korea but also exposed the lack of good options to try to stop it.

Nikki Haley, the U.S. ambassador to the United Nations, called the ICBM test a “clear and sharp military escalation.”

“Their actions are quickly closing off the possibility of a diplomatic solution,” she said Wednesday during an emergency meeting of the U.N. Security Council. “One of our capabilities lies with our considerable military forces. We will use them if we must, but we prefer not to have to go in that direction.”

The United States maintains 28,500 servicemembers in South Korea and 50,000 in Japan. The military also has deployed numerous warships to the region and sent supersonic bombers soaring over the divided peninsula following previous provocations.

To underscore its strength, the Army fired its own missiles into the sea off South Korea’s coast in a live-fire drill a day after North Korea’s launch.

But experts note that military conflict would be catastrophic for all sides, leaving them locked in an uneasy stalemate that has existed since the 1950-53 Korean War ended with an armistice instead of a peace treaty.

“Bombing North Korea has always been a hugely risky option,” Robert Kelly, an associate professor of international relations at South Korea’s Pusan National University, wrote in The National Interest magazine.“This pushes the likely response back to what it [has] always been, the much-derided ‘strategic patience.’”

President Donald Trump has insisted his predecessor’s policy known as “strategic patience” is over and promised a new approach to North Korea including a threat of possible unilateral action.

But his administration’s pursuit of “maximum pressure and engagement” has many similarities with its emphasis on punishing economic sanctions that so far have failed to curb North Korea’s nuclear ambitions.

Trump also has been disappointed in his hopes that China would use its economic influence to curb the nuclear ambitions of its isolated communist ally in exchange for favorable trade agreements.

Haley told the Security Council that the U.S. will put forward a new resolution in coming days that “raises the international response in a way that is proportionate to North Korea’s escalation.”

The former South Carolina governor also warned countries not to try to water down the punitive measures. Russia and China have urged restraint and dialogue in responding to the ICBM test.

“There are countries that are allowing, even encouraging, trade with North Korea in violation of UN Security Council resolutions,” Haley said. “Such countries would also like to continue their trade arrangements with the United States. That’s not going to happen.

“Much of the burden of enforcing U.N. sanctions rests with China,” she said. “We will work with China ... but we will not repeat the inadequate approaches of the past that have brought us to this dark day.”

The Trump administration also has been pressing other Southeast Asian nations to stop enabling the use of North Korean workers, which is a major source of hard currency for the regime despite criticism by human rights groups that it amounts to slave labor.

North Korea watchers say the regime’s main goal is perpetuating the Kim family dynasty that has ruled the country since it was formed in 1948, and its nuclear weapons program is aimed at ensuring there’s no effort to oust the leadership.

Kim Jong Un, who took over after his father died of a heart attack in 2011, has stepped up efforts to develop a nuclear-tipped missile that could target the U.S. mainland. The country has recently conducted an unprecedented number of missile tests and it carried out two of five underground nuclear tests last year.

North Korea also has a vast array of conventional weapons and forces poised near the heavily militarized border to threaten South Korea, Japan and U.S. bases in the region.

U.S. Secretary of State Rex Tillerson said earlier this year that Washington does not seek regime change or an invasion in what analysts saw as an indication the Trump administration could be leaning toward a more diplomatic approach.

But the administration insists all options, including military action, are on the table.

Hopes for a return to some form of dialogue after six-party talks stalled in 2009 have been raised by South Korea’s new liberal president and comments by Trump who has said he would be “honored” to meet with Kim under the right conditions.

Moon’s government already has opened the door for new engagement, giving long-denied permission to humanitarian groups to operate in North Korea. But the North has so far rebuffed the efforts and conducted six missile tests since Moon took office on May 10.

Pyongyang also reiterated it will never agree to give up its weapons, which it insists are for self-defense, in exchange for negotiations. North Korea has used talks in the past to wrest aid and concessions from the West.

State-run media reported that while celebrating the successful launch, Kim “stressed that [North Korea] would neither put its nukes and ballistic rockets on the table of negotiations in any case … unless the U.S. hostile policy and nuclear threat to [North Korea] are definitely terminated.”

Moon, who is in Germany for this weekend’s Group of 20 summit, persisted.

“We can never allow a war on the Korean Peninsula ever again,” he said in a meeting with Germany’s president, according to his office.

“And that is the reason we must seek to resolve the issue through dialogue and peaceful means, though it is imperative that the international community further increase the pressure and impose strong sanctions,” he added.