Reaching Iraqis through their own channels 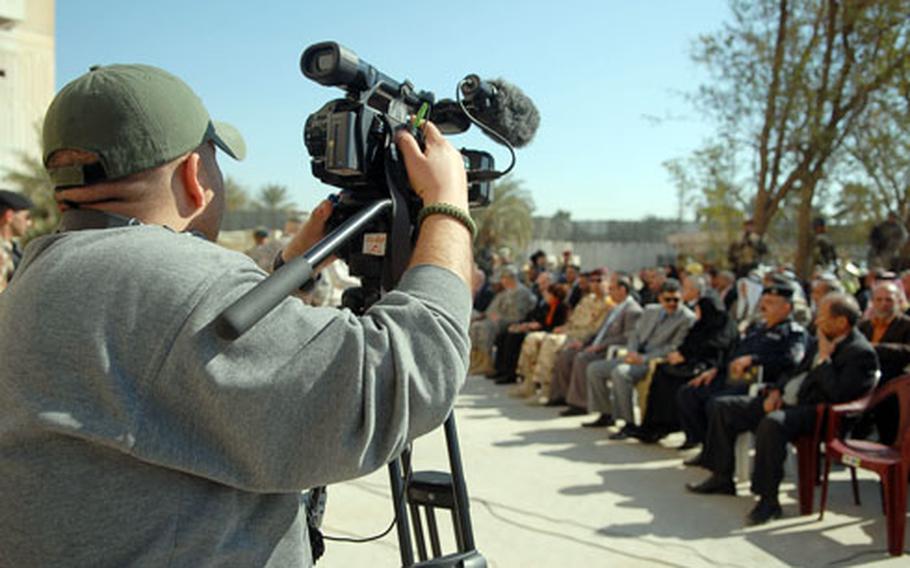 Ali Hassham, a cameraman with Al-Ayn Media, films a ceremony marking the transfer of an American base to Iraqi control Monday in Baghdad’s Adl neighborhood. American leaders are working with Arabic media to speak directly to the Iraqi people about their country’s growing sovereignty. (James Warden/S&S)

BAGHDAD &#8212; Col. Joseph Martin had an impressive audience when he stood up to speak Monday at a ceremony in Baghdad&#8217;s Adl neighborhood to mark the handover of an American base to the Iraqi government. Tribal leaders, local dignitaries and Iraqi generals quietly listened to what he had to say as he spoke about the importance of the transfer to the Iraqi people.

"It&#8217;s the peace and prosperity they well deserve, for it&#8217;s their great nation," the brigade commander said.

But Martin&#8217;s most important audience may have been those who would watch the ceremony later on TV. Earlier that morning, brigade public affairs staff picked up a handful of local reporters to ensure that cameras would transmit the moment into Iraqi homes.

As they begin reducing their presence in Iraq, American units are focusing their media efforts on Arabic organizations. The outreach is an effort to communicate directly to the Iraqi people that the ongoing transfer of responsibility to the Iraqi government is real.

U.S. forces have some selling to do if they want to win over the Iraqi people, said Diya al-Tahee, a reporter for Al-Iraqia, a large Iraqi TV station. Many still blame the Americans for the looting, violence and other chaos that erupted after the invasion, and some continue to suspect that the Americans plan to stay for good.

The brigade was quick to put this strategy into effect after it arrived in Iraq. Faulkner organized a media roundtable to allow nearly 30 journalists a chance to question brigade leaders about issues of the day Western media probably wouldn&#8217;t have covered. One man even asked about plans for his daughter&#8217;s school.

"These guys, they live here. They&#8217;ll ask questions that are specific, that hit home," Faulkner said.

Meanwhile, listening to local media also allowed leaders to steer their efforts toward the issues that really concern the Iraqi people.

Commanders pick up information responding to reporters&#8217; questions, while interpreters regularly monitor local news channels to find out what they are saying.

Over time, Faulkner and his crew gradually built relationships with the local reporters. Some became regulars who repeatedly came out to see what the Americans were doing.

Martin has found working with Iraqi journalists to be much the same as working with Western journalists, although the language barrier creates a more deliberate interview style. The similarities could be seen during Monday&#8217;s ceremony. Like journalists everywhere, the Iraqis stressed the American public affairs team by moving their cameras ever closer to the speakers and by interviewing sources when Faulkner wanted them elsewhere.

The Americans&#8217; strategy is not lost on the Iraqi reporters.

"Their main concern for us was to prove that the Iraqi government is working for Iraq now to accomplish their promises that they are taking control of the Americans," Tahee said.

With all the American media&#8217;s efforts, Tahee still thinks his viewers will judge American initiatives more by what happens than by how well they&#8217;re communicated &#8212; especially regarding plans to transfer responsibility back to the Iraqi government.

"They will put it to the test and wait six months and see if the Americans really leave," he said.

Yet that&#8217;s a test 2/1 HBCT leaders are convinced they&#8217;ll pass. By communicating with the Iraqi people through their own channels, they say, the Iraqis will see that the Americans genuinely want to help the country.

"Having relationships with the media here is important," Martin said. "They&#8217;re part of our partnership in letting the people of Iraq know what&#8217;s going on."