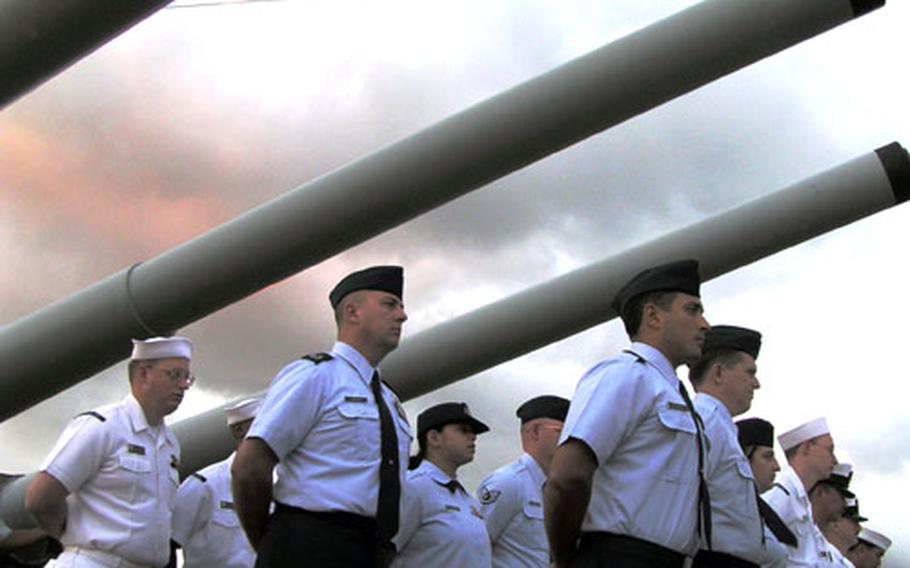 Exactly 60 years after the USS Missouri was launched from the Brooklyn Naval Shipyards, about 50 sailors, soldiers, airmen and Coast Guardsmen stood upon her deck in Pearl Harbor to reenlist and celebrate her birthday. (Courtesy of Keith DeMello)

Exactly 60 years after the USS Missouri was launched from the Brooklyn Naval Shipyards, about 50 sailors, soldiers, airmen and Coast Guardsmen stood upon its deck to re-enlist.

In a ceremony in Pearl Harbor, Hawaii, presided over by Pacific Commander Adm. Thomas Fargo, the servicemembers raised their hands as the sun rose and celebrated the day the giant battleship slid into the chilly waters of the East River to join the fleet and the ongoing Pacific war against Japan.

Nineteen months later, on Sept. 2, 1945, Gen. Douglas MacArthur and representatives of 10 nations assembled on the deck of the USS Missouri in Tokyo Bay to accept the Japanese surrender that ended World War II in the Pacific.

&#8220;The re-enlistment went as expected,&#8221; said Keith DeMello, spokesman for the USS Missouri Memorial Association. &#8220;Although it was a little rainy in the beginning, just like in 1944 the sun broke through the clouds as the ceremony began.&#8221;

As part of the ceremony, the troops recited the &#8220;Oath of Enlistment&#8221; beneath the Missouri&#8217;s trademark 16-inch guns. The memorial has been the site of re-enlistment ceremonies since it opened in 1999, DeMello said. &#8220;But rarely in numbers as great as this.&#8221; The memorial has hosted approximately 3,000 military reenlistments since opening, he said.

More than 360,000 visitors came aboard the Missouri in 2003. The nonprofit USS Missouri Memorial Association, its designated caretaker, expects to welcome the memorial&#8217;s two-millionth visitor in 2004.