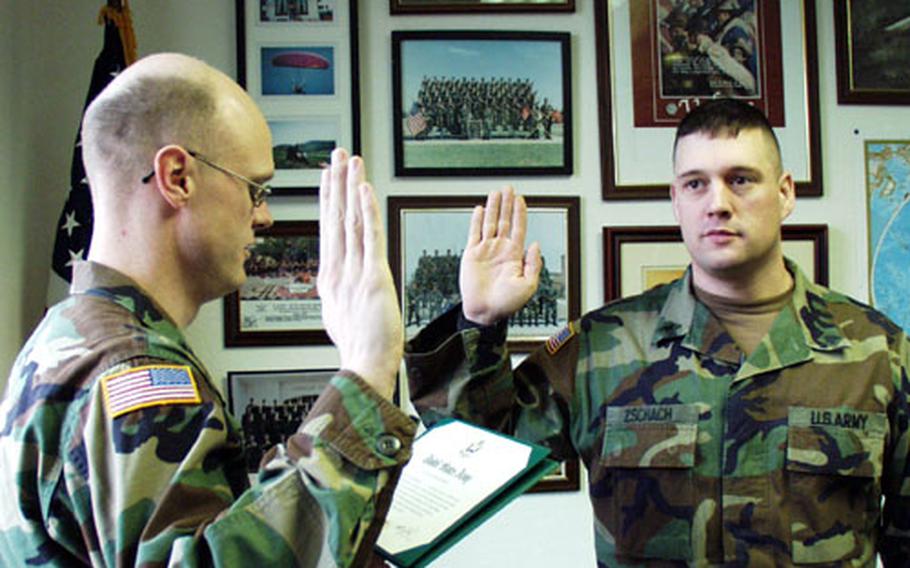 Sgt. Dean Zschach (right) of the 1st Infantry Division&#39;s headquarters company is re-enlisted by Capt. Robbin Halstead at Leighton Barracks in Würzburg, Germany. Zschach, 32, had to re-enlist for three years instead of two because of new "retention moderation" policies designed to combat recent overmanning in the Army. (Steve Liewer / S&S)

Sgt. Dean Zschach (right) of the 1st Infantry Division&#39;s headquarters company is re-enlisted by Capt. Robbin Halstead at Leighton Barracks in Würzburg, Germany. Zschach, 32, had to re-enlist for three years instead of two because of new "retention moderation" policies designed to combat recent overmanning in the Army. (Steve Liewer / S&S) 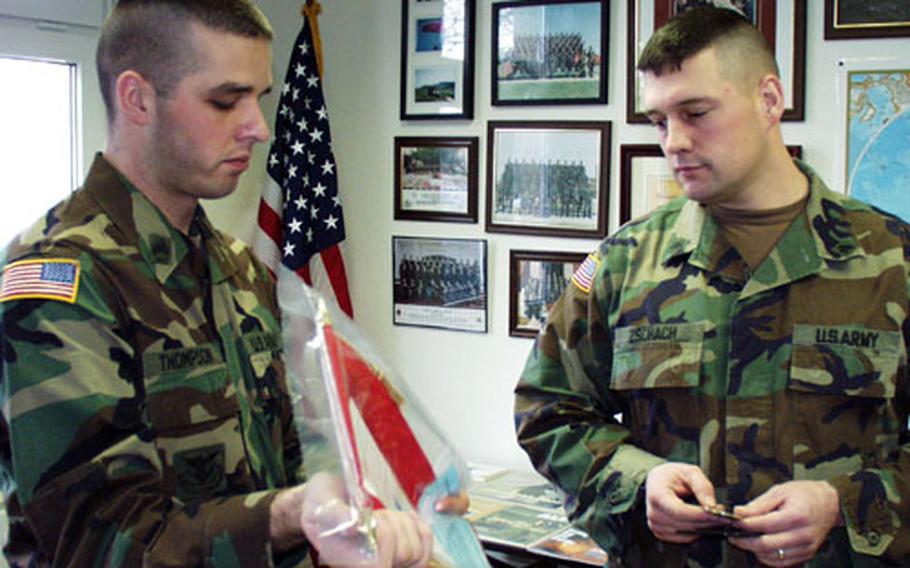 W&#252;RZBURG, Germany &#8212; Faced with a glut of midcareer soldiers, the Army is tightening standards and suspending some of its most popular re-enlistment programs.

The new &#8220;retention moderation&#8221; rules, imposed Jan. 15, will make it tougher for soldiers with blemishes on their service records &#8212; such as nonjudicial punishment, low test scores, poor evaluations or failed physical-training tests &#8212; to sign up for another tour.

&#8220;We will not deny any qualified soldier the opportunity to re-enlist,&#8221; said Sgt. Maj. James Vales, who heads the retention management department of the Army&#8217;s personnel command. &#8220;But soldiers who have deficiencies, or who have had deficiencies in the past, may not be the kind of soldiers we want to keep.&#8221;

The new rules also prevent mid-career soldiers (those on their second re-enlistment but with less than 10 years of service) who re-up in Europe to choose their next duty station in the United States. They also require soldiers who want to extend at their current duty station to sign up for three more years instead of two.

For stateside soldiers, the Army also has limited the ways soldiers can choose their next duty post.

For soldiers in Europe, losing the option of choosing their next stateside post hits where it hurts. It is by far the most popular of the five re-enlistment programs, chosen by 42 percent of those re-upping.

Over the next few months, that policy might cost the Army the services of soldiers such as Staff Sgt. Yolanda Singleton-Hood, 30, an eight-year veteran who works as a paralegal in a 1st ID legal office. She re-enlisted in December, before the new rules, because she was able to choose Fort Gordon, Ga., as her next duty post. She wanted to be near friends and, perhaps, post-Army career opportunities, in Atlanta.

But Singleton-Hood said a friend of hers who is entering her re-enlistment window may get out if she can&#8217;t go to the base of her choice.

Vales said the loss of post-choosing programs doesn&#8217;t necessarily mean a good soldier can&#8217;t go where he or she wants. But it does mean paying close attention to job postings and perhaps keeping in touch with the branch manager at the desired base to grease a transfer once the right opening does come up.

Thanks largely to a weak civilian economy, aggressive retention counselors, and perhaps a post-Sept. 11th burst of patriotism, the Army ended the last fiscal year Sept. 30 above its congressionally mandated strength of 480,000.

Stop-loss orders prohibiting soldiers from leaving the Army also boosted numbers slightly, though it affected only about 600 soldiers in a few crucial job specialties including cryptologic linguists, field artillery specialists and intelligence analysts.

The biggest reason for the overmanning was the huge success of Army retention offices last year, Vales said. According to figures from U.S. Army Europe, USAREUR alone re-enlisted about 8,000 soldiers last year, 1,500 more than its goal.

That gives the Army the opportunity to be a bit choosier about whom it keeps, after years of struggling to make its end strength. Last summer, it started limiting re-enlistment bonuses and cracking down on soldiers who waited until the last minute to re-up.

Under the new rules, soldiers with anything other than a perfect 10 re-enlistment code will need an OK from the first general officer in their command chain before they re-enlist. Those who mess up badly or repeatedly will be urged to leave the Army.

&#8220;We have given these soldiers the opportunity to request immediate separation since their careers are probably over anyway,&#8221; Vales said.

Staff Sgt. Mark Thompson, a 1st ID retention counselor, said the new rules have gotten the attention of soldiers now entering their nine-month window of re-enlistment eligibility. Because the changes are temporary, he said, some are waiting a few months to see if the rules are relaxed. Others, though, are re-enlisting now in case the Army makes them even tougher.

For contented soldiers such as Sgt. Dean Zschach, 32, a 1st ID infantryman, the new restrictions make no difference. He happily re-enlisted last week, even though getting what he wanted &#8212; six extra months in Germany &#8212; meant signing up for three more years instead of two. He thinks he&#8217;s still got a good chance to spend his next tour at the post he wants, Fort Carson, Colo.

An unexpected boost in re-enlistments for the past 18 months has left the Army overmanned. So the Retention Management Branch of the Army&#8217;s personnel office issued a series of &#8220;retention moderation&#8221; measures to discourage or delay re-enlistments.

&#8226; The &#8220;current station stabilization re-enlistment&#8221; option (which allows soldiers to extend at their current duty station) now requires re-enlistment for at least three years, instead of two.

&#8226; The CONUS Station of Choice option (which allows overseas soldiers to choose their next stateside duty station when they re-enlist) is suspended until further notice for midcareer soldiers.

&#8226; Re-enlistment options that include specific training will be limited by availability of that training.

&#8226; Soldiers who have entered their re-enlistment &#8220;window&#8221; (which lasts from 12 months to 3 months before their scheduled termination date) but have a re-enlistment code other then 10 may not re-enlist or extend. Those with codes of 9B, 9D, 9G, 9H or 9P may extend or re-enlist if the disqualification is overcome. The first general officer, or the general court-martial convening authority, may grant a waiver under certain circumstances.