Participants walk along the route that once served as the perimeter that U.S. forces defended against German military advances in December 1944. This was the 35th Annual Bastogne Historic Walk and the 68th anniversary of the siege. (U.S. Air Force)

Participants walk along the route that once served as the perimeter that U.S. forces defended against German military advances in December 1944. This was the 35th Annual Bastogne Historic Walk and the 68th anniversary of the siege. (U.S. Air Force) 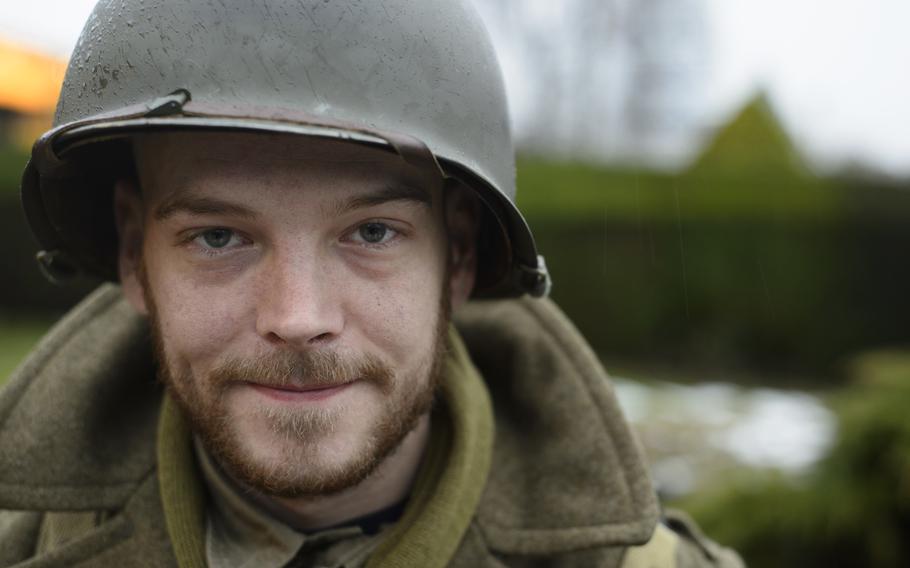 Steven Chasseur wears his U.S. uniform before the start of the Bastogne Historic Walk Dec. 15, 2012. For participants like Chasseur, who is from Limbourg, Belgium, wearing authentic uniforms from the World War II era serves as a way to preserve history. (U.S. Air Force) A World War II re-enactor sits along the Bastogne Historic Walk route at an aid station. Many of these history buffs try to get every detail about the uniforms correct. This soldier has a replica Colt M1911 pistol, Mk 2 "pineapple" grenades and a smoke canister on his uniform. (U.S. Air Force) 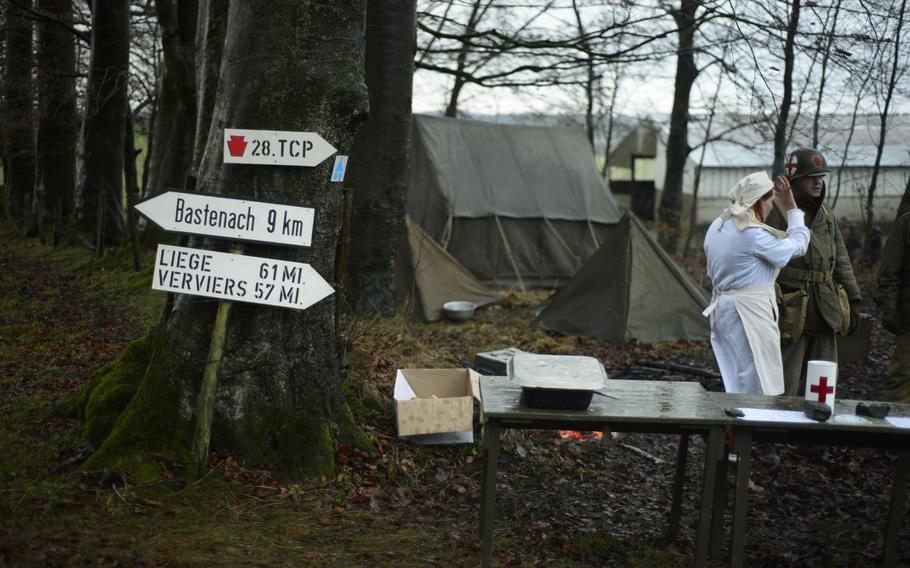 Re-enactors set up camp along the Bastogne Historic Walk route where U.S. forces defended against the German advance in December 1944. While some participants opt to stay in a hotel for the weekend, others decide to brave the frosty winter nights by camping outdoors. (U.S. Air Force) 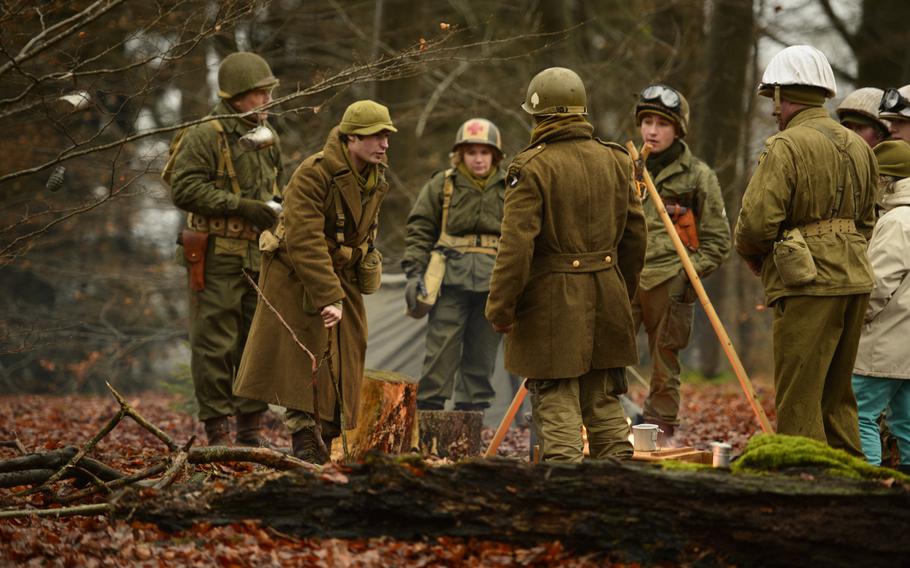 A World War II re-enactor tells a story to other participants as they warm themselves beside a fire during the Bastogne Historic Walk Dec. 15, 2012. The trend has become increasingly more popular in recent years, and there are even re-enactment camps where participants can spend the weekend surrounded by other history enthusiasts. (U.S. Air Force) U.S. Air Force Master Sgt. Kenneth Snyder, 52nd Fighter Wing command post, aims down the sights of a German-made machine gun during the Bastogne Historic Walk Dec. 15, 2012. Bastogne is about 110 kilometers from Spangdahlem Air Base, Germany, and has many monuments and memorials about World War II in the area. (U.S. Air Force) Luca Masceullo stands at the end of the 22-kilometer route of the Bastogne Historic Walk Dec. 15, 2012. Masceullo participates in events like this to better understand what the veterans actually experienced 68 years ago. (U.S. Air Force) 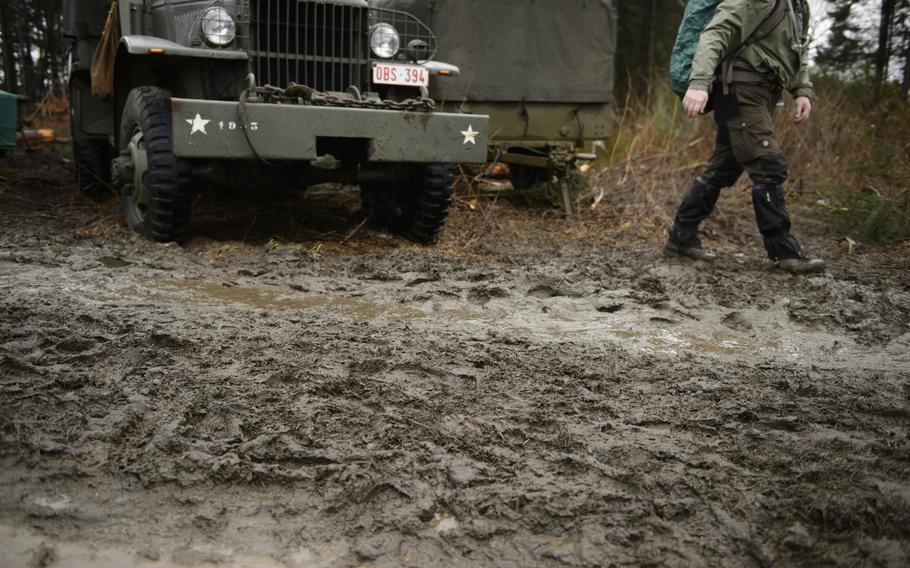 A supply truck sits in mud along the route of the Bastogne Historic Walk Dec. 15, 2012. There were three routes participants could walk: 7, 13 or 22 kilometers. The trails quickly turned soggy as thousands of participants walked the perimeter of the town. (U.S. Air Force)

The Belgian town of Bastogne holds its annual commemoration of World War II’s Battle of the Bulge this weekend, with walks and other activities honoring the American soldiers who defended the town from German forces.

This year marks the 69th anniversary of the German siege of Bastogne, a town that was seen by the allies as strategically important to German plans to recapture the Belgian port city of Antwerp.

American forces defending the town were surrounded by German troops and outnumbered 5-to-1, but they refused to surrender. The town was besieged from Dec. 20 to Dec. 27, 1944, when elements of the U.S. Third Army arrived.

To commemorate the battle, the town each year flashes back to its 1944 self, complete with period vehicles, uniforms and re-enactments. This year’s events include a parade, the laying of wreaths and the 36th Annual Historic Bastogne Walk.

The walk is offered in three distances – seven, 13 and 22 kilometers. Registration is required and can be done on site on Friday from 3 to 8 p.m., or Saturday from 7-9:30 a.m. Registration costs 6 euros per participant and includes a souvenir patch, a certificate of participation, a map, a historical booklet and a hot beverage along the route.

The starting point for the walk is just outside town at the Centre Sportif Porte de Trèves on Rue Gustave Delperdange in Bastogne. Parking is available on the street.

For more information (in French), visit www.bastogne.be and click on the picture of walnuts on the right side of the page.