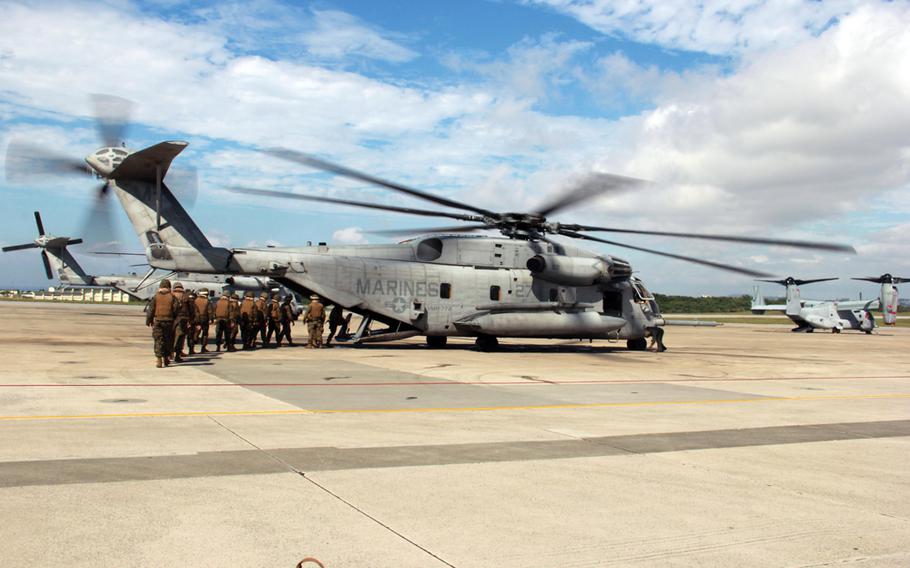 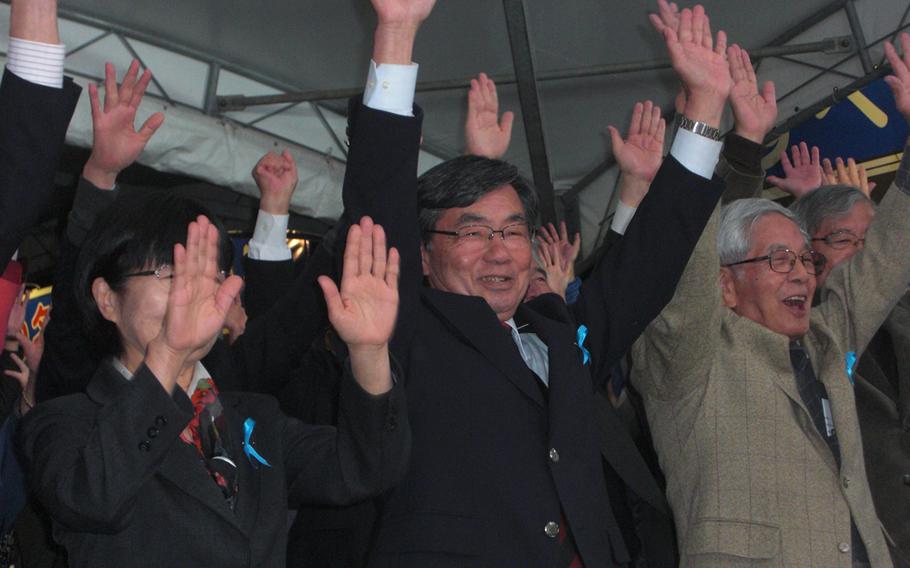 Susumu Inamine (center) celebrates re-election in the Nago mayoral election with his wife and supporters, Jan. 19, 2014. The incumbent Inamine, who opposes a planned new Marine Corps runway off the shore of Henoko in Nago, defeated Bunshin Suematsu, who supports the relocation of the Marine Corps air operations to Camp Schwab, with a runway to be built on a reclaimed land. (Chiyomi Sumida/Stars and Stripes)

Susumu Inamine, 68, offers thanks to supporters for his re-election in the Nago mayoral election, Jan. 19, 2014. Inamine, whose campaign promise was to block "at all cost" a planned Marine Corps air field in Henoko, defeated Bunshin Suematsu, 65, who supports the construction effort to move operations of Futenma Air Station from the heavily populated city of Ginowan. (Chiyomi Sumida/Stars and Stripes)

Susumu Inamine campaigned on the anti-base platform and beat out a candidate supported by Prime Minister Shinzo Abe’s political party in a local election that was widely seen as a referendum on the U.S.-Japan military realignment plan.

The election is likely to complicate or even stymie upcoming construction work on offshore runways needed to move Futenma air operations out of urban Ginowan city to a replacement base at the Camp Schwab Marine base in Nago.

The potential setback comes less than a month after Tokyo and Washington celebrated the long-awaited approval of runway reclamation permits by Okinawa prefecture after nearly two decades of planning, political friction and frustration over delays.

“The result of the election was a clear voice of the voters, who do not wish to have any additional military base,” said Inamine, who garnered 19,839 votes to 15,684 with 77 percent turnout. “I am resolved to use every possible means as the mayor to stop the landfill work.”

Earlier this month, Inamine said he may withhold the use of a city-administrated fishing port facility that is planned to be used as construction storage site or bar traffic by large vehicles such as heavy trucks and dump cars on city roads.

His election may also energize the island’s protest movement, which has held opposition vigils and attempted to block work at other U.S. military sites.

The Japan Ministry of Defense plans to complete construction work on the new Marine Corps airfield in Nago no earlier than 2019, according to recently filed construction documents.

The Nago election is an indication of the deeply complex political situation the U.S. and Japan face while trying to realign the large concentration of American military forces in the small southernmost prefecture.

The two allies formally agreed to move Futenma north to a sparsely populated bay in Nago in 2006 after years of anger and concerns from Okinawans over potential aircraft crashes and servicemember crime. Those tensions increased in 2012 with the deployment of the first squadron of Marine Corps’ hybrid MV-22 Osprey aircraft to Futenma.

Many Okinawans have balked at the relocation of the base and called for the Marine air operations to be removed from the island all together.

The opposition held progress at bay until Gov. Hirokazu Nakaima signed off on the construction permits in late December.

The governor’s decision sparked outcry. A group of residents filed suit this month that seeks to stop the base project, claiming construction will damage the coastal environment.