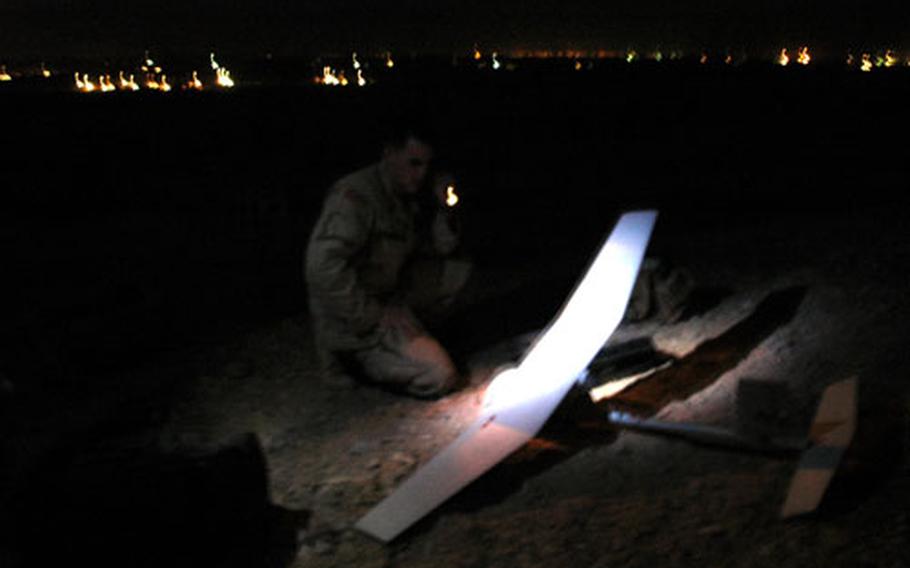 Spc. Coby Harris sets up a Raven unmanned aircraft before launching it for a surveillance mission over a road where insurgents have been setting roadside bombs. (Andrew Tilghman / S&S)

Spc. Coby Harris sets up a Raven unmanned aircraft before launching it for a surveillance mission over a road where insurgents have been setting roadside bombs. (Andrew Tilghman / S&S) 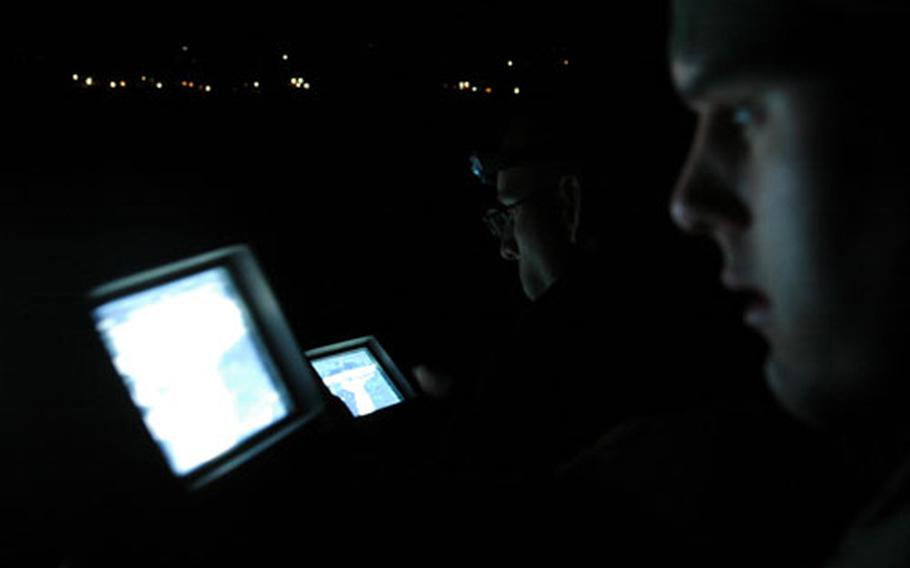 MUQDADIYAH, Iraq &#8212; Spc. Coby Harris was spitting Copenhagen tobacco into the dirt as he flew his plane over a desert road looking for any sign of insurgents.

&#8220;We&#8217;re just checking it out, making sure nothing is moving around,&#8221; said Harris, a 20-year-old Ohio native, as he sat on a rocky hilltop at night, staring at a hand-held screen and nudging a joystick lightly with his thumb.

Several hours before dawn, Harris and Spc. David Sinclair, 29, of Atlanta, were out navigating one of the latest tools in the fight against roadside bombs: a three-foot long, radio-controlled airplane.

Known as a Raven, the unmanned aerial surveillance device is helping soldiers keep watch over a treacherous stretch of rural road where bombs killed one U.S. and two Iraqi soldiers in the week before the Oct. 15 elections.

The Oct. 11 death of Staff Sgt. Matthew Kimmel, 30, a Special Forces soldier from Paxton, Ind., set in motion the two-week focus on the road, a secondary route used to access polling sites in the Muqdadiyah region.

In addition to the Raven flights, soldiers from Task Force 1-30 have used a mix of Bradley patrols, scout teams with snipers, and Apache helicopter sweeps to root out the small band of insurgents behind the attacks.

A sniper&#8217;s bullet killed one man. Heavy artillery fired from the base here killed the others in two separate assaults after surveillance teams targeted the men and relayed their location to the commanders, soldiers said.

In one case last week, Lt. Col. Roger Cloutier called an Army lawyer at nearby FOB Warhorse to ask whether a man seen behaving suspiciously after curfew should be shot.

The sniper posted near the road retained radio contact with the commander through his platoon leader and tried to keep the suspicious man in his sites while the shot was approved.

The Army lawyer ultimately approved the shot, but the process took nearly 10 minutes and by that time the insurgent had disappeared from site.

The road under surveillance was completely silent before dawn on Monday as Harris and Sinclair watched through the infrared camera.

Soldiers in Iraq began widespread use of the Raven last year. It requires line-of-sight contact, making hilltop launch sites and navigation ideal. The images captured by the small aircraft can be relayed to commanders at the tactical operations center if needed.

It&#8217;s unclear if all those responsible for the recent roadside bombs are dead or whether they were just temporarily scared away.