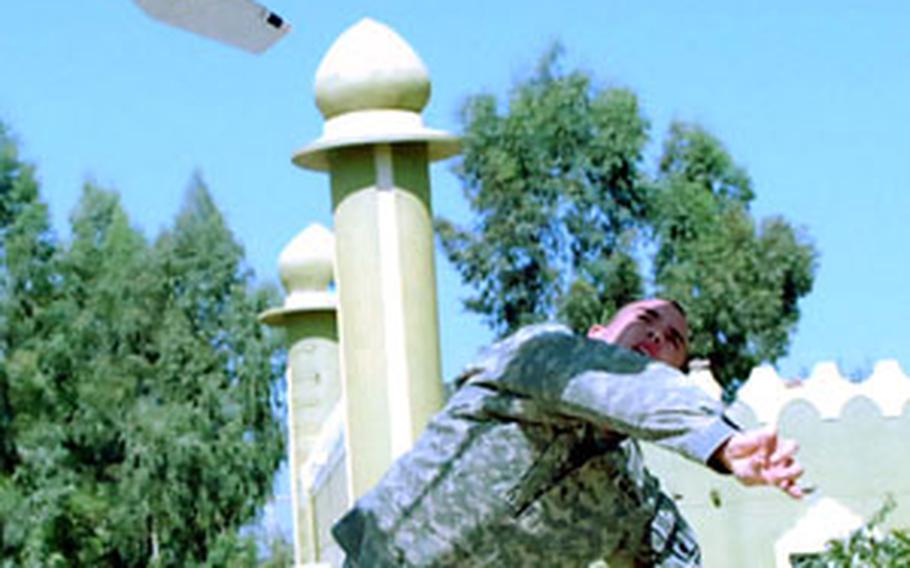 Sgt. Christian Muller, 23, of Pilot, Va., attempts to "launch" a Raven, an unmanned aerial vehicle used for reconnaissance by the U.S. Army in the war in Afghanistan. (Les Neuhaus / S&S)

Sgt. Christian Muller, 23, of Pilot, Va., attempts to "launch" a Raven, an unmanned aerial vehicle used for reconnaissance by the U.S. Army in the war in Afghanistan. (Les Neuhaus / S&S) Spc. Noel Sean, 21, of Sherman, Texas, looks at what the Raven unmanned aerial vehicle is seeing from above. (Les Neuhaus / S&S)

JALALABAD, Afghanistan &#8212; As winter approaches in the northeastern mountains of this rugged country, U.S. and Pakistani forces are making every attempt to learn the whereabouts of Taliban and al-Qaida fighters who jump back and forth across the border.

One tool helping the U.S. military is the Raven, a small, unmanned aerial vehicle that, with its multiple real-time cameras, offers a bird&#8217;s-eye view of any movements on the ground within a three- to six-mile radius of where it is operated.

This lightweight, reconnaissance-only, remote-control &#8220;plane&#8221; can help save the lives of soldiers who, 10 or 20 years ago, might have had to provide on-site surveillance for platoons or patrols looking to assault a designated area.

&#8220;It takes soldiers off the front line,&#8221; said Cpl. Erick Rodas, 21, who was selected to familiarize eight soldiers assigned to the 82nd Airborne Division and 173rd Airborne Brigade with the Raven.

&#8220;We have the capability to be where the enemy is, without sending men in first,&#8221; the Houston native continued.

The &#8220;front line&#8221; in this unconventional war is constantly evolving, making the Raven particularly effective. It can tell whether Taliban rebels are on the other side of a mountain that the troops want to traverse, for example.

In that case, Air Force fighter jets might be called in to drop bombs or strafe the insurgents.

However, along with its Predator counterpart, it has drawbacks. The Raven can be seen, and the Predator can both be seen and heard. The Predator is bigger and the power to make it fly compromises its stealth.

In Iraq, insurgents and civilians have figured out the Predator, but it still proves to be effective, according to military officials. The Raven, which is smaller, cannot be heard except when it is closer to the ground, so it has a slight edge. But it does not have a weapons-delivery capability, unlike the Predator and coming Reaper.

Troops say the Raven is fairly easy to operate.

He made the comments after having launched the craft on a successful training flight in Jalalabad. Ellis is a member of the 173rd Airborne&#8217;s brigade support battalion.

It can be carried in a backpack and assembled in as little as five minutes, according to Rodas.

The Army is training more troops on the Raven so they can operate it regardless of their duty in a war zone.

A remote-control panel operates the craft from the ground, while the operator watches a screen to monitor the Raven&#8217;s live video feed.