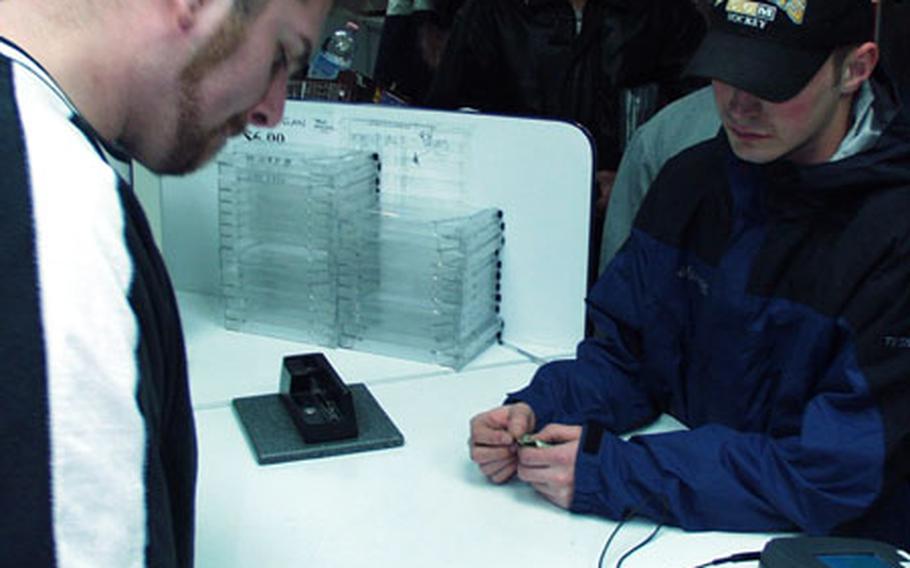 Jason Johnson takes Airman William Davis&#39; ration card at the shoppette on Area 1 at Aviano Air Base, Italy. In Italy, those with shopping privileges have to get their cards marked every time they purchase tobacco products and hard liquor on base. It&#39;s much the same at all countries in Europe where U.S. servicemembers are stationed, though the ration amounts vary from country to country. In Germany, coffee is also rationed. (Kent Harris / S&S)

Jason Johnson takes Airman William Davis&#39; ration card at the shoppette on Area 1 at Aviano Air Base, Italy. In Italy, those with shopping privileges have to get their cards marked every time they purchase tobacco products and hard liquor on base. It&#39;s much the same at all countries in Europe where U.S. servicemembers are stationed, though the ration amounts vary from country to country. In Germany, coffee is also rationed. (Kent Harris / S&S) 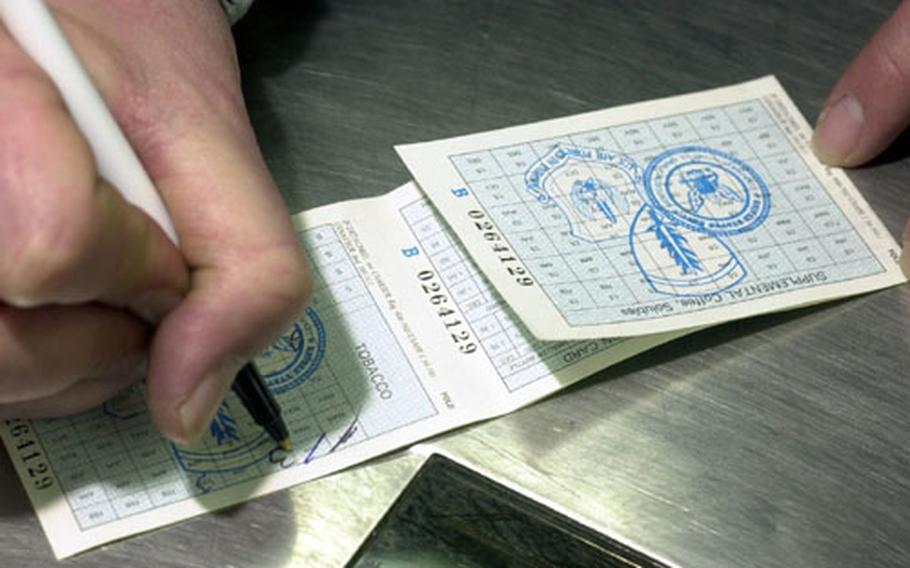 Gerald Fairbanks, a cashier at the Rhein-Main Air Base Commissary, Germany, marks off tobacco purchases on a customer&#39;s ration card on Friday. (Raymond T. Conway / S&S) 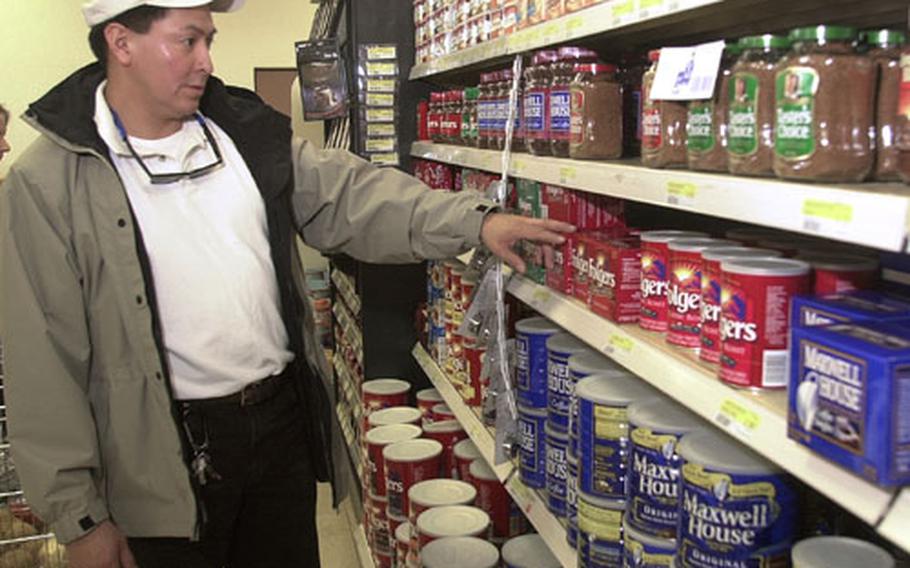 Paul Zale, a military spouse from Darmstadt, Germany, shops for coffee at the Rhein-Main Air Base Commissary on Friday. (Raymond T. Conway / S&S) 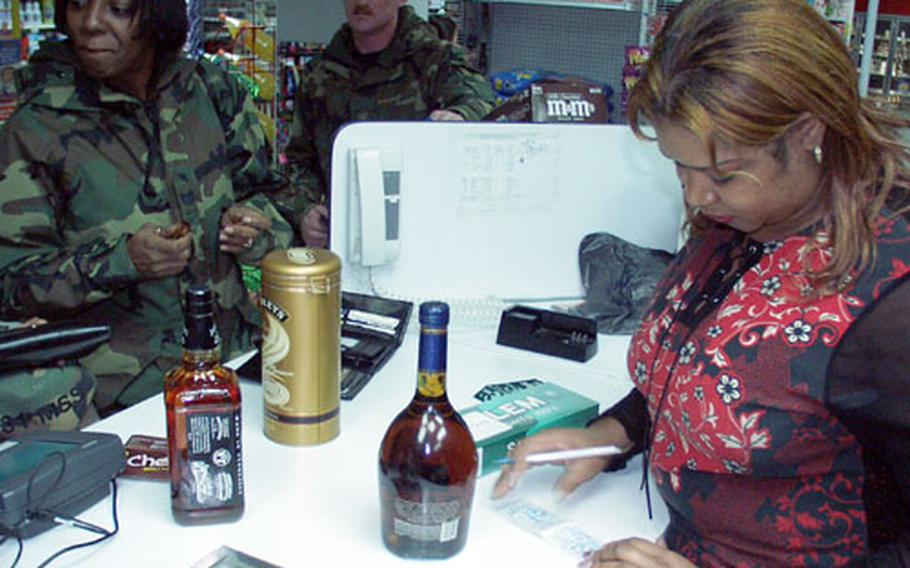 Kathy Wilson marks up a ration card Friday at the shoppette on Area 1 at Aviano Air Base, Italy. There&#39;s often a lot of card marking on Fridays, when people buy cartons of cigarettes and hard liquor for the weekend. (Kent Harris / S&S)

Ration cards. For some people, they sit in wallets or purses, accumulating more wrinkles than check marks. For others, they&#8217;re the primary method to get a regular supply of nicotine or liquor.

If you&#8217;re an adult and eligible to shop on American bases in Europe, chances are you have one. The allowances vary slightly from country to country, but agreements that the United States reached decades ago established a system to limit the amount of certain products that people can purchase on base.

Most of the agreements date from the 1950s when the continent was still recovering from World War II.

&#8220;Most of the items were &#8212; not only in Germany, but all over in Europe &#8212; not existing or much more expensive,&#8221; said Wilfried Rech, a legal adviser to the European headquarters of the Army and Air Force Exchange Service.

And, for the most part, those items are still limited today. In Belgium, Germany, Greece, Italy, the Netherlands, Spain, Turkey and the United Kingdom, monthly limits are put on how much tobacco products and hard liquor people can buy on base. In Germany, the list also includes coffee.

Though the idea of coffee being in short supply in Germany &#8212; and cigarettes and hard liquor being hard to find anywhere in Europe &#8212; might be laughable to some, it&#8217;s a serious matter for local governments and merchants. Ration items are generally seen as being cheaper, because they&#8217;re not taxed by the respective governments where bases are located.

And because of the various status of forces agreements with the host countries, it&#8217;s a serious matter for military authorities as well.

&#8220;The reason why there are rationed goods is because of the SOFA agreement that the United States and Italy entered into,&#8221; said Lt. Michael Turner, the staff judge advocate at NSA Naples, which administers the program in Italy.

He said the SOFAs are a good financial deal for Americans.

Gas rationing has been a contentious issue with many letter writers to Stars and Stripes, but more because of the amount that AAFES charges per liter (as compared to stateside prices) than the limits imposed.

Regardless, Americans pay considerably less at the pump under the program than their European neighbors do &#8212; who pay upward of $4 per gallon.

That&#8217;s not always the case with the items on the ration card.

Because of heavy taxes that the U.S. government has placed on cigarettes, they can be found off base in some countries at cheaper prices.

So can some hard liquors.

And Americans can buy as much hard liquor, tobacco and coffee at local stores as they like &#8212; at least as long as they have the money. But Davies said she couldn&#8217;t find her favorite cigarette brand, Salem Light 100s, at any stores in Italy.

So she&#8217;s become used to handing over her card to get the cigarettes.

In fact, there were few complaints about the cards during a Friday evening run to the shoppette in Aviano. AAFES employees Kathy Wilson and Jason Johnson asked those buying appropriate products to take out their cards, so they could mark them.

Airman Eric Pierre Isaacs had a different take on the purpose for ration cards.

Turner, the staff judge advocate in Naples, chuckled when he heard that response. But he said he thought the system was working if people were reporting that they weren&#8217;t having problems buying what they needed.

Most people don&#8217;t approach their limits &#8212; except possibly for gasoline &#8212; because when the limits were created, people were given a little extra each month so they could provide &#8220;customary gifts&#8221; for local national friends.

&#8220;These figures were taken into account by the Forces in determining the amounts of such products which would be available tax/customs free to affiliated personnel during each month,&#8221; according to a history on rationing in Germany supplied by U.S. Army Europe.

Today&#8217;s Europe, of course, is different from Europe in the 1950s. Depending on which studies are cited, some countries have higher standards of living than the United States does.

But that doesn&#8217;t mean that ration cards are going away anytime soon, authorities say.

An inquiry by the United States in 1995 to see if the provisions could be waived in Germany was politely rejected.

&#8220;Although there no longer are shortages in coffee, alcoholic beverages and tobacco products in Germany, these products are charged with high duties,&#8221; the letter from the German government said. &#8220;&#8230; the risk that these products are illegally passed on the German market is still very high.

&#8220;In addition, it has to be feared that an uncontrollable sale of the above goods in U.S. sales facilities will have a negative effect, i.e. a decrease in sales on the local shops, which could in the end also lead to a considerable loss in taxes for the German government.&#8221;

John Chaisson, an individual logistics support technician with USAREUR&#8217;s 1st Personal Command in Germany declined an interview for this article, but said in an e-mail through USAREUR that the German position hasn&#8217;t changed. He added that there &#8220;are no plans for future negotiations at this time.&#8221;

Turner said that while the cards may pose a small inconvenience for shoppers, he doesn&#39;t see any changes in Italy, either.

How far will your ration card go?

So what&#8217;s the maximum amount of goods you can get using your ration card?

It depends on a number of factors, including what country you&#8217;re stationed in, your marital status, and &#8212; of course &#8212; how much money you have to make those purchases.

The amounts vary by country and a few items are restricted in specific countries that aren&#8217;t in others.

In Germany, for instance, on-base customers are limited to five pounds of ground coffee each month.

Greece may have the most interesting restriction. The few U.S. servicemembers stationed there can buy only two decks of playing cards on base every three months.

For tobacco products and hard liquor, the restrictions are fairly similar, though there are a few differences.

In Belgium, servicemembers are limited to three liters of hard liquor &#8212; often defined as anything with at least 33 percent alcohol content. The United Kingdom is next on the most strict list, with a limit of four bottles of no more than a liter &#8212; though those with spouses are allowed two additional bottles.

In Germany, Greece, the Netherlands, Spain and Turkey, the limit is five bottles totaling 6.5 liters.

Italy is the most generous, allocating a maximum monthly purchase of six bottles that could total as much as 10.5 liters.

As far as cigarettes go, Greece and Italy &#8212; which each allow a maximum of six cartons (or 60 packs) &#8212; are the most generous. Belgium, Germany, the Netherlands, Turkey and the United Kingdom allow a maximum of four cartons. Spain falls in the middle by restricting on-base purchases to five cartons.

There are similar restrictions on other tobacco products such as cigars and cigarillos.

Some countries allow U.S. servicemembers to apply for supplements for certain products. In Germany, that could amount to two extra pounds of coffee each month.

And in Belgium, Germany, the Netherlands, Turkey and the United Kingdom, the card&#8217;s issuing authority can grant an additional two cartons of cigarettes. Supplement request must be made in writing.