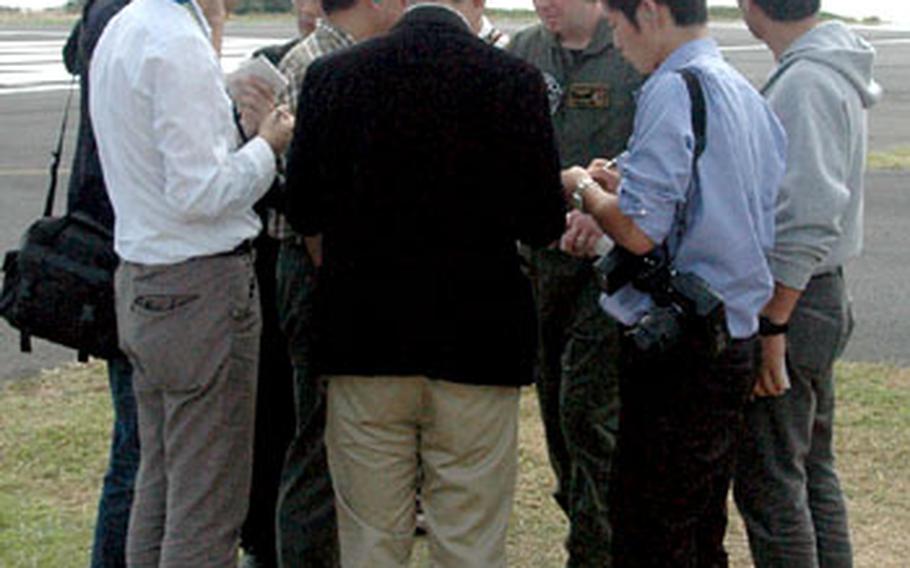 A faintly sulfuric odor hung in the air, hinting at the island&#8217;s volcanic origins. Hangar bays, with a couple of Japanese Maritime Self Defense Force helicopters, sat in front of rows of what appeared to be mostly-empty barracks.

Reporters and cameramen, hosted by Commander Naval Forces Japan, stood along the airstrip waiting for the first jet to land and were clearly surprised by the noise and force of the jet engines as the plane zoomed by.

Pilots of Strike Fighter Squadrons 102 and 27 on Tuesday flew in a six-plane pattern that formed an oval eight to 10 miles long and at least a mile wide around the island. Each jet took turns approaching and making touch-and-go landings to hone their skills prior to conducting at-sea carrier-landing qualifications scheduled for later this month.

According to 102&#8217;s Lt. Dan Radjcaj, the purpose of the FCLP &#8212; or field carrier landing practice &#8212; is to make sure the pilots are ready to safely land on an aircraft carrier by giving them more practice opportunities before doing the real thing on what amounts to a small, moving landing strip at sea.

Lt. Cmdr. Ray Owens said the training is required any time &#8220;the air wing has gone through a period of time without conducting carrier landing operations.&#8221;

At sea, the landing area is flanked on both sides by aircraft and personnel, Owens said. &#8220;Any mistakes can be catastrophic,&#8221; he said.

During night-flight operations, landings become even more difficult, Owens said. The moon and other ships can create the illusion of false horizons, effectively removing all visual cues the pilots use in daylight.