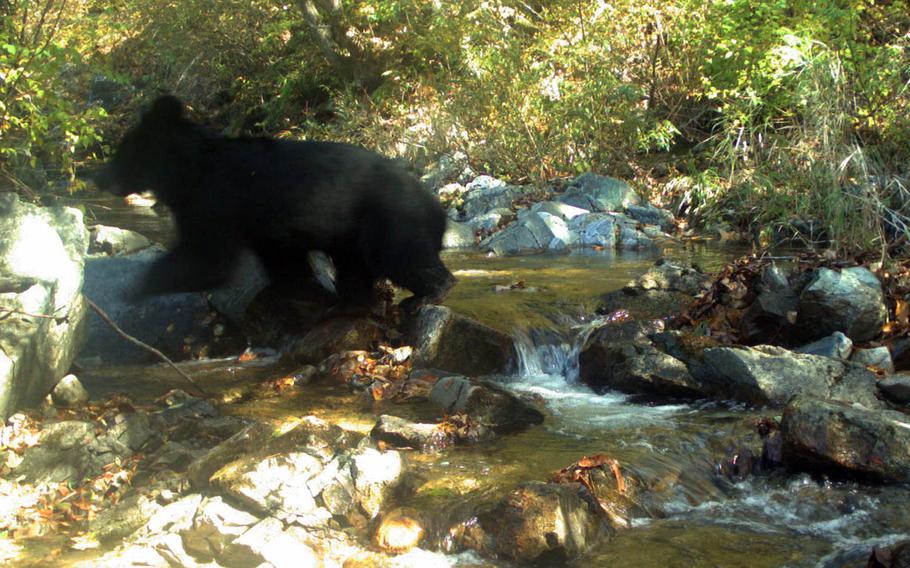 A rare Asiatic black bear cub has been photographed while crossing a stream in the Korean Demilitarized Zone. (Courtesy of South Korea's Ministry of Environment)

SEOUL, South Korea — A rare Asiatic black bear cub has been photographed while crossing a stream in the Demilitarized Zone, highlighting the heavily fortified Korean border area’s role as a unique haven for wildlife.

The photo of the bear, which was captured by a motion-sensor camera in October, emerged as the fate of the DMZ is in question amid efforts to improve relations between the two Koreas and persuade the North to abandon its nuclear weapons.

The 2.5-mile wide, 155-mile long strip of land has been largely a no-go zone for more than six decades due to land mines and barbed wire-lined fences in place since the 1950-53 Korean War ended in an armistice instead of a peace treaty.

Untouched by development, animals and plants have thrived with little human contact in the protected ecosystem that includes wetlands, forests, mountains and coastlines.

The bear is believed to have been about 8 months old, judging by its size, and most likely has parents and a sibling nearby, South Korea’s environmental ministry said as it released the image last week. The military, which monitors the cameras, handed over the photo in April.

The ministry also released a separate video it said was taken in 2016 showing a presumably different black bear along with other animals.

The ministry estimates that the area has an estimated 6,168 species of fauna and flora, including 102 considered endangered in South Korea, based on recent surveys and data gathered since 1974. Those include black-faced spoonbills, white-naped cranes, red-crowned cranes, musk deer, mountain goats and others.

The National Institute of Ecology also had 92 unmanned surveillance cameras installed in the area in 2014.

“The great ecological value of the DMZ has been proven once again by the confirmation of the Asiatic black bear,” he said in the May 7 press release. “We’re planning to … prepare comprehensive measures for the systematic preservation and management of the DMZ in the future.”

Asiatic black bears, distinguished by a white patch on their chest and known by the Latin name Ursus thibetanus, are on the International Union for Conservation of Nature’s red list of threatened species.

They’re also considered endangered in South Korea, where the population has rebounded from five in 2001 to 61 today thanks to a national recovery effort, according to the ministry.

Soldiers have reported seeing the bears in the DMZ before, but the photo provides proof.

“I think this is absolutely significant because seeing is believing,” Seung-ho Lee, the South Korean-born co-founder of the New York-based conservationist DMZ Forum said. “We talk much, but one picture of this bear is arousing a lot of interest.”

Nature has been threatened on both sides of the border due to rapid industrialization in the post-war South and foraging for fuel and food in the North, Lee said Tuesday in a telephone interview, calling the DMZ an “accidental paradise.”

The bear isn’t alone. Lee said footprints have been seen indicating other big mammals like tigers and leopards may be in the area.

“But people need to see the actual animal so it’s absolutely fascinating that the actual image of the black bear was captured inside the DMZ, not outside the DMZ,” he said.

Lee and others expressed concern that peace may be as much of a danger to the area as war, stressing the need to carefully manage any development.

The DMZ Forum has proposed designating the eastern section of the DMZ, which is the most remote with mountains on both sides, as a UNESCO World Heritage site.

The central section could be used for sustainable ecotourism and a possible peace memorial to commemorate the thousands of soldiers from all sides who were lost there during the war.

And the western section, which includes the truce village of Panmunjom and is closest to Seoul, could be turned into a peace park, he said.

“The two Koreas need to cooperate by protecting this region,” he said, while acknowledging that the fate of the DMZ is low on the government’s priority list.

President Moon Jae-in and North Korean leader Kim Jong Un agreed to disarm the DMZ and turn it into a tourism mecca during their first summit on April 27, 2018. But the initiative has stalled as nuclear talks stalled and recent missile tests by the North threaten to revive tensions.