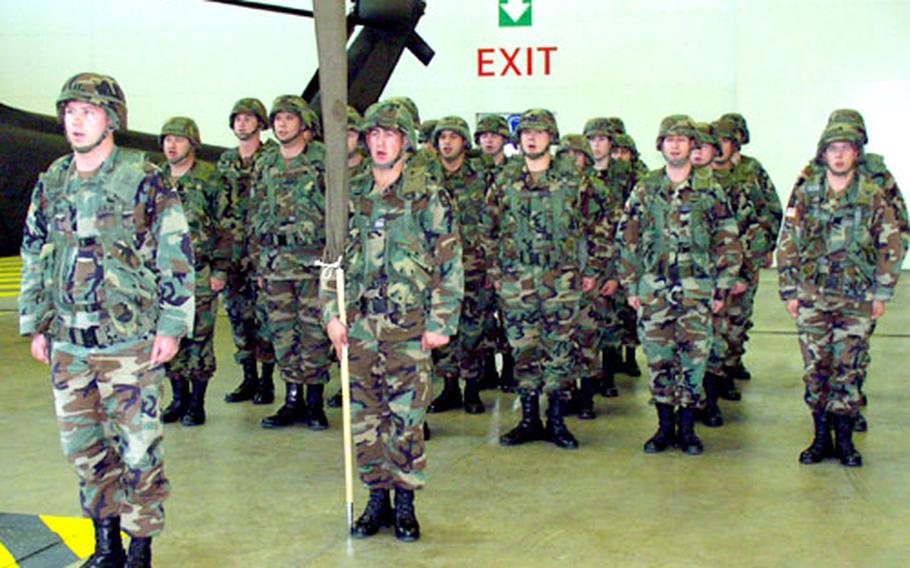 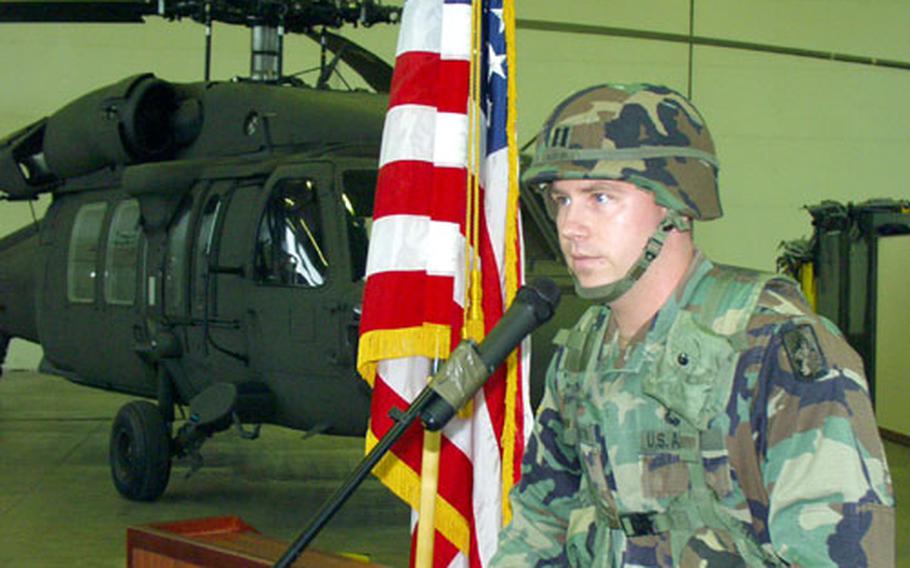 GIEBELSTADT, Germany &#8212; The Raptors of Company C have snagged their last prey.

Eight months after returning from a grueling year in Iraq, the UH-60 Black Hawk company &#8212; part of the Giebelstadt-based 5th Battalion, 158th Aviation Regiment &#8212; cased its colors Thursday at a deactivation ceremony.

The shutdown reduces the strength of the 5-158 Aviation from 24 Black Hawks to 16. The battalion is part of the 12th Aviation Brigade, whose job it is to move personnel and equipment for the Germany-based V Corps.

Tolzmann said Company C was supposed to be deactivated in 2003, but that was postponed because of the unit&#8217;s deployment to Iraq. He said no plans have been completed for the shutdown of any other Army aviation units.

Then, he said, the reconfigured aviation battalions will be attached to the new Army brigades that are currently replacing the division structure the Pentagon now believes is outmoded.

The company was organized in 1999 at Wiesbaden Army Airfield and moved to Giebelstadt the next year. In its short history, it deployed Black Hawk crews to Tunisia, Mali, Norway, Czech Republic and Poland before heading to Kuwait for Operation Iraqi Freedom in late 2002 and staying until February 2004.

Austin praised his troops for flying the highest number of combat hours of any Black Hawk unit in Iraq during the first rotation of Operation Iraqi Freedom, and also for fielding Task Force Gabriel, the Army&#8217;s first personnel-recovery task force. Between March and May 2003, Task Force Gabriel crews helped search for several downed aircraft, rescued an Army long-range surveillance team deep in Iraq, and ferried seven rescued prisoners of war to safety.

The unit spent the past several months packing up their helicopters for other units. Four of the birds already have been sent to Iraq, Hutmacher said.

All of the Company C pilots and soldiers are moving to other units within the 12th Brigade, so none will be leaving Giebelstadt. Still, they agreed it isn&#8217;t easy to see the Raptors disappear.

He predicted that, although they will move on and serve with other units, most troops in Company C will treasure their time there above all because of the wartime bond.